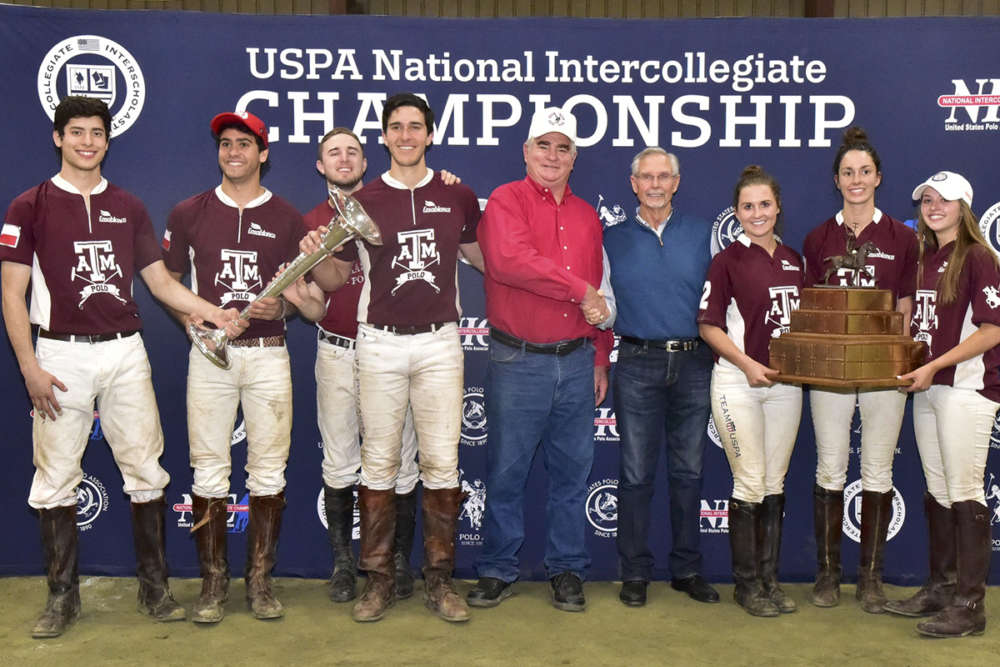 The men and women of Texas A&M University (TAMU) became the second team in history* to complete a rare double-double in the world of intercollegiate polo, sweeping the competition for the second year in a row to bring home the 2019 National Intercollegiate Championship title, held at the Virginia Polo Inc. in Charlottesville, Virginia.

The women’s final was a repeat match up of the 2017 and 2018 championship games. Texas A&M (Marissa Wells, Ally Vaughn, Hannah Reynolds) claimed their spot in the final with a win over California Polytechnic State University 20-3 and the University of Virginia (UVA - Demitra Hajimihalis, Meghan Milligan, Sadie Bryant) bested Cornell 19-17 to secure their finalist position.

Horses from Cornell proved to be an evening factor in the first chukker as each team tallied four scores; Marissa Wells** led the way for the Aggies (Texas A&M), while Sadie Bryant’s accuracy from the penalty line aided the Cavaliers (UVA). Texas A&M began to take control of the game when they mounted UVA horsepower for the second chukker. “We felt very confident on the UVA horses, since we’ve had the opportunity to play them a few times this year,” reflected Ally Vaughn. Wells sunk an additional three goals in the chukker, including the only two-point score of the game, to Meghan Milligan’s single score for UVA. The third chukker was similar to the second, another trio of goals from Wells and one for UVA from Bryant ended the half with TAMU on top 10-6. “The first half was very close,” Wells recounted. “We just slowly took the lead one goal at a time.” 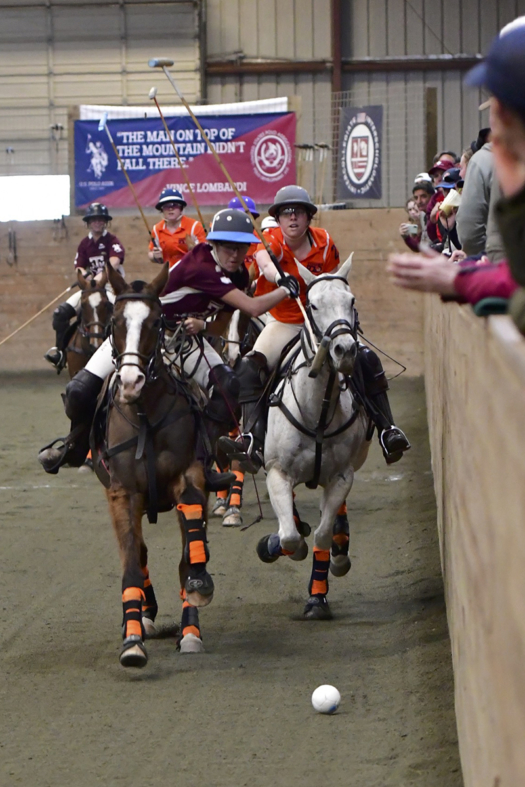 TAMU's Ally Vaughn leads the charge and prepares for a neckshot.

Stellar Aggie defense won the fourth chukker as they shut out the Cavaliers while adding four more goals to their total off the mallets of Wells and Vaughn. UVA, hustling to make a comeback, was rewarded with a Penalty 1 in the fifth chukker. Heading into the last chukker, the teams were assigned to horses provided from Wells’ mother, Kelly Wells, and the TAMU string included the well-known paint pony, Napoleon, who is scheduled to be retired from Intercollegiate/Interscholastic polo after this season.

“When I saw that I would end this game and both of our careers together in that final chukker, I was very emotional, I couldn’t believe it,” Wells recounted. “He has made an enormous impact on my career and I couldn’t have asked for a better ending.”

The duo added a final tally to their years of spectacular play, with teammates Vaughn and Hannah Reynolds each scoring from the field to match Milligan’s two for UVA, ending the game 20-9 in favor of Texas A&M University. 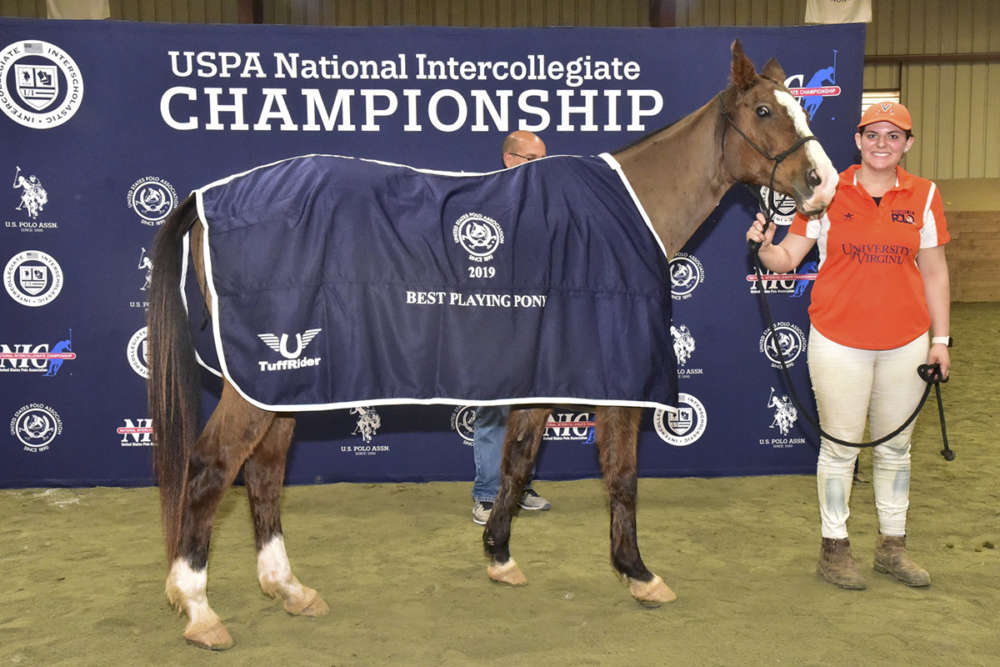 TAMU’s Wells and Reynolds, along with UVA's Milligan and Cornell’s Shariah Harris were named Women’s National All Stars. California Polytechnic State University’s Claire English was elected to receive the Connie Upchurch Award for sportsmanship for the women. UVA’s women’s string was voted by the players as Best Playing String and their mare Galleta won Best Playing Pony honors. 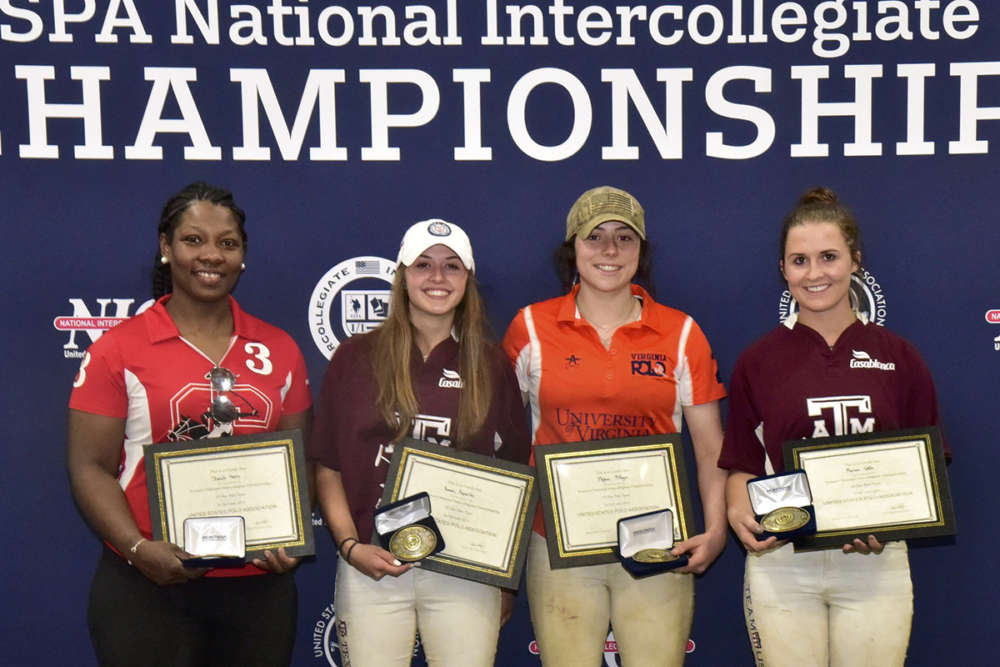 The seasoned Texas A&M men (Christian Aycinena, Fritz Felhaber, Mariano Silva, Colton Valentine) entered the arena as underdogs seeded number two to the undefeated freshman trio from the University of Virginia (Jack McLean, Nachi Viana, Brennan Wells). In semifinal action the Cavaliers fought off the team from University of North Texas in a 23-6 contest, while the Aggies squeaked out a win over Cornell 15-14 to garner final positions.

The Cavaliers came out firing in the first chukker, Jack McLean quickly opening up the scoring for UVA. Teammate Nachi Viana hit the first two-pointer of the game soon after and Brennan Wells added two goals of his own to give UVA the advantage 5-0. McLean found the goal once more before the Aggies could get on the board with a tally from Christian Aycinena to end the chukker. “We had to stick together when we were down by five in the first chukker,” recalled Mariano Silva. “We knew it would take one goal at a time to stay in the game.” 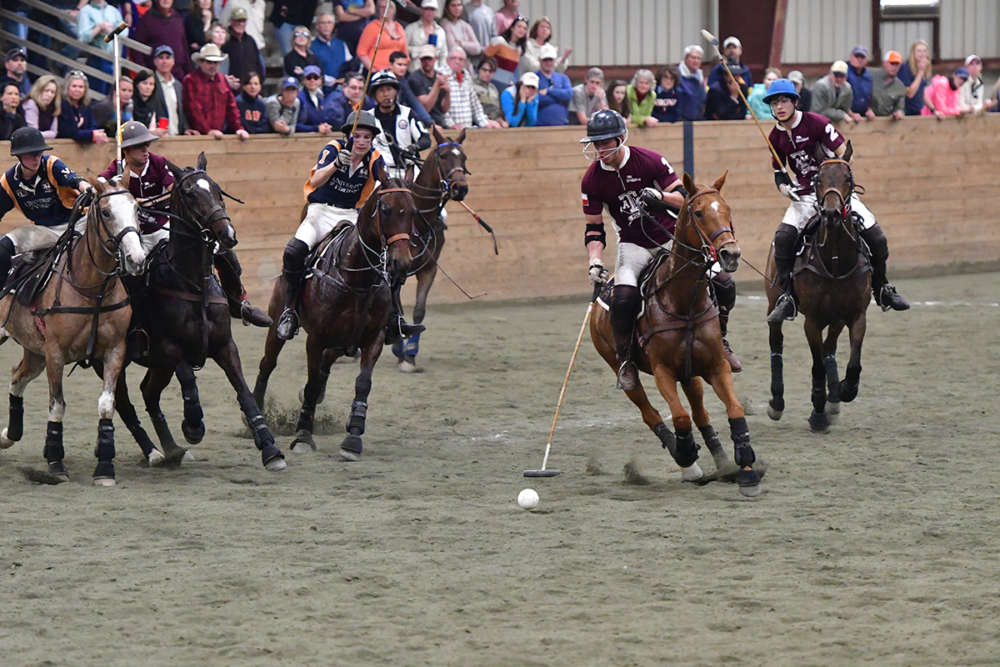 The second chukker proved dead even, with penalty conversions from Viana and Silva, and field goals from Wells and TAMU’s Fritz Felhaber. Viana began the third chukker with a massive two-point score out of the lineup to put the Cavaliers on top 10-3. Aycinena and Wells traded goals to maintain the gap between the two powerhouses, however the rest of the first half would be dominated by the Aggies. Silva nailed three goals, including a beautiful two-point shot, while Aycinena found the goal two more times before the end of the chukker to bring TAMU within two at the end of the first half 11-9.

Aycinena cut the lead to one from the penalty line to begin the fourth chukker, but McLean found his mark to widen it back to two. Back-and-forth goal mouth defense prevailed throughout the chukker, but two more scores from Aycinena tied the game 12-all heading into the fifth chukker. “We’ve played in a lot of close games this year against University of Kentucky, University of North Texas and Cornell yesterday,” TAMU’s Colton Valentine commented. “We knew we could make this game turn in our favor.”

The teams traded goals evenly in the fifth chukker, but Viana’s third two-point score of the game proved to be the difference to give UVA the lead by one moving into the last chukker 16-15. Aycinena equalized the score early in the sixth chukker then took the lead by one for the Aggies with a second consecutive score. Aycinena was countered by Wells and Viana to put UVA back in front 18-17. Felhaber tied the score for the last time and Aycinena popped in the go-ahead goal with minutes remaining in the match. With ice in his veins, Aycinena put the game out of reach with two penalty conversions to seal the win, 21-18 in favor of the Aggies. 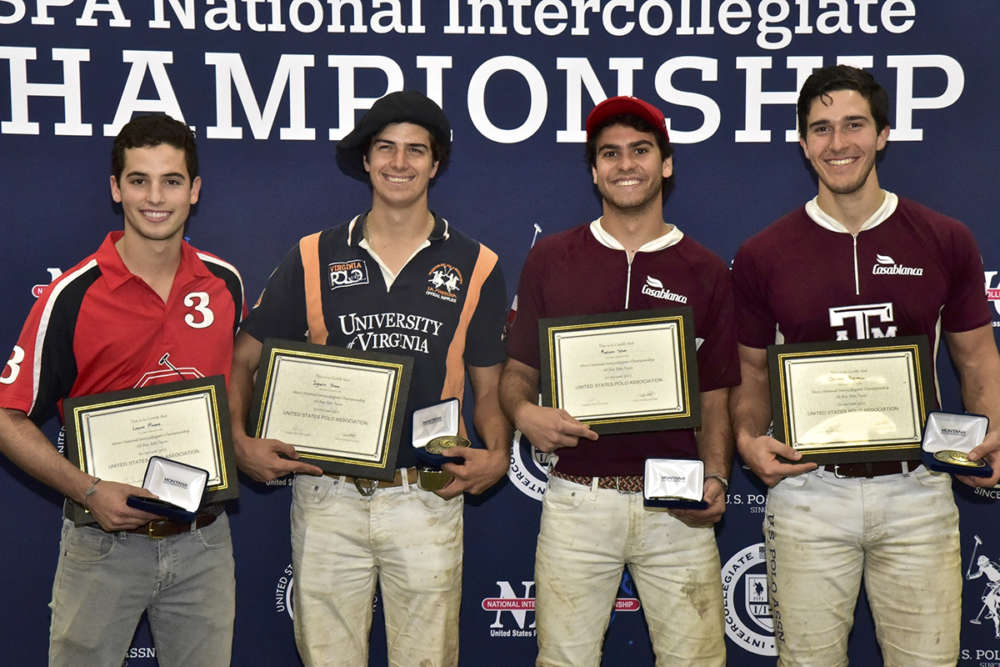 “We have been visualizing this win,” explained Aycinena. “After competing here a few weeks ago and losing, we’ve consistently been thinking about this game,” elaborated Silva. “We’ve been working out, practicing, and playing, all while imaging ourselves winning. Our desire to win has been enormous.” 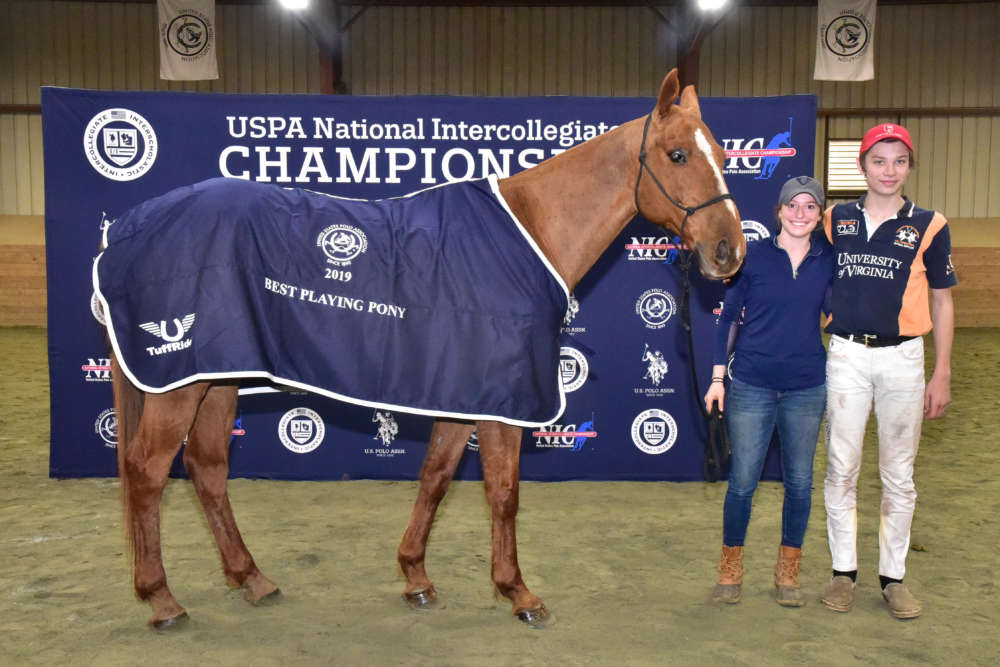 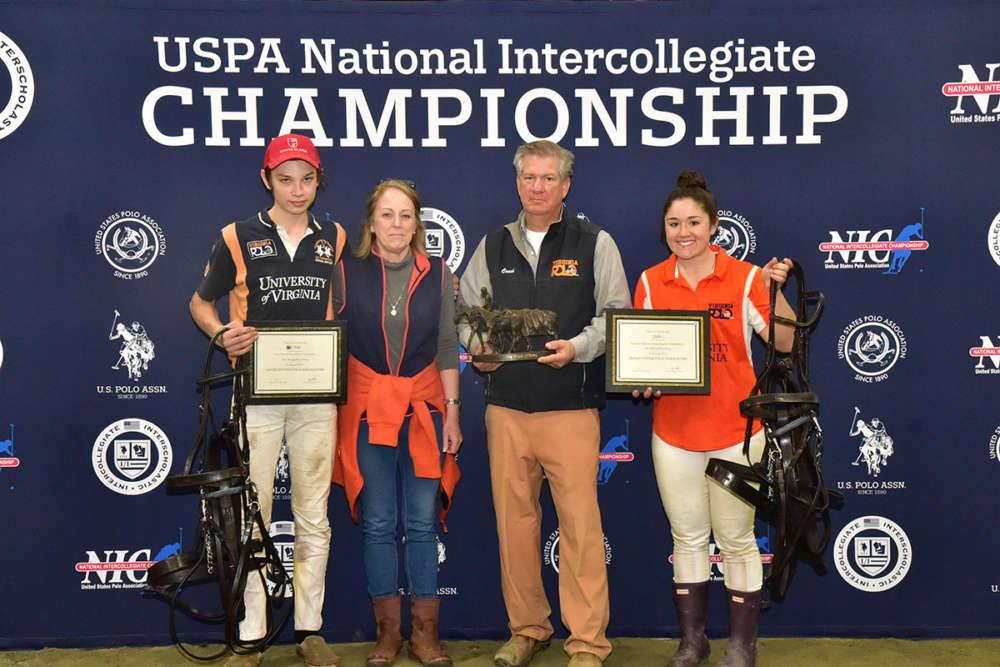 TAMU’s Aycinena and Silva, along with UVA's Viana and Cornell’s Lorenzo Masias were selected as the Men’s National All Stars. Andrew Scott from the University of North Texas was the recipient of the Connie Upchurch Award for sportsmanship for the men. UVA’s top string of horses was named Best Playing String and UVA’s Nemo was awarded Best Playing Pony. 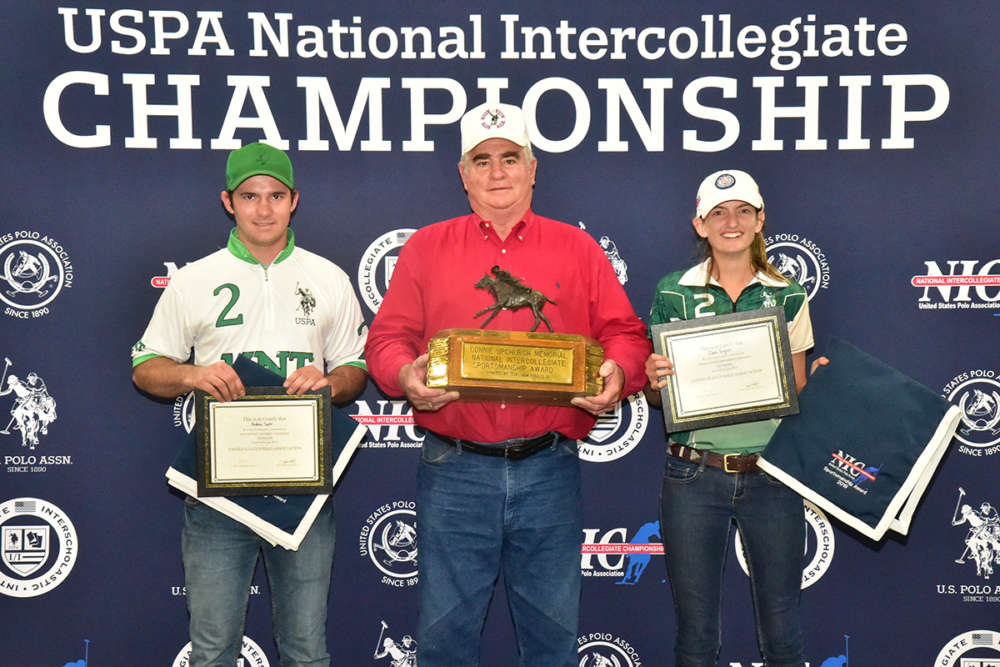 *The University of California Davis men and women swept the competition at the national championship in 1981, 1982, and 1983.

**Marissa Wells is a member of Team USPA. Team USPA is a USPA program designed to enhance and grow the sport of polo in the United States by identifying young, talented American players and providing mentored training and playing opportunities leading to a pool of higher rated amateur and pro players and the resultant giveback to the sport of polo.