2018 YEAR OF THE AGGIES: CLEAN SWEEP FOR THE MAROON AND WHITE 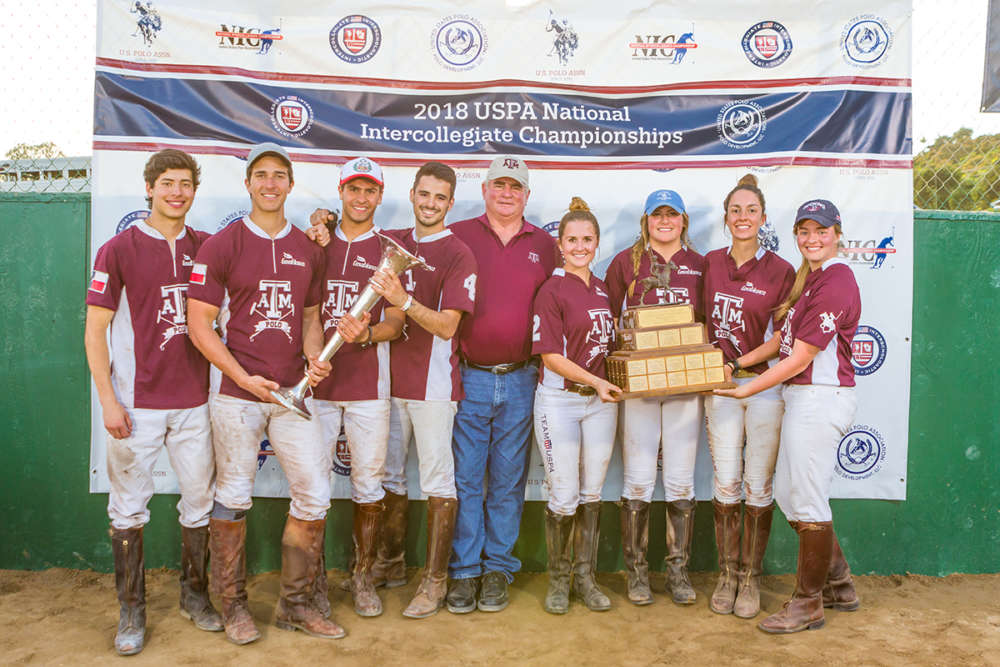 A historic moment in intercollegiate competition, both the women’s and the men’s Texas A&M University teams brought home the title, sponsored by U.S. Polo Assn. at the National Intercollegiate Championship (NIC) Finals, held on Saturday, April 7, at the Santa Barbara Polo & Racquet Club (Carpinteria, California). In the women’s final, Texas A&M easily rode away with the win 14-5 over University of Virginia (UVA), garnering their third national title after a 23-year dry spell. The men’s final proved a bitter battle until the last, TAMU men fighting back in the fourth chukker to tie the score. A powerhouse since the early 1990s, after six grueling rounds of penalty shootouts, they pulled off the win, dashing Southern Methodist University’s (SMU) national title hopes for a second year in a row. 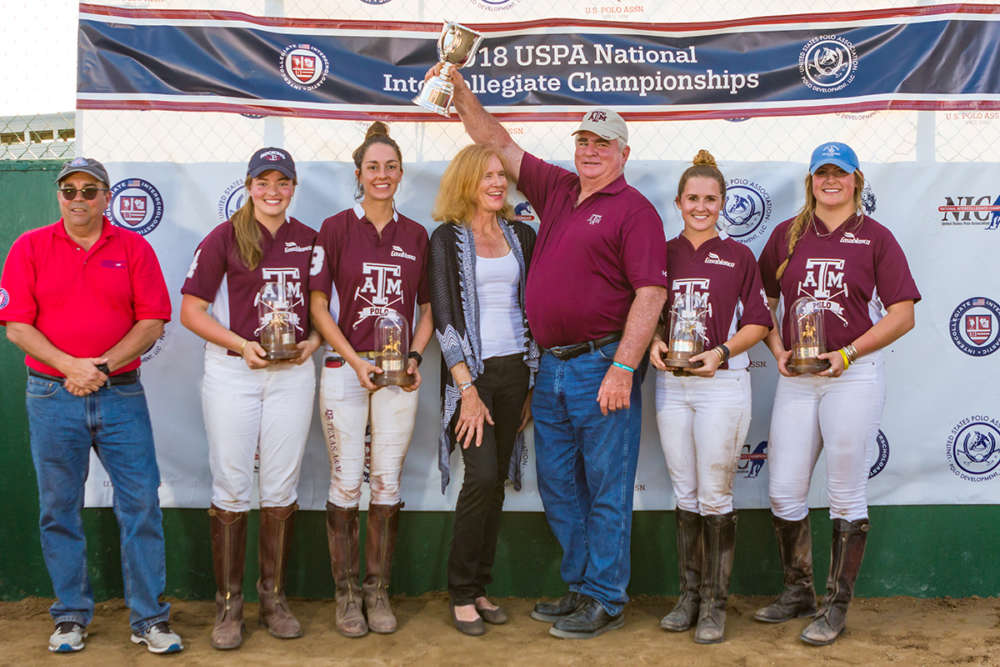 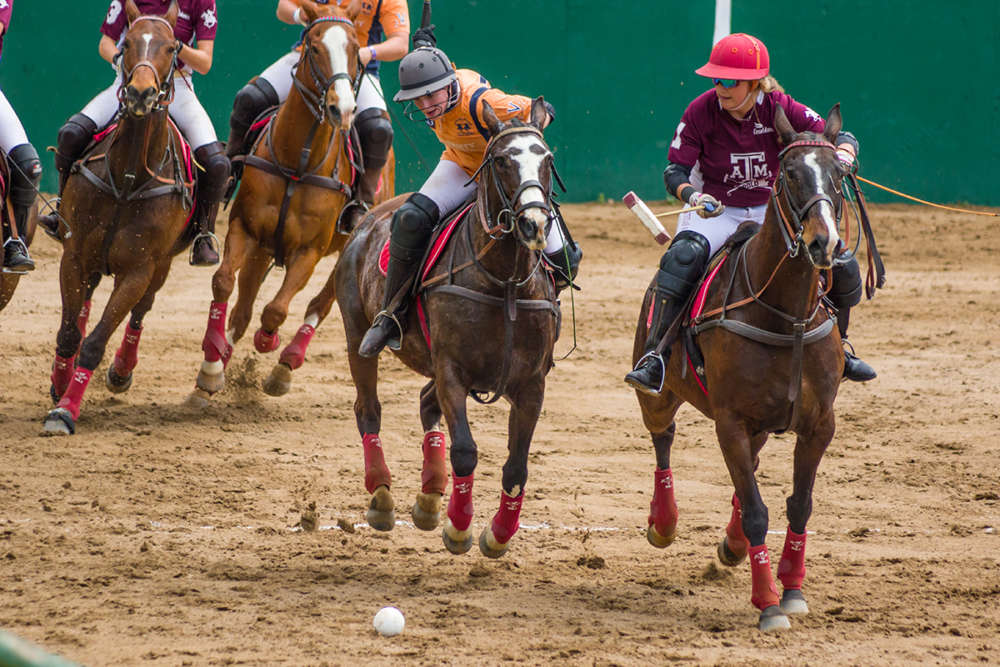 Play was powerful from the start, as both teams fought hard for control riding Cal Poly’s quick horses. Unstoppable on offense, Texas A&M’s Marissa Wells* scored four unanswered goals in the first while her teammates successfully defended UVA players, clearing her way. The second chukker was characterized by choppy play and numerous fouls. “They played good,” said Texas A&M coach Mike McCleary. “We had a few more fouls than we would have liked, but they played good. We are looking forward to next year already. It was a good season, they worked hard all year long to get here and did well once they got here.” Three consecutive goals for Texas A&M, all off of Well’s mallet, gave the Aggies a substantial lead midway through the second. After the second chukker walk break, UVA came together thanks to accurate penalty conversions by Jessica Schmitt and Sadie Bryant to end the first half 7-2 with Texas A&M on top.

Play resumed in the third with a skilled shot to goal from Texas A&M’s Ally Vaughn who effectively carried the ball on the nearside then switched to the offside to score. She was quickly followed up by Wells who made her eighth and ninth goals of the day. Despite trailing by eight goals, UVA’s spirits were not dampened. Back-to-back UVA field goals by Schmitt and Bryant helped get UVA back in the game to end the third 10-4 in favor of Texas A&M. Although UVA began to find their groove, it was not enough to overcome Texas A&M’s offensive onslaught. The Aggies added four more goals to the tally in the fourth, two from Kendall Plank, to get all three players on the board. UVA countered with only one from Katie Mitcham before the final horn sounded to end the game 14-5 crowning Texas A&M the 2018 National Intercollegiate Women’s Champions. 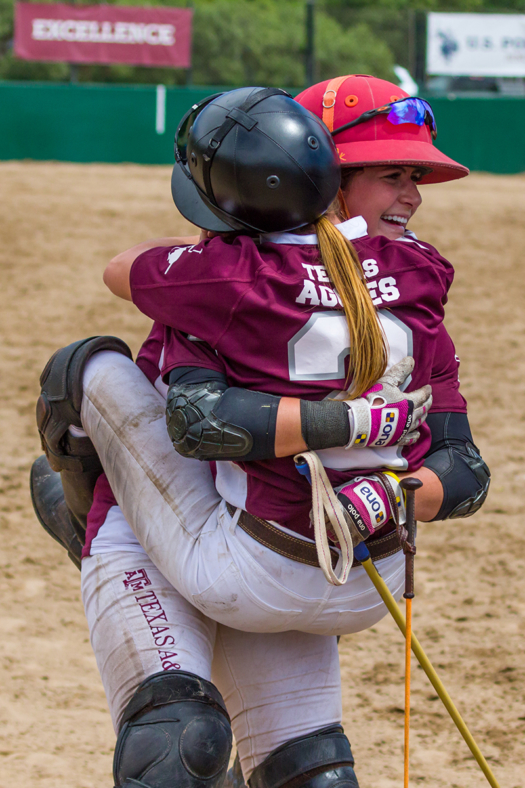 The win held special significance for Plank who is a graduating senior this year, “it means the world to me, we have been in the finals for the past two years, and we lost in the finals both years, so this is a huge moment for me.” When asked what she will miss most about college polo Plank replied, “just being with my team, having this connection, and being able to travel and meet new players. It is so much fun and an experience that I will never forget." 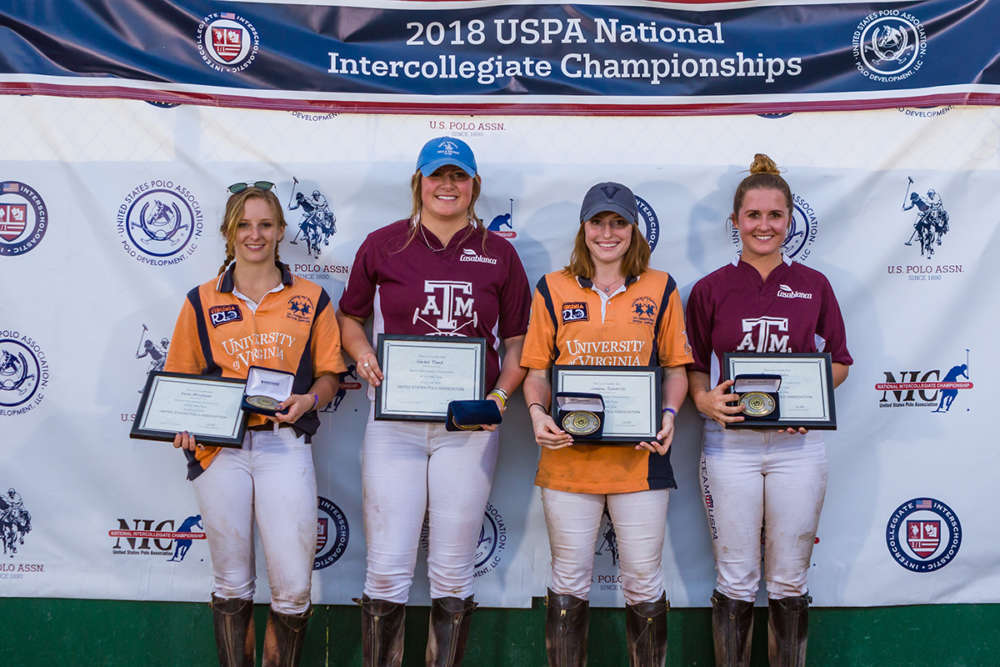 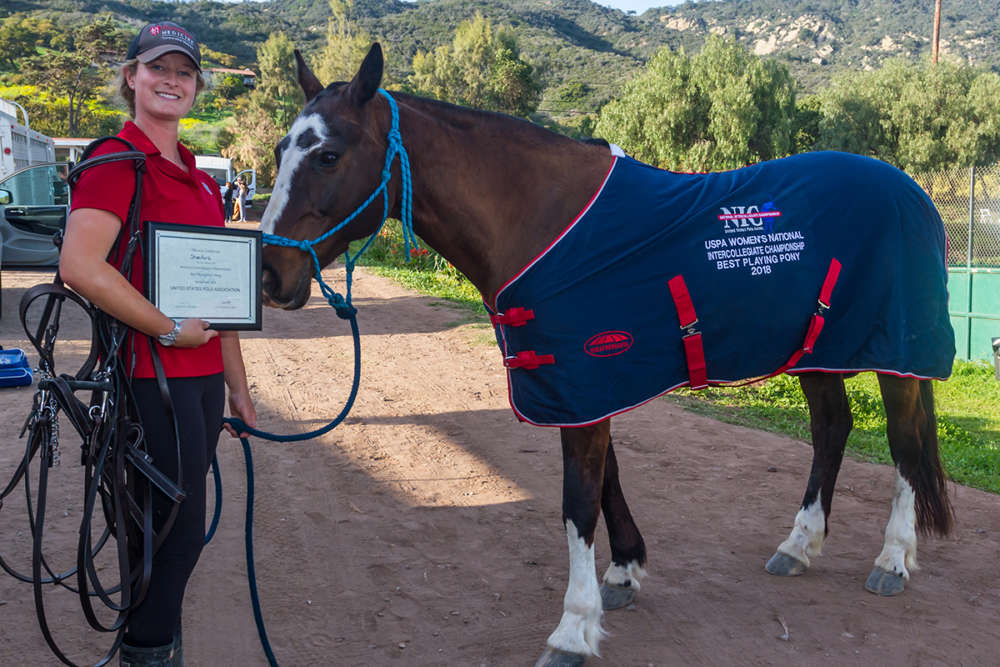 *Marissa Wells is a member of Team USPA. Team USPA is a USPA program designed to enhance and grow the sport of polo in the United States by identifying young, talented American players and providing mentored training and playing opportunities leading to a pool of higher rated amateur and pro players and the resultant giveback to the sport of polo. 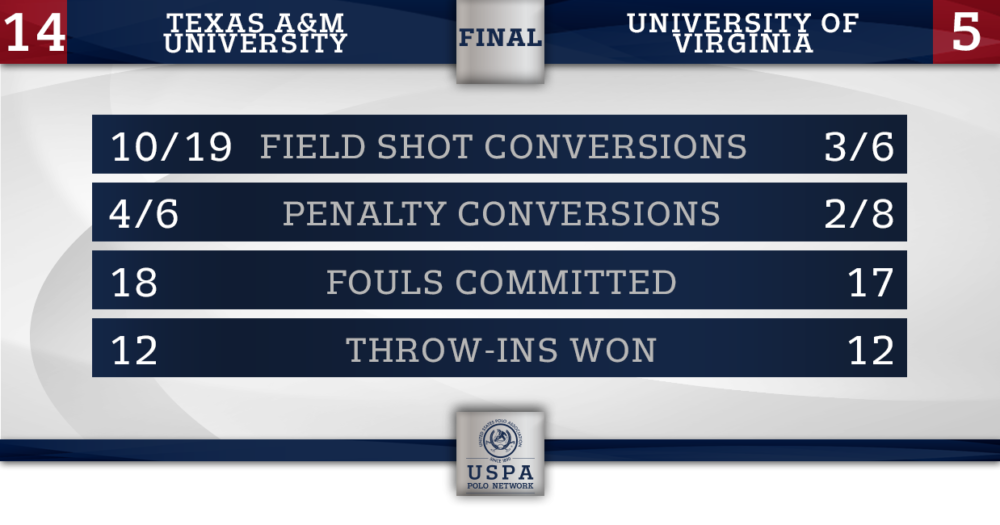 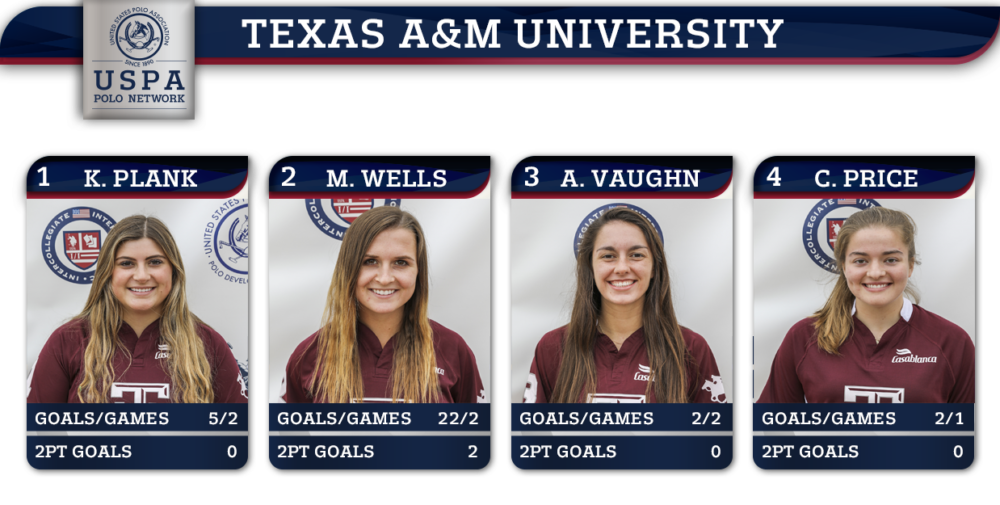 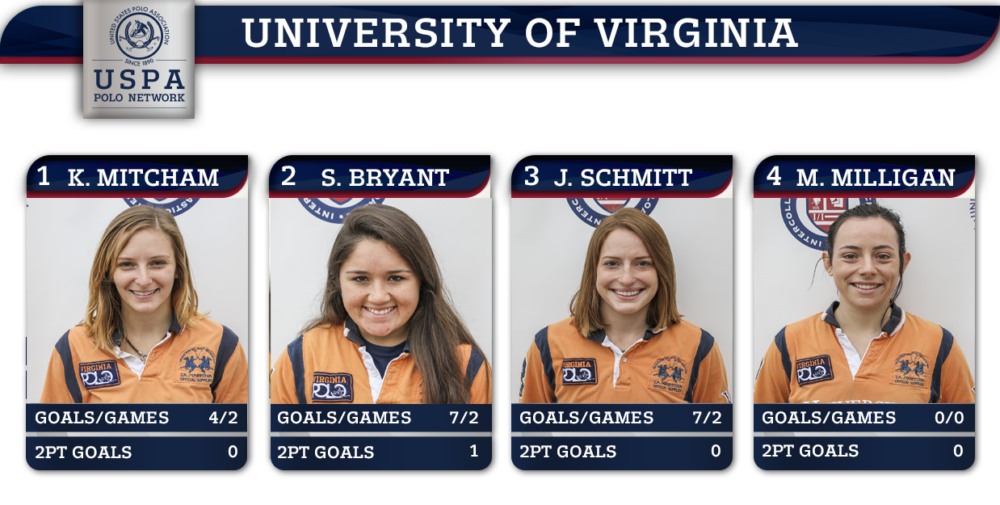 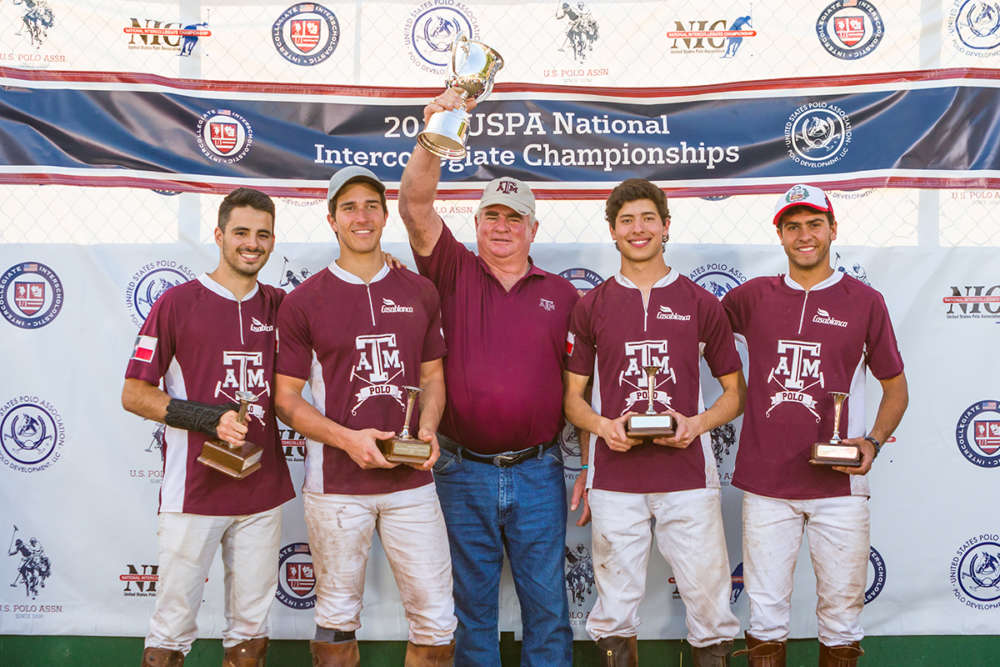 SMU arrived at the final after conquering Cornell 14-9 in semifinal competition. Making their first NIC final appearance last year, SMU were eager to prove their worth and found themselves once again face-to-face with the opportunity to make intercollegiate history by capturing their first university title. Pitted against SMU, and equally as passionate to recapture their 2016 title, the formidable Texas A&M, edged past their semifinal opponents UVA 13-11 to secure their final position. Each team on a mission, sparked by more than just friendly rivalry but a valiant campaign, an exhausting game pursued between the evenly-matched squads. Ultimately, the game was decided after a demanding six rounds of overtime penalty shootouts, during which Texas A&M prevailed 13-12. 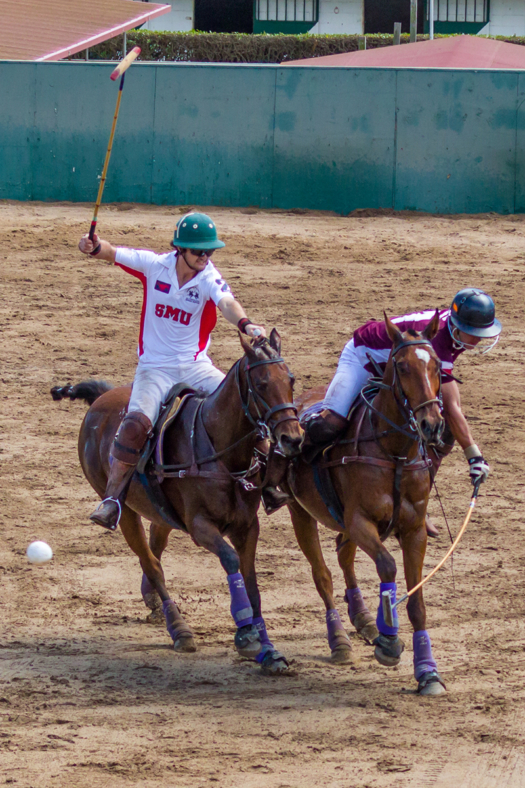 Trading goals, offensive powerhouses Christian Aycinena (Texas A&M) and JT Shiverick (SMU) dominated first chukker play, a trend that would pervade throughout the entire match. After the first walk break however, Shiverick crushed two field goals to give SMU the lead moving into chukker two 4-2. Not to be outdone, Aycinena countered with two of his own in the second to equalize the score 4-all. Once again, SMU would shine after the walk break, and working cohesively with renewed energy scored three combined field goals, each player contributing to the scoreboard. A goal from Aycinena in answer kept Texas A&M in the game to end the half 7-5, trailing by two.

SMU continued their forward momentum outscoring Texas A&M in the third, substituting Michael Armour for Jake Klentner, to widen the gap and lead 10-7 entering the final chukker. Feeling the pressure, Aycinena rose to the occasion scoring the only two-pointer of the game at the onset of the fourth to close-in on SMU. He was followed up nicely by Fritz Felhaber who equalized the score 10-all. Mirroring first chukker play, Shiverick scored two consecutive goals to regain the lead, but Aycinena struck fast to bring the score within one. As time ran down, SMU Coach Tom Goodspeed swapped out injured Shiverick for Klentner. Aycinena’s quick stick scored the final equalizing goal which forced the game into an overtime penalty shootout for the second year in a row.

Three rounds of penalty shootouts each with two successful conversions, one from each team, sent the game into a fourth overtime penalty shootout. Both teams buckling under the influence of stress and fatigue, the fourth round shoot out proved a bust, neither team claiming a goal. The fifth round shot par for the course, Shiverick and Felhaber effectively scoring for their teams, however tied once again the match went into an unbelievable sixth round of penalties. SMU failed to capitalize on their two penalties of the round, while Mariano Silva nailed a booming shot straight to goal and Felhaber followed suit to cement the win for Texas A&M 13-12.

Despite the win, Texas A&M Coach Mike McCleary admitted the suspenseful afternoon was not ideal and was stern in his plans for the young team. “I told them that when we get home, we are going down to the river with a bucket full of balls, a painted line down the middle of the field, and on the grass we are going to hit a bucket of balls at a cone until they can hit the cone at thirty yards nine out of ten times. That’s what we used to do to practice penalties and we are going to have to do it again.”

Game high-scorer Aycinena, with 10 goals on the day, reflected on the win and the power of visualization. “It feels great; we have visualized this since last year. We went out to dinner to Chilis, we took a picture even, and wrote it down that we were going to be national champs. Once you mentally visualize it, I think you can achieve it through hard work." 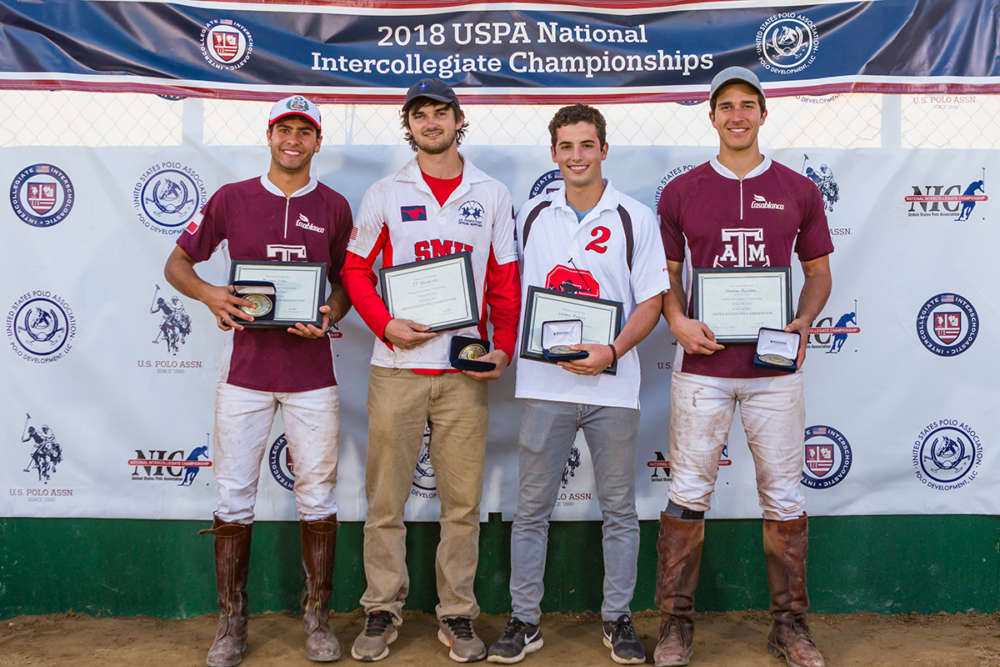 McCleary gave some final thoughts on the game and sage advice for players of all ages. “Both teams, had some breakdowns and both teams had some really brilliant plays. It was just a matter of not giving up, you don’t quit just because you are down, you give it all you’ve got.” 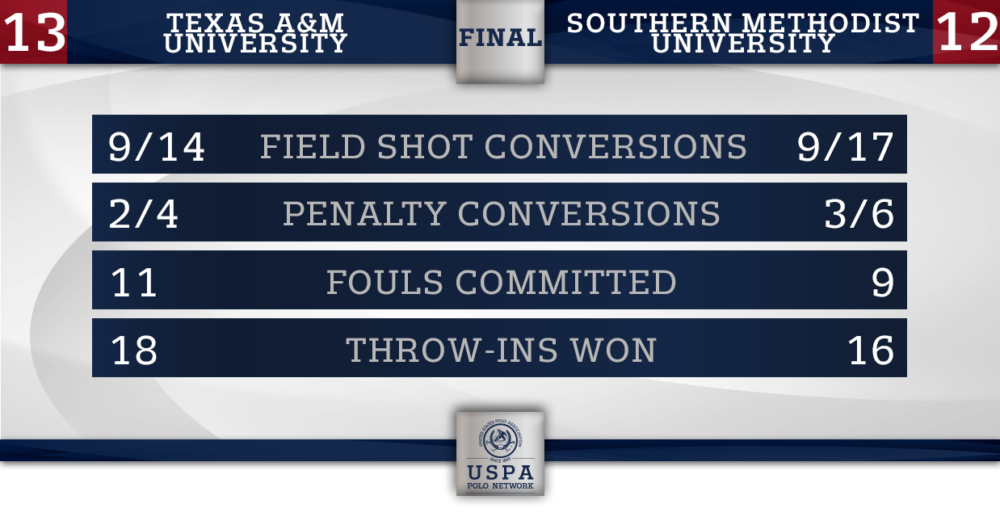 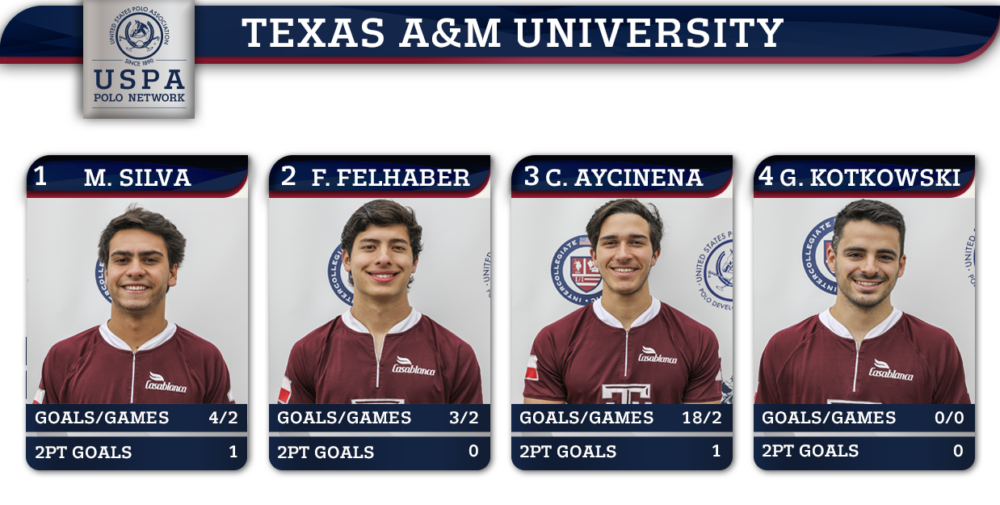 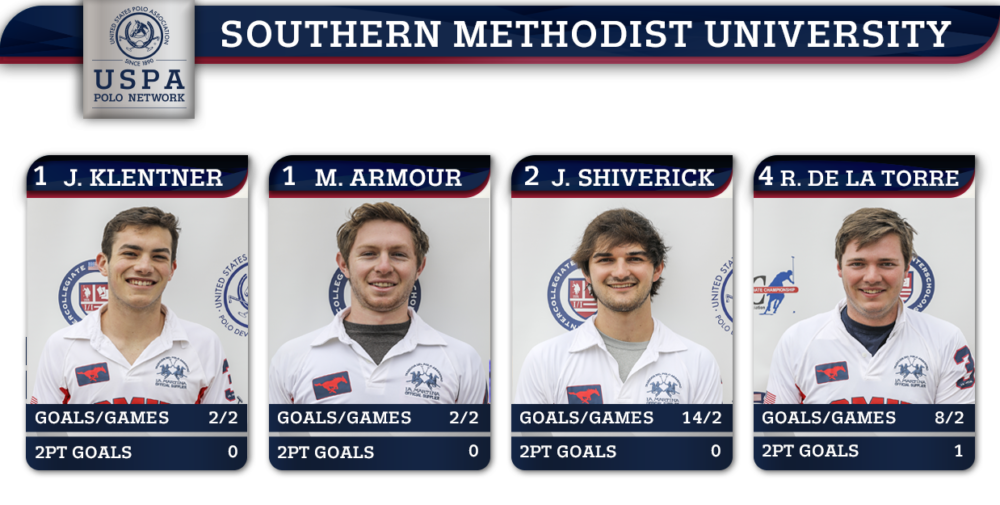 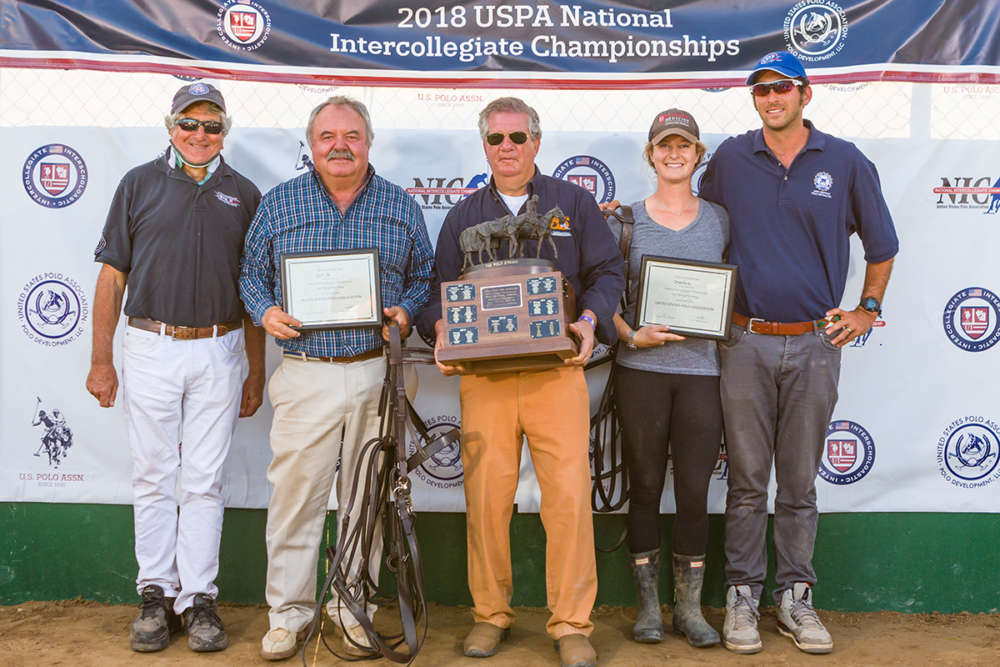 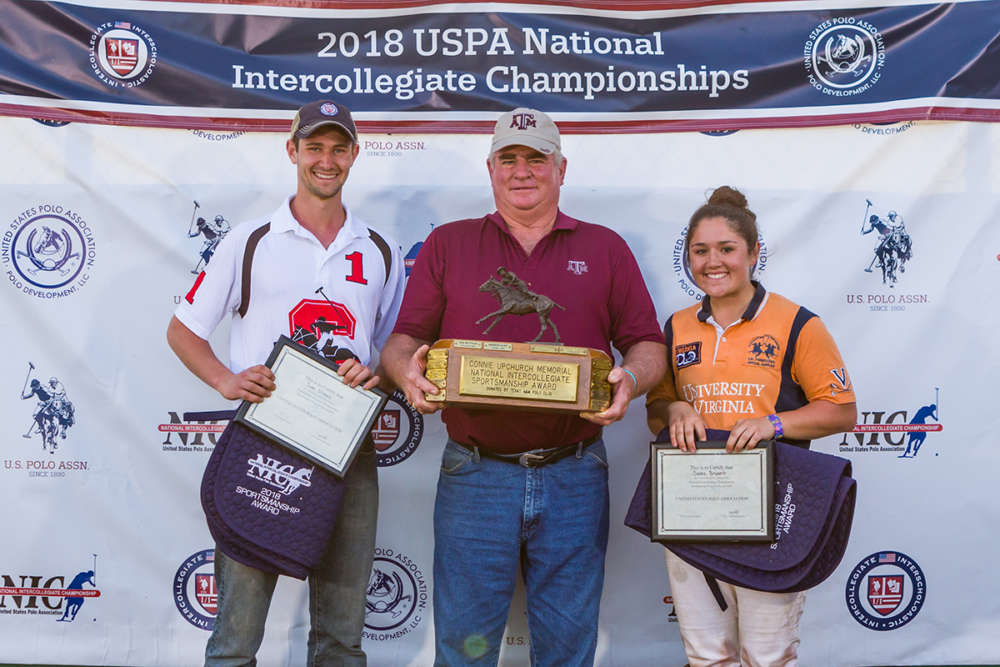