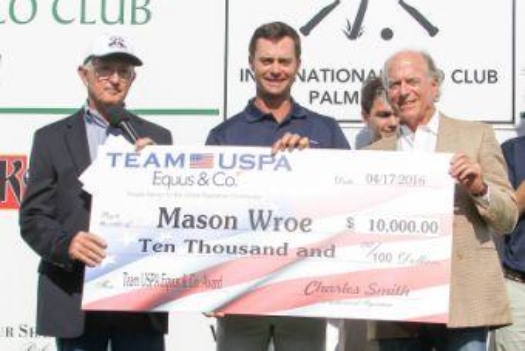 Wellington, Fl. – The United States Polo Association (USPA), the governing body for the sport of polo, and Equus & Co., the private advisor to the global equestrian community, announced Mason Wroe as the 2016 Team USPA Equus & Co. Award recipient on Sunday, April 17 at the International Polo Club Palm Beach. Wroe was honored with the annual award and $10,000 for his outstanding leadership and commitment to growing and giving back to the sport of polo. Team USPA members CB Scherer and Patrick Uretz were each awarded $1,000 as finalists for the award.

“We are grateful to Jim Whisenand and Equus & Co. for supporting our cause toward growing the sport that we all hold so dearly,” said Charles Smith, chair of the USPA Polo Development committee. “Mason’s outstanding leadership and volunteerism truly serve as a beacon for all younger polo players. The future of polo is promising, and all three of our finalists are incredible role models for how the game should be played and lived.” 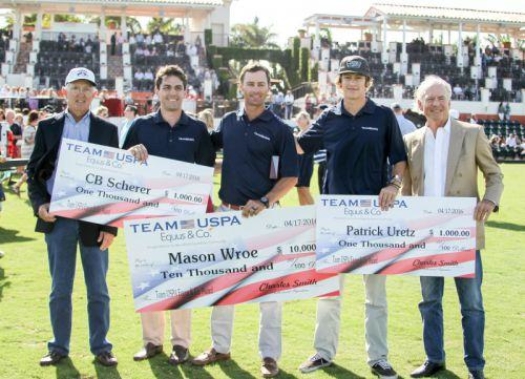 As a 4-goaler, Wroe has played on winning teams in the Herbie Pennell Cup, the Joe Barry Memorial, the Ylvisaker Cup and the Iglehart Cup. Throughout his career, he has coached and played in numerous Young Player Outreach Clinics hosted by Polo Development LLC, playing with countless younger players and sharing his knowledge, professionalism and horsemanship. Originally from Cat Springs, Texas, he attended Texas A&M University, where he captured the 2007 Men’s National Intercollegiate Championship and was named the Male Intercollegiate Player of the Year.

“As supporters of Team USPA and fans of the game of polo, we are proud to present Mason with the 2016 Team USPA and Equus & Co. Award,” said Jim Whisenand, chairman and CEO of Equus & Co. “We feel that all three Team USPA finalists represent everyone from all levels of polo, making that particular program so important to the growth of the sport.”

Award finalist and Team USPA member Scherer is currently 2-goals outdoors and 4-goals indoors. While attending the University of Virginia, he won three National Intercollegiate Championships (2009, 2011, 2012), and currently sits on the Board of Directors for the Virginia Polo Center’s program. After graduating in 2012, Scherer moved to Boston, Massachusetts, where he is currently working on his career in real-estate investment. In his spare time, Scherer umpires, coaches and hosts clinics for clubs throughout the Northeast, including Harvard Polo Club, Brown University and Myopia Polo Club. 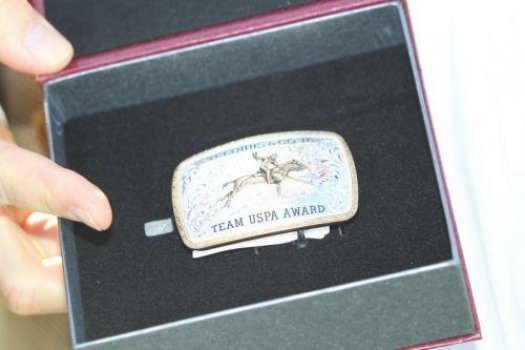 A Malibu native, Uretz attended Westmont College where he captured back-to-back National Intercollegiate Championships (2013, 2014), as well as the 2014 Polo Training Foundation Male Intercollegiate Player of the Year award. Since graduating, he continues to give back to the intercollegiate and interscholastic polo communities as an umpire and coach for the Santa Barbara Polo School, the Eldorado Interscholastic Team and his alma mater. An accomplished 4-goaler, Uretz was also a member of United States team that placed second in the 2015 Federation of International Polo World Championship in Santiago, Chile.

Team USPA is a Polo Development, LLC program geared toward cultivating the next generation of polo players and encouraging young professionals to develop their skills. The mission of the Team USPA Committee is to enhance and grow the sport of polo in the United States by identifying young, talented American players and providing them with mentor and training opportunities.