“[As] the highest handicap on your team, your job is not to play more than your handicap, it’s making your teammates play higher than their handicap.”  – Jorge “Tolito” Fernandez Ocampo Jr.

Hosted at the brand new arena outside downtown Middleburg, Virginia, on Saturday, October 2, Hotels At Sea and Core Real Estate delivered a captivating final of high-stakes fall polo, as Hotels At Sea successfully delivered on their recent arena dominance, capturing the United States Arena Handicap® 18-14. In total a whopping $40,000 in total prize money was awarded; $10,000 for second place, followed by $7,000 for third and $3,000 for the fourth place team as part of the USPA Prize Money Match Program. 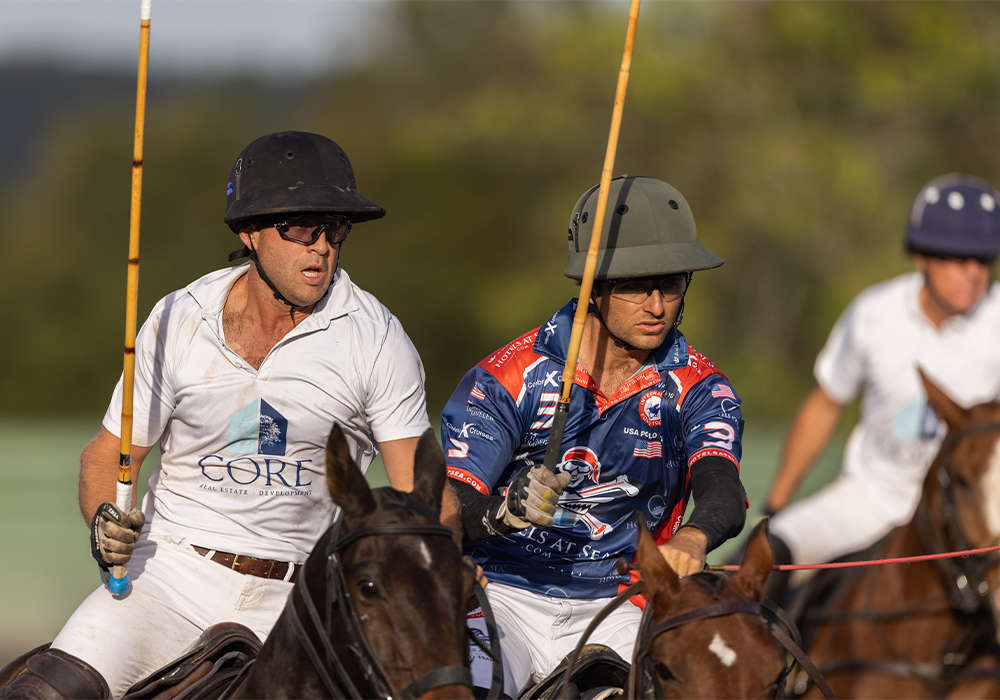 Starting with two goals on handicap, Gobin extended the scoring to three in the beginning of the first for Core Real Estate, followed by a quick response from Hotels At Sea’s Ocampo Jr. As each team tried to establish their early strategies, arena newcomer Baldwin shone in the first, scoring a two-point goal for Core Real Estate in his first arena tournament. Baldwin who has a background in lacrosse and extreme sports relished the challenge of arena polo, “[There’s] faster transitions than in the grass, the strategy [is] way different, working the angles and the boards.” Continuing the momentum from the beginning of the chukker, John Gobin added another goal, giving Core Real Estate a 7-4 lead at the end of the first.

Despite trailing early, Hotels At Sea were confident in their team chemistry and ability to communicate. Competing together as a team for three years, Tareq Salahi shared, “we know how to switch strategy and sometimes we do it in the middle of a chukker.” It was this familiarity that led to Salahi’s successful two-goal second chukker. Ocampo Jr. shared the importance of releasing the ball quickly, “the idea was to find a position for [Tareq], where to be when Marcos [Bignoli] and I hit the ball.” Playing unified was important for Tolito, “[as] the highest handicap on your team, your job is not to play more than your handicap, it’s making your teammates play higher than their handicap.” The ability to adjust mid-chukker and utilize quick passing allowed Bignoli, with his own two-pointer, and Ocampo Jr. to join Salahi on the scoreboard in the third chukker, as Hotels At Sea moved full steam ahead 12-9 at halftime.

Not to be deterred by their three-goal deficit, Core Real Estate’s Harlow, substituting in the final for Connor Deal, posted two goals in the third chukker, including a successful penalty conversion. Ultimately, the third chukker would belong to Hotels At Sea, as Bignoli and Ocampo Jr. continued their offensive onslaught and accurate shooting, adding a combined four goals to take their team into the final chukker with a five-goal lead.

With the fourth chukker underway, Core Real Estate began the push for a final comeback opportunity. Gobin was able to hit the goal mouth first for Core Real Estate and Hotels At Sea knew with Gobin as competition there was no space to relax. Playing with Hotels At Sea in previous renditions of the team, Salahi was cautiously aware and appreciative of Gobin’s talents, “he knows my strengths and weaknesses, where I’m not going to be strong and ready. He comes to those areas, so we had to switch it up. Hotels At Sea’s strategic execution and healthy respect for their opponents allowed them to hold Core Real Estate to just two goals from Harlow and Baldwin. Bignoli and Ocampo Jr. capped-off their tournament with an additional goal each in the final chukker, as Hotels At Sea sailed to the 18-14 United States Arena Handicap® championship title. 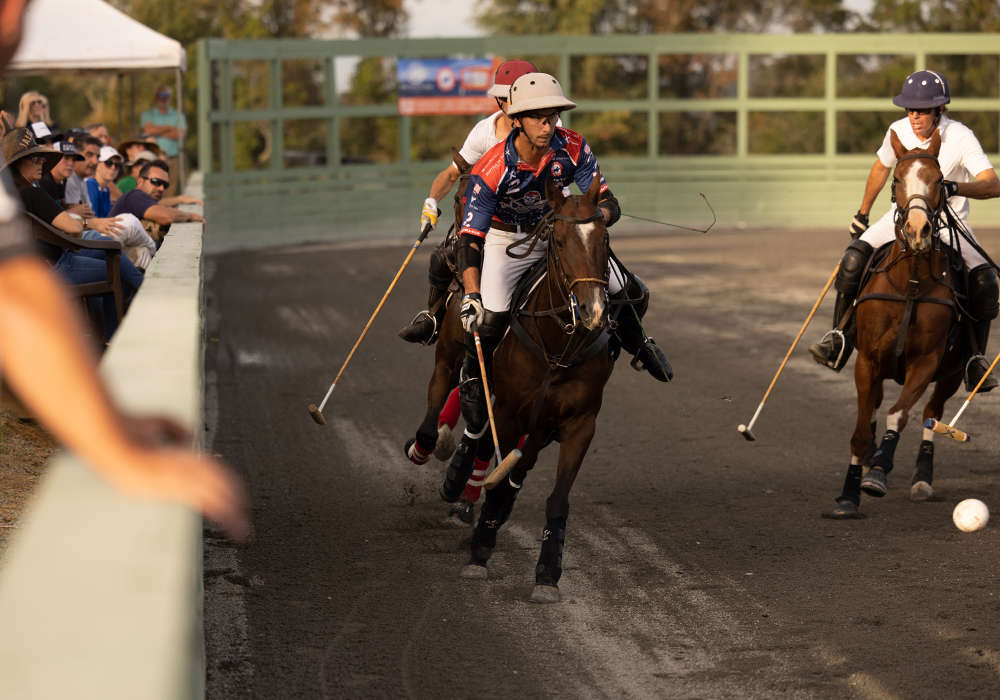 Jorge Fernandez Ocampo Jr. was named Most Valuable Player, finishing the day with an impressive nine goals and five assists, despite competing in only his fifth lifetime arena match. An elated Ocampo Jr. reflected on his new journey into arena polo as differing from his experiences in Argentina, “we arrive here [in the United States] and I’m a six-goal [handicap] and I’m going against someone who is a one-goaler, but he’s smart because he knows indoor polo. I don’t know this sport and it’s hard to play, but it’s good because every [type of] polo you play, makes you think and teaches you a lot.” Still learning and growing in his polo career and the American arena polo system in particular, Ocampo Jr. is thoroughly enjoying the opportunity to challenge himself in prestigious tournaments such as the United States Arena Handicap®, expressing, “I want to be open; I want to play any polo.” 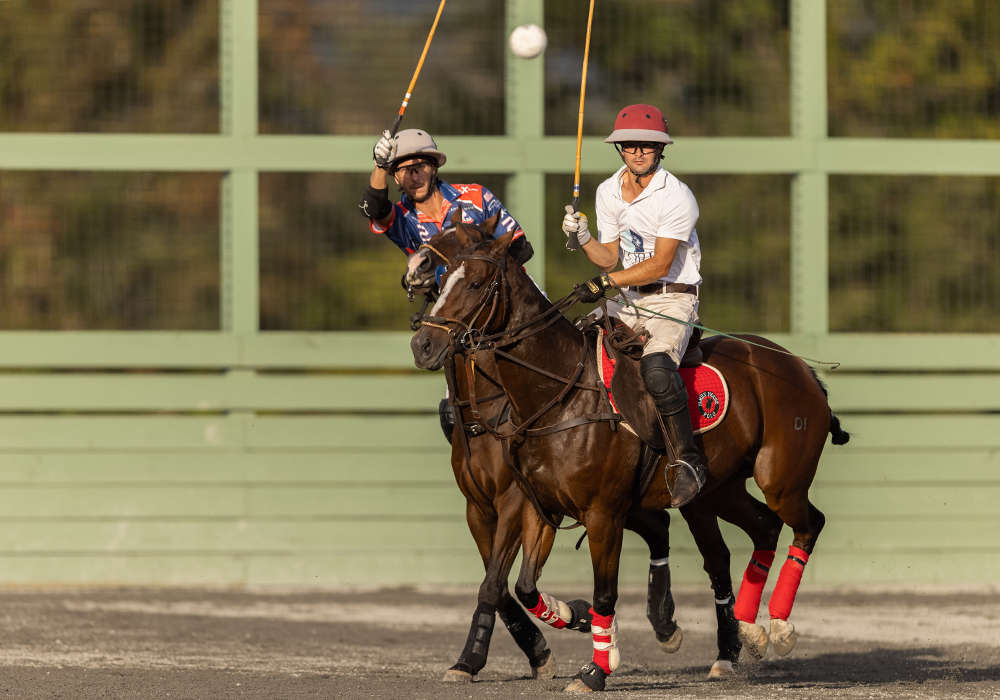 Best Playing Pony honors were presented to Chrome, a fiery 15-year-old American thoroughbred chestnut mare played and owned by John Gobin in the second and fourth chukkers. “I bought her from Justin Pimsner seven years ago,” Gobin said. “She is very athletic and fast, so she makes for a perfect polo pony. She has a little crazy chestnut in her though because you can only get on her if you are in the arena or on the field, otherwise she rears and brings you back to the trailer! Her craziness is worth putting up with once you start playing though because you feel like you can get to any ball or out run anyone on the field.” 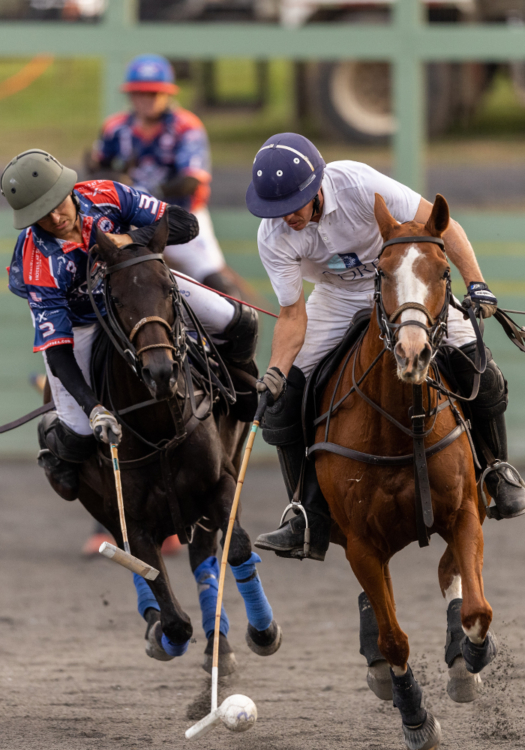 Overjoyed by the victory, Tareq Salahi took the time to recognize the fans in attendance contributing to an electric finals atmosphere, “it’s great to see [them] here. It really drives us to play stronger and more aggressive polo.” In addition to claiming the title of United States Arena Handicap®champions, Hotels At Sea also received the $20,000 grand prize check. When asked what Marcos Bignoli was going to do with his share, his answer was practical yet poignant, “build more fences on my farm.” 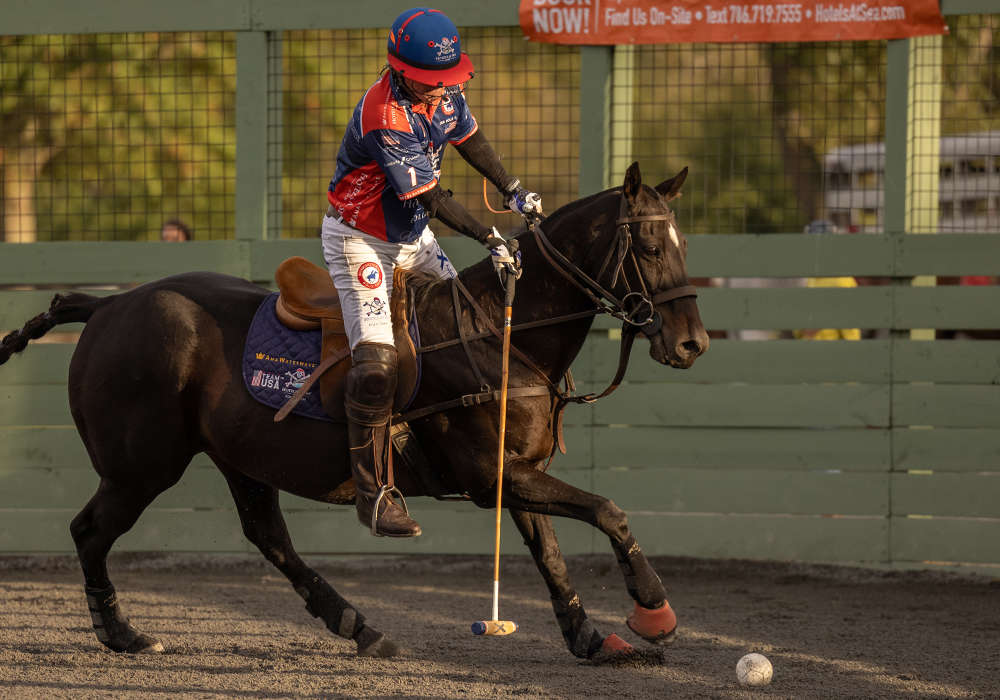 Hotels At Sea's Tareq Salahi turns the ball along the boards.

Hotels At Sea will now set their sights on fielding a team for the 2022 U.S. Open Arena Polo Championship® to be held at Twilight Polo Club next year. The challenge to assemble a competitive team is one that Bignoli embraces, “[Tareq] says next year he wants to do the U.S. Arena Open, so we’ll see.” 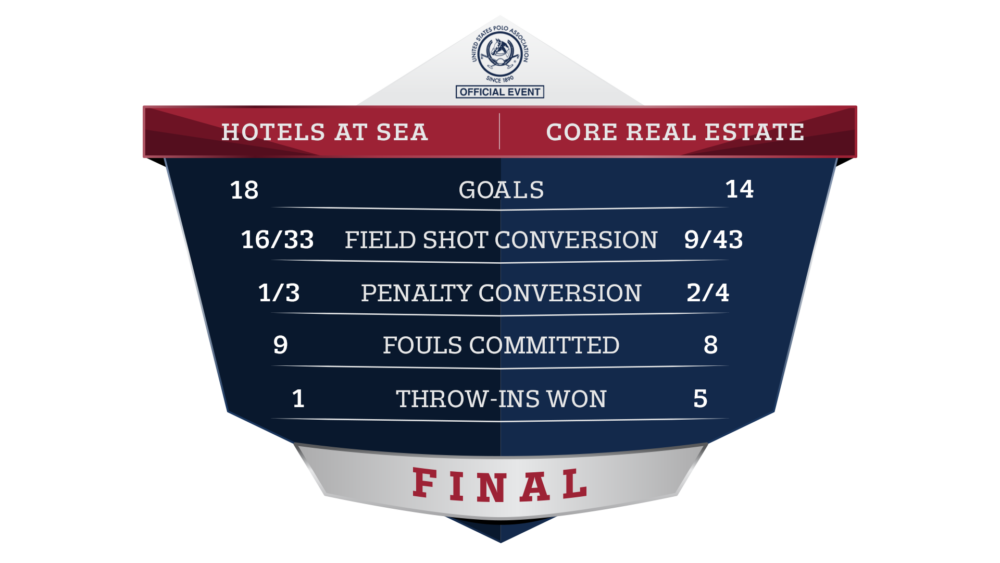 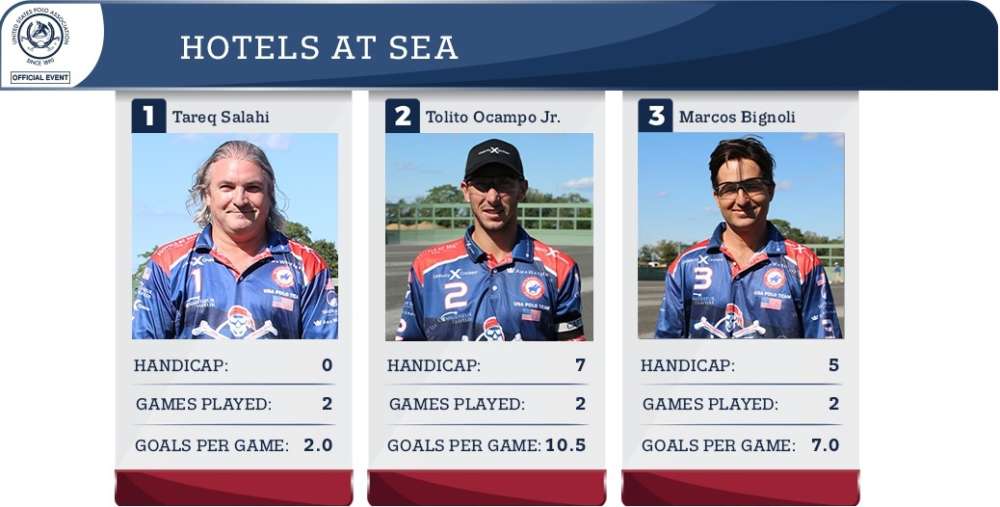 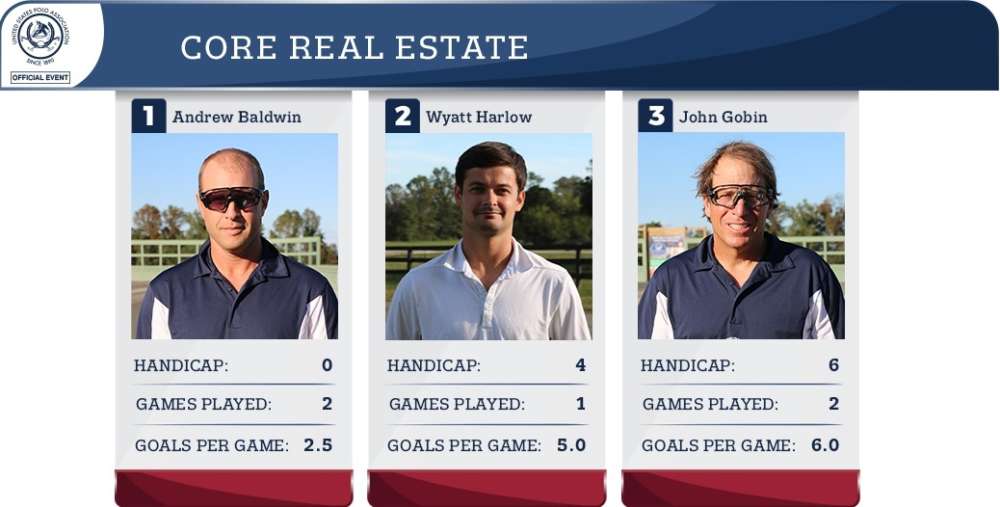 *Connor Deal and Wyatt Harlow are Team USPA Alumni. Team USPA is a USPA program designed to enhance and grow the sport of polo in the United States by identifying young, talented American players and providing mentored training and playing opportunities leading to a pool of higher rated amateur and pro players and the resultant giveback to the sport of polo.

All photos courtesy of ©Tony Gibson