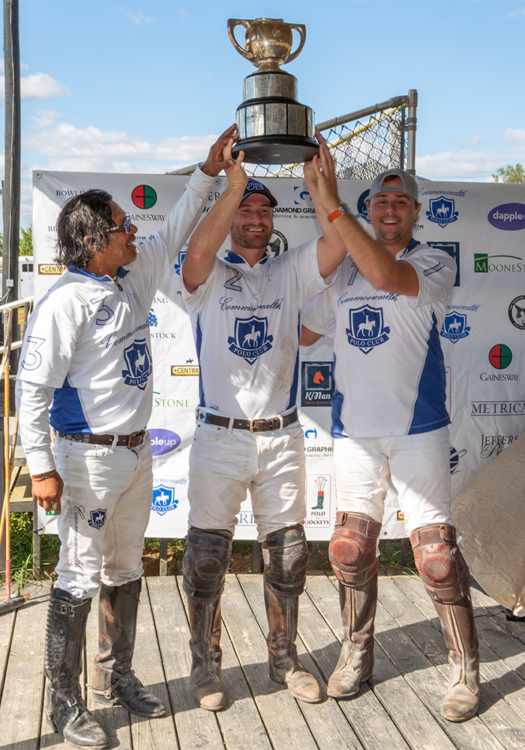 Assembling Commonwealth Polo with friends and former college teammates, Vasquez spoke to their team chemistry, “I’ve been coaching Nik since he was a teenager here in Kentucky, and I’ve been friends with Justin since he was at college at Cornell, and he spent last summer here. When the opportunity presented itself to play together, the team fit perfectly handicap wise and we jumped on it.” Schick continued, “I’ve known Nik for roughly 10 years, he and I played intercollegiate polo together at Cornell, where we’ve remained really close, if not best friends ever since. Playing in this tournament was really fun because it allowed us to relive our college [polo] experience.” 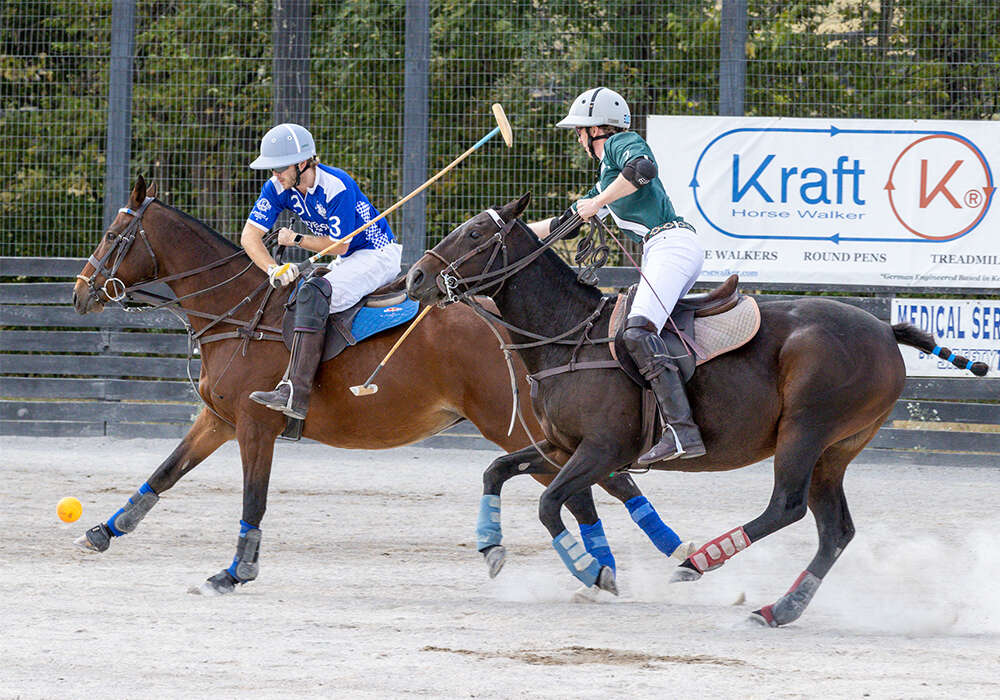 UK Polo's Will Green on a nearside run with Three Trees' Ben Lynch in defense.

Kicking-off Friday’s action UK Polo was off to a quick start against Three Trees, where five goals from Puyana ended UK Polo’s first match of the day with an 8-3 lead. Facing Commonwealth Polo, UK Polo was awarded a three-goal handicap, but a dominant start from Feldman and Vasquez highlighted by three two-pointers for a combined 10 goals, placed Commonwealth Polo ahead at the half 11-5. Following up on their first dominant performance of the day, Commonwealth Polo was back in action against Three Trees, building on their offensive rhythm with all three players contributing to the score once again. A two-goal handicap for Three Trees and seven-goal performance from Carnegie and Boland ended the second chukker 9-6 in favor of Three Trees. 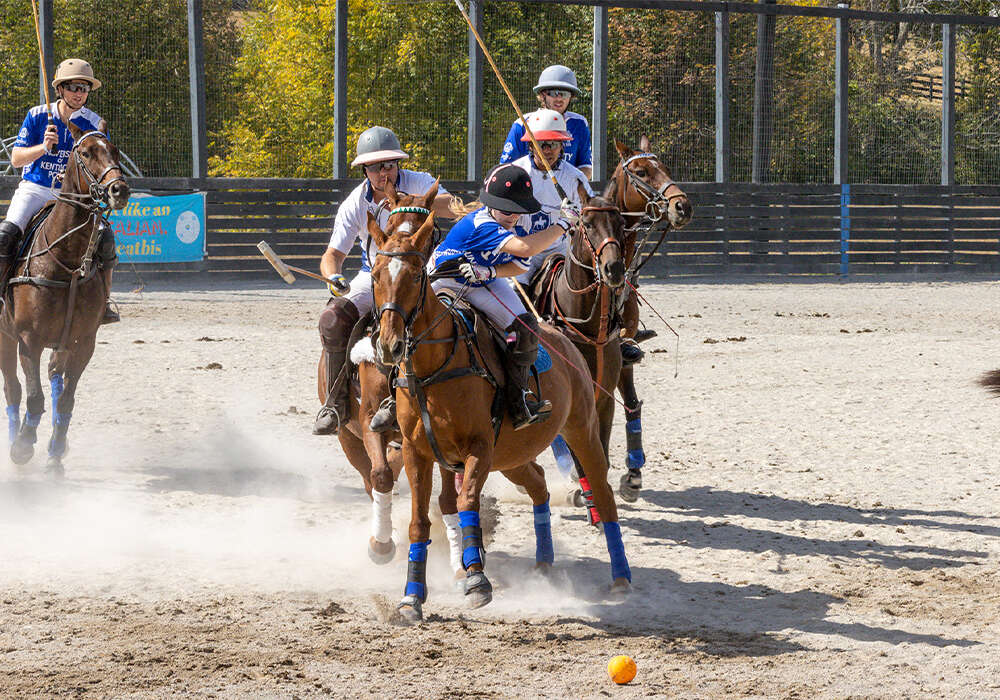 Carrying over scores from Friday, Sunday’s play began with UK and Three Trees. Beginning with a five-goal deficit and despite a valiant second-day effort and comeback from Three Trees outscoring their opponents, UK Polo’s initial lead kept them alive, taking the win 11-7. Leading the competition with seventeen combined goals in the tournament, Commonwealth Polo’s commanding offensive performance was followed by just three more, but their previous lead against UK Polo would ultimately stand for the 14-11 victory.

“All the teams were well rounded and with players that know how to play in the arena [with] the aggressiveness, speed, strategy, and horsemanship needed.”  – Nik Feldman

Reflecting on the competition following their win against UK Polo, Feldman noted, “all the teams were well rounded and with players that know how to play in the arena [with] the aggressiveness, speed, strategy, and horsemanship needed. UK [Polo] was an excellent team, Caroline impressed me a lot and I really look forward to coaching her, and Federico was like [Lionel] Messi with the ball—a little magician.” Schick continued, “UK Polo is a young, hungry team and they’re really fast. It was difficult playing against a much younger team given they have the age advantage, but overall, they played extremely well.” 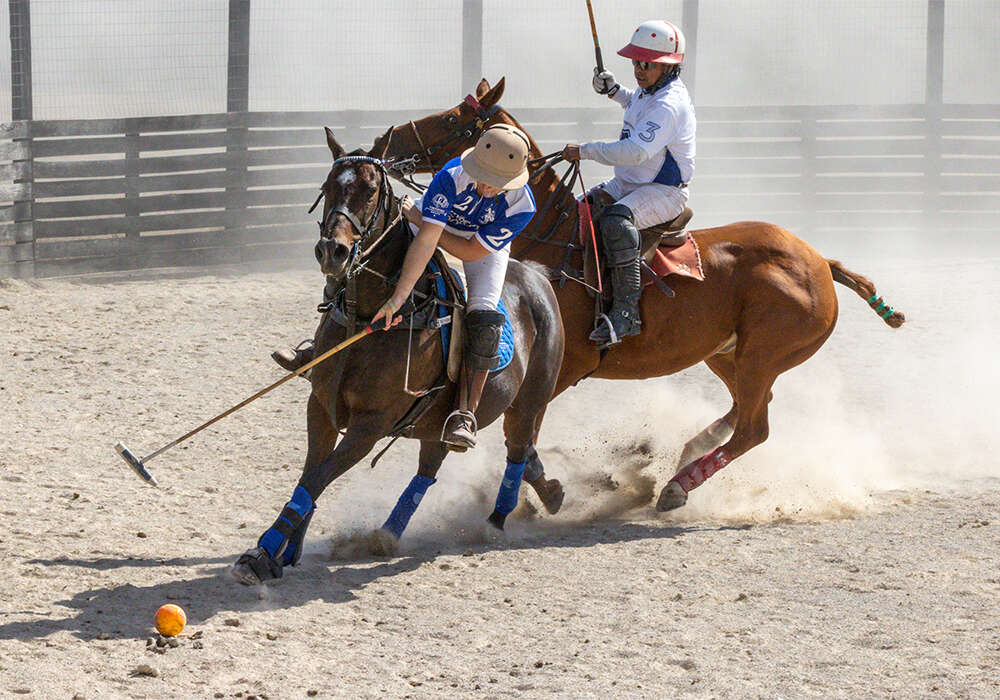 With the title within reach, Commonwealth Polo sought to erase their three-goal deficit against Three Trees. “Three Trees always wears me down,” said Feldman, “Will Boland never gives up a play and pressures defensively on everything. Joaquin and Ben are excellent arena players, even more so as horsemen. I can’t wait to see what Joaquin will become in polo, he’s dedicated, hardworking and a number one prospect in my opinion. Ben is always a pleasure to play against, he’s an incredibly disciplined, focused player, and I knew he was going to challenge me.”

Speaking to the grind of round-robin competition, Feldman added, “arena polo always makes you sore and you’ve got to chase every play. As all polo players know very well, it’s the second day after your game your muscles ache, not the first, so Sunday’s games were especially exhausting.” Adjusting their strategy for the remaining two chukkers, Schick shared, “they put me at number one, and it just really clicked for us on Sunday, and we were able to dominate the game because we were winning basically every throw-in.” 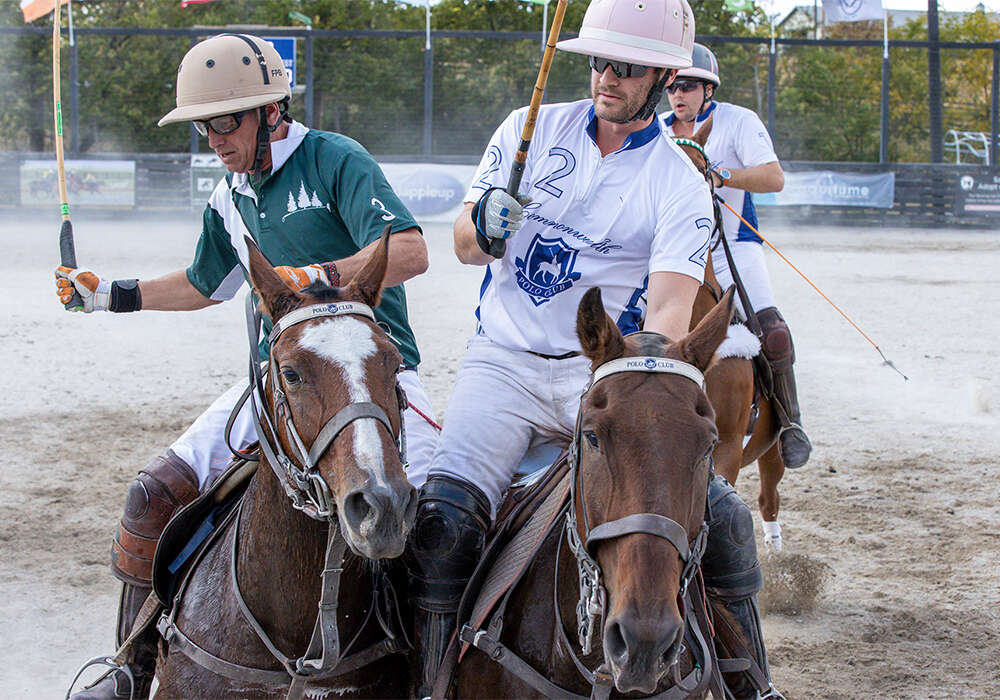 A complete team effort from Commonwealth Polo saw Feldman find the goal mouth for another four-goals, as a two-point contribution from Schick and another goal from Vasquez ultimately withstood a late two-point push from Three Trees’ Carnegie to seal the 13-12 win.

Celebrating his third consecutive National Arena Delegate’s Cup title, Feldman expressed, “this win means a lot to me. I was able to do it with my best friends Jorge and Justin. Jorge always has and always will be on my dream team. He brought me up in Lexington since I was 13 and made me the player I am today along with the Wells family. Jorge is also the most clutch player; he always scores when he needs to, and he does it all while smiling!” Vasquez added, “to win two years in a row means a lot, it’s always great to win a national tournament, there’s not many national arena tournaments out there, it’s a great accomplishment.” 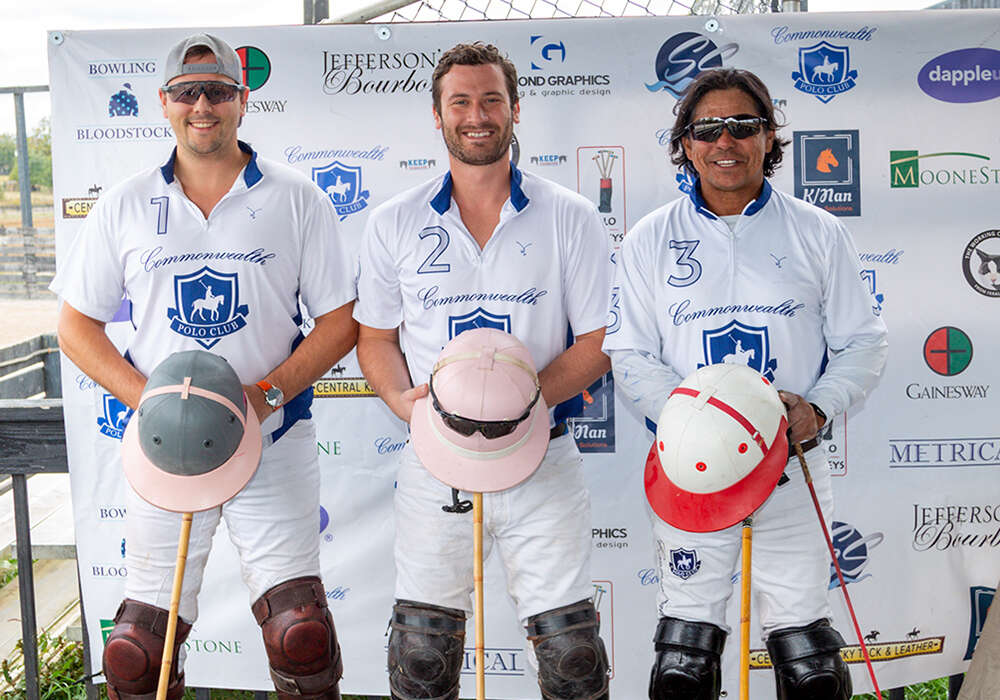 UK Polo’s Will Green was presented with Most Valuable Player, “he was solid and the backbone of their team,” noted Vasquez, “he was good at being in the right spot, did a good job of communicating and kept his team fighting.” “Will was solid as a rock,” added Feldman, “he was quick-thinking and handled the horses like a pro.”

Mariposa, a 14-year-old Argentine mare played by Nik Feldman and owned by Commonwealth Polo was named Best Playing Pony. “I played her the first and third chukkers on Friday, and the second and fourth on Sunday,” said Feldman, “this is my first time playing her and she impressed everyone. She has all the classic traits of a small, nimble pony—quick at turning and will shove herself under the shoulder of the other horses to win every bump. She’s like a well-tuned roadster Miata!”

“I’ve known Nik for roughly 10 years, he and I played intercollegiate polo together at Cornell, where we’ve remained really close, if not best friends ever since. Playing in this tournament was really fun because it allowed us to relive our college [polo] experience.”  – Justin Schick

Recently re-introduced to the sport Justin Schick received the Sportsmanship Award. “After college I had to start my career and strayed away from polo, but fortunately these years since COVID, I’ve been able to be more involved and it’s been a real testament to my appreciation of and longevity in the sport,” said Schick. Sharing Schick’s strength as a teammate Vasquez stated, “Justin’s a great guy, he loves the sport and he’s got that sportsmanship thing about him—he’s easy going, friendly, helpful and always wants to lend a hand to people, and I think that shows on the field.”

Reflecting on the victory, Schick continued, “I never imagined being able to participate in a 9-goal tournament, this is very high-level polo that I could’ve only dreamed of when I graduated college. To come back and participate was truly a dream come true for me and something that I hope to participate in again the future!”

All photos courtesy of ©Kevin Cosgriff.