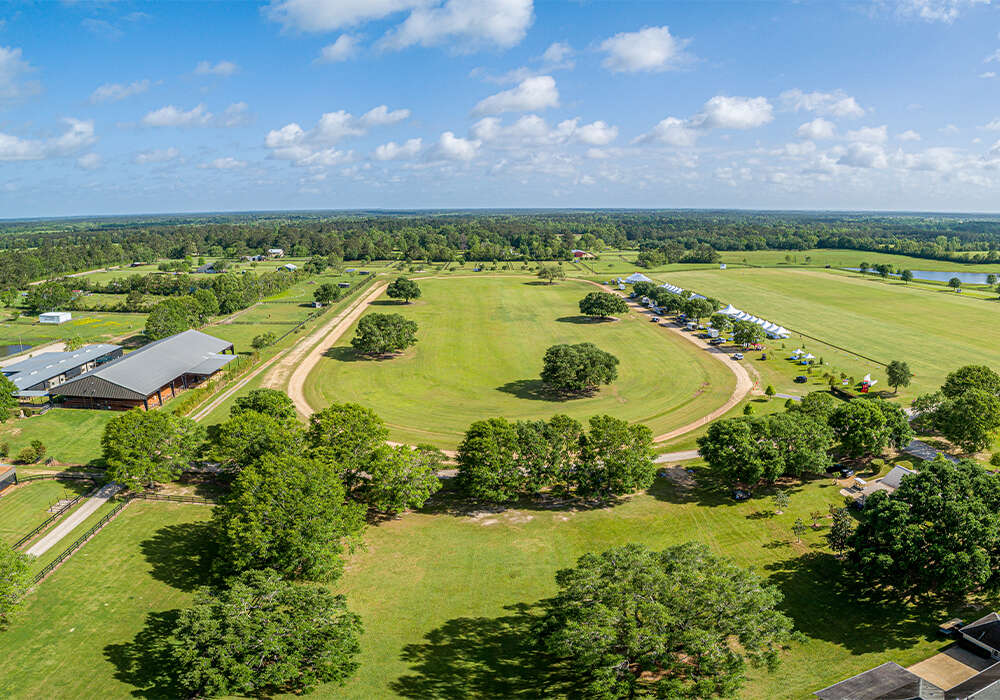 Tucked away in the scenic Northwest St. Tammany Parish, the New Orleans Polo Club (NOPC) is spread across several locations in the quaint Folsom, Louisiana area. Now home to three regulation tournament fields and three practice fields across four different member-owned farms within a five-mile radius, NOPC has created a tight-knit, yet welcoming community of polo enthusiasts. In the wake of their efforts to upgrade NOPC’s fields and facilities, the club’s main focus has shifted to membership growth, now hoping to raise awareness of their club and the opportunities they offer to beginners to learn polo as well as to seasoned players to come join them in playing competitive polo.

“Come visit us, come play with us, come do something with us…stay at our farms and play some 4-goal or 6-goal polo!”  – NOPC Club President Dr. Sebastian Koga

A southern horse haven, New Orleans has long been known to be a hub for various equestrian disciplines such as racing, dressage and eventing. But despite its bustling horse scene, many people are still not aware of the polo presence in the state.

NOPC is the sole polo club in Louisiana. The club features competitive 0- to 2-goal polo as well as 4- to 6-goal polo. This past spring, NOPC held two USPA tournaments at the 2-goal level with the Mardi Gras Cup and the Southeastern Circuit Governor’s Cup. They plan to hold three more USPA tournaments this fall. Outside of this, Club Manager Doug Parsons described more of the action that goes on at the club, sharing, “We do several club tournaments, we have a senior’s tournament [and] just some kind of low-key stuff we put together to keep it interesting.” 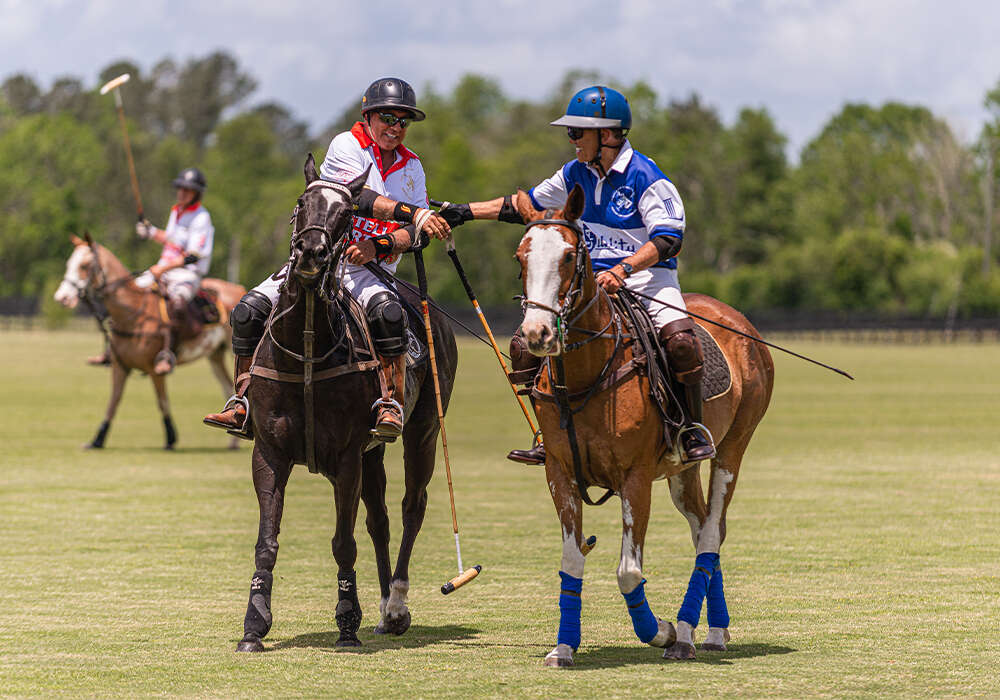 Intended to elevate the level of play at the club and help bring more interested New Orleanians into the sport, NOPC currently has two professionals. Segundo Ortiz, one of the club professionals, has an arena where he teaches beginners in Folsom. The other club professional, Sebastian Bonorino, along with sponsor Granville Semmes, have a stick-and-ball field where they help beginners pick up polo year-round.

A main priority for the Louisiana club, NOPC Club President Dr. Sebastian Koga explained how beginners can get involved and the importance of their involvement, sharing, "We have a league called the Champagne League which has discounted fees. Beginners are put in slow chukkers with a professional mentor on each team, playing specifically to learn the rules and safety and become better riders. The Champagne League is kind of our gateway to cultivate new players." He continued, "We'd like to have more beginners, more grassroots interest. More equestrians who are maybe in jumping or are in other equestrian sports try polo because we live in a prime equestrian area." Fennelly added, “We try to make sure that everybody feels that they can come learn, participate, take lessons [and] invest in their interest.”

“We'd like to have more beginners, more grassroots interest. More equestrians who are maybe in jumping or are in other equestrian sports try polo because we live in a prime equestrian area.”  – NOPC Club President Dr. Sebastian Koga

To help guide beginners and expedite the learning process, NOPC has even hired a full-time umpire in 4-goaler Marcos Bignoli. Koga enthusiastically shared, “Having an umpire at every game and every practice really has improved the discipline and the quality of play.” A perfect segue into more advanced polo, joining the Champagne League has helped many players at NOPC graduate from slow chukkers to tournament-level play. 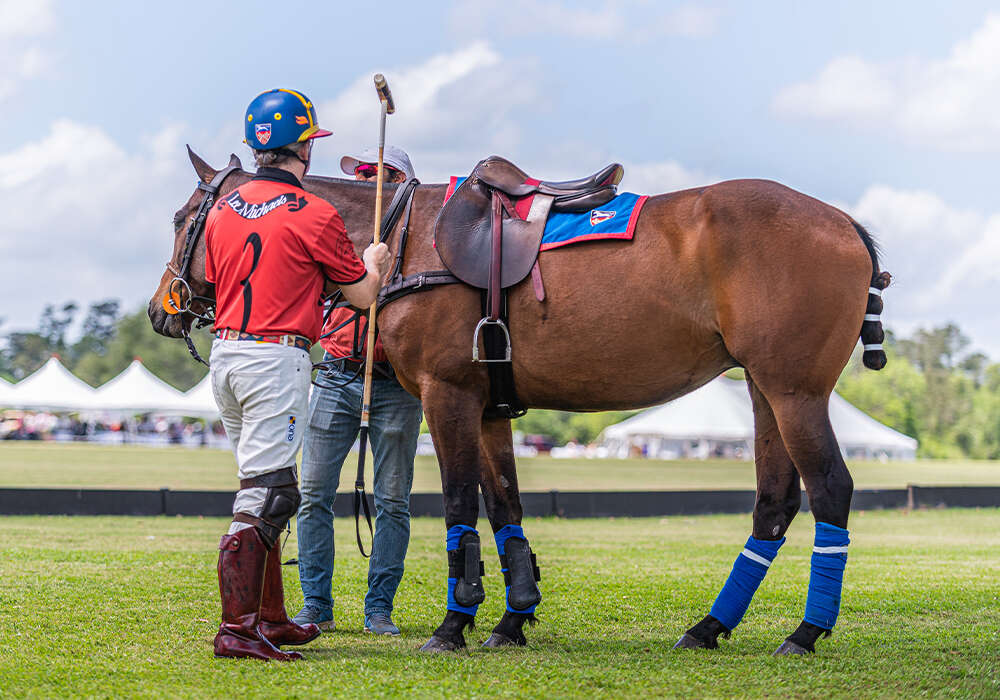 A fun-filled day of polo for a good cause, the Harvest Cup typically draws in around 2,000 spectators. ©Geaux Media

Dedicated to giving back to their community, NOPC also makes special efforts to host polo tournaments in support of charitable causes. For instance, the annual Harvest Cup Polo Classic, organized by the Junior League of Greater Covington, is a fundraiser aimed at raising money in support of the Junior League and its extensive variety of community programs. The event usually draws around 2,000 spectators and, over the 27 years it has existed, has raised over $840,000. NOPC also hosts the Southern Hotel Cup which benefits the Covington Public Art Fund, the New Heights Cup sponsored by New Heights Therapeutic Riding Center and the Justin Addison Memorial Conservation Cup sponsored by the Land Trust for Louisiana. 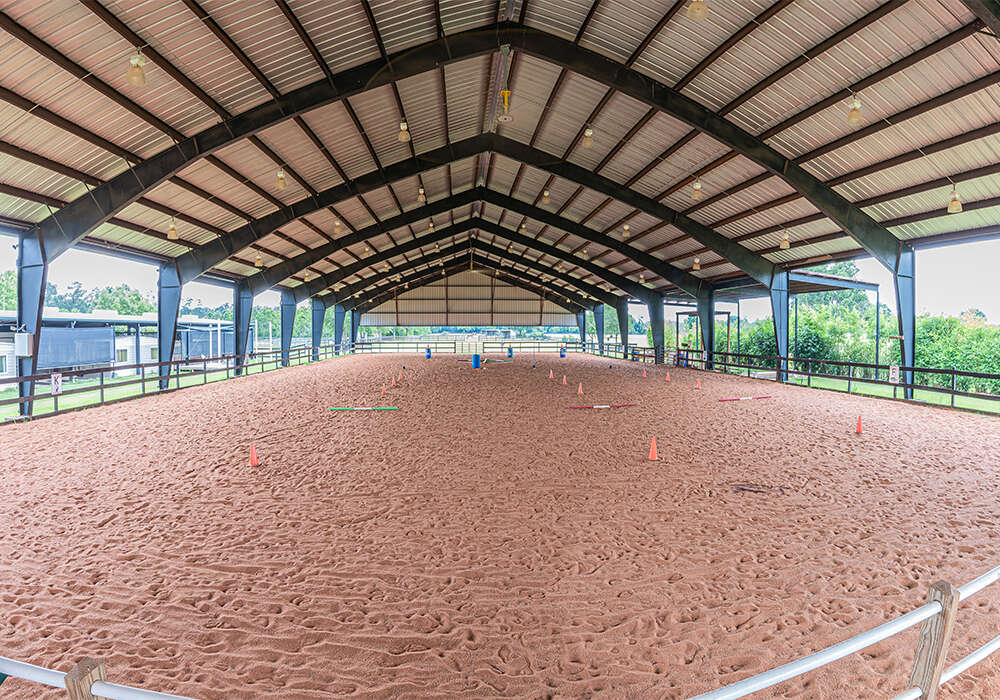 “My partner and I are owners of the property and we donated a piece. So, when you come through the gates of the New Orleans Polo Club, anybody who has a desire to ride a horse and participate in equine activities and could benefit from them is welcome.” Fennelly also leases one of his retired polo ponies, Malibu, to the New Heights program to be used in equine therapy. 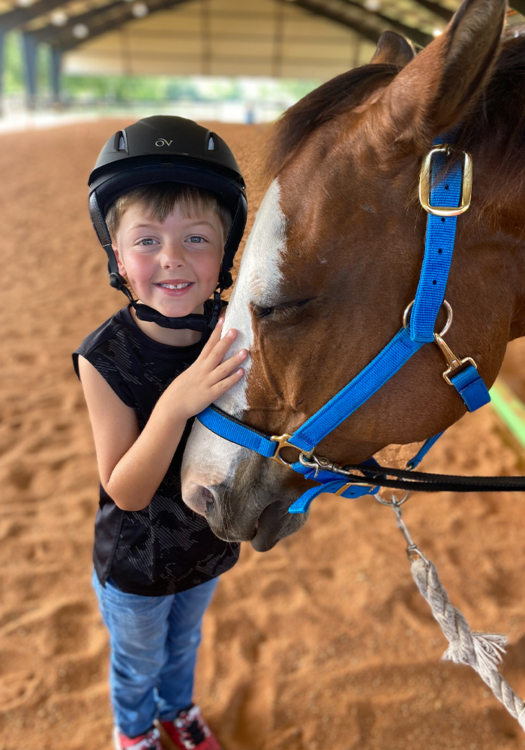 As far as club visitors, NOPC’s location makes it the perfect rest stop along the route that many players take from Florida to Texas or California. Equally invested in raising the level of play at the club, Koga extends a warm welcome to those players passing through, saying, Come visit us, come play with us, come do something with us…stay at our farms and play some 4-goal or 6-goal polo! Just an hour outside of New Orleans, NOPC visitors have the luxury of playing polo by day and experiencing the vibrant city by night. Also conveniently immersed in the world of horse racing, visitors could even find their next polo prospect at one of the several racetracks nearby.

A jack-of-all-trades, NOPC member Lori Summers has competed in the Thoroughbred Makeover Challenge multiple times in the polo division as well as the trail division with gems she found off-the-track in Louisiana. An experience she highly recommends, Summers beamed, “It promotes the sport. All the people there that are non-polo, they all want to watch the arena chukker, they all talk about it. They want to try it.” Summers has also travelled the world playing polo and even has a house in Argentina, where she goes to play in NOPC’s off-seasons. Upon her semi-annual returns to NOPC, she always brings new experiences and insights to share with her community, as do many of the other members who travel in hopes of bringing something new back to the club. 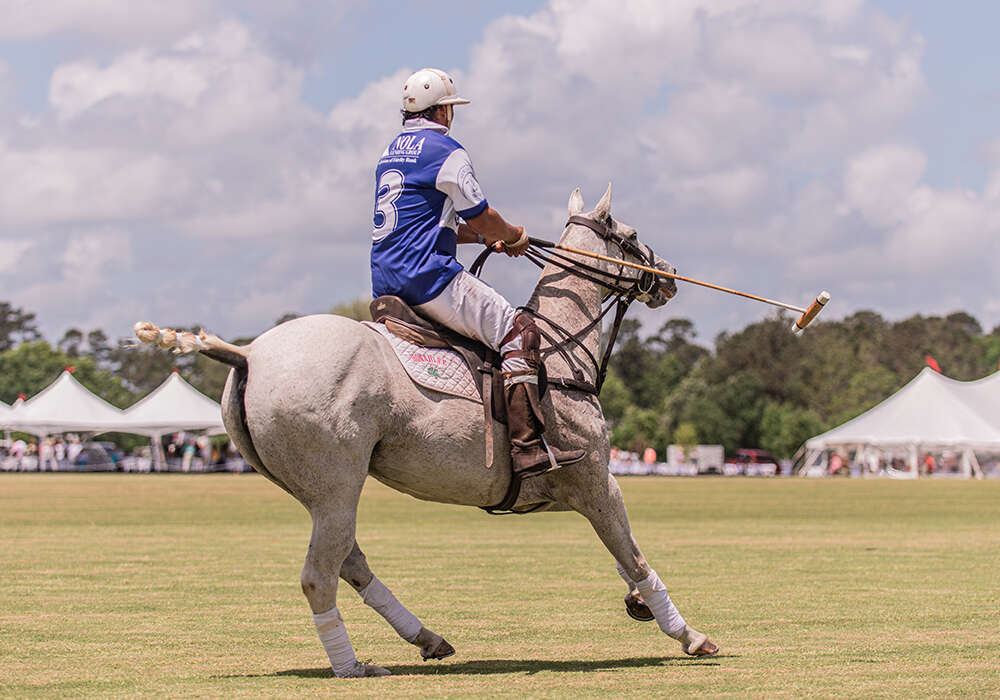 NOPC’s location makes it the perfect rest stop along the route that many players take from Florida to Texas or California. ©Geaux Media

A UC Davis and intercollegiate polo alum, another goal for Koga is to “create some level of interest with the local colleges in New Orleans.” He added, “With Tulane and Louisiana State University both within an hour of NOPC, there is a lot of opportunity for intercollegiate polo in the state…that was my path to polo, so I feel like arena polo for young people has a huge gateway role.” NOPC encourages students at nearby universities interested in starting an intercollegiate program to reach out to them or the USPA.

“There is polo here and we have massive infrastructure and guest houses...we have the facilities of a much higher-rated club.”  – NOPC Club President Dr. Sebastian Koga

The total package, NOPC offers something for everyone, whether you’re a beginner or a lifelong player. And with fall season quickly approaching, there is a lot of opportunity for outsiders to come visit. Ecstatic to have new players join the fun, Koga emphasized, “We want to raise awareness that there is polo here and we have massive infrastructure and guest houses...we have the facilities of a much higher-rated club. We'd like to see a player from New York or Florida come down in their off season and play with us for a month [or] two, or for a week.”

So, whether the French Quarter or the polo field is calling you to New Orleans, make sure to stop in to see the players, polo and ponies at NOPC.