POLITO PIERES RETURNS TO ENGLAND WITH UAE - AN ARTICLE BY CLICKPOLOUSA 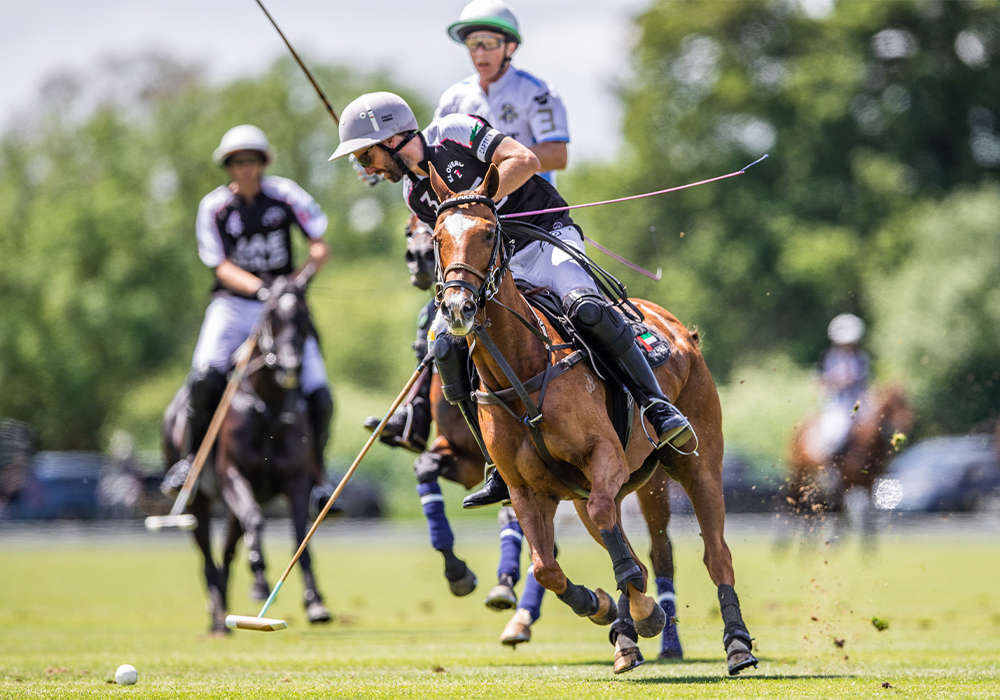 UAE's Polito Pieres on the ball in the Cartier Queen's Cup. ©The Art of Polo/CLICKPOLOUSA

Following a strong GAUNTLET OF POLO® season with La Indiana who reached the semifinals of all three tournaments, Polito Pieres headed to England to compete in the 2021 Cartier Queen’s Cup with UAE (Catalina Lavinia, Tomás Panelo, Polito Pieres, Tommy Beresford), an organization which he has played for in past years. "I played for UAE in 2018, when Lucas [Monteverde] was injured,” Pieres said. “I knew Lucas' group from Alegria, back from 2013. It’s nice to get together with the Monteverde family again. I’m very happy that they’ve invited me to be a part of it again and I'm making the best of this opportunity."

Competing against 14 teams for the distinguished trophy, the level of play is high. "Anyone could always win in any given year, and this one is particularly tough,” Pieres continued. “All the teams are great and with it being so competitive it’s great motivation. Tough, but fun."

Born in the United States, Polito Pieres enjoys competing in England but prefers to be home in Florida. "I do prefer the Florida season, as I have a home in Wellington, Florida, and everything is closer over there," Pieres said. "However, we have a great, friendly group here in England. There are two UAE teams, UAE and UAE II, and there are a ton of fun people so I'm enjoying it a lot." Global Polo TV is offering all current subscribers access to watch the 2021 Cartier Queen’s Cup live on globalpolo.com through Sunday, June 27. To receive a special discount offer please email info@globalpolo.com.

Sitting down for a candid interview with CLICKPOLO, Pieres talked about La Natividad’s performance last year in Argentina and discussed what changes have been made for the upcoming Argentine season. 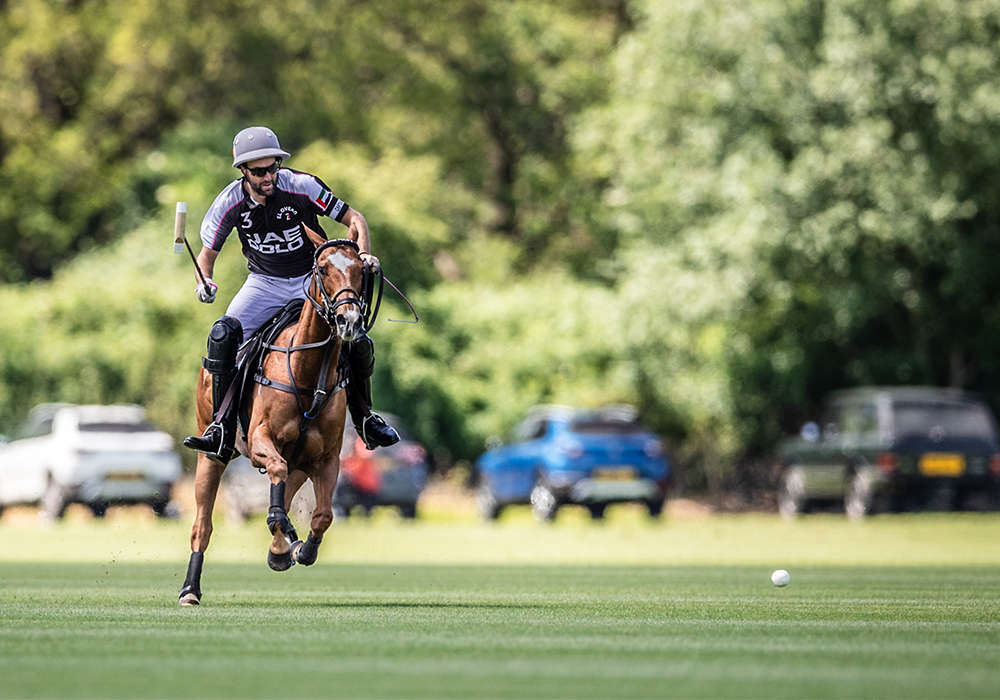 UAE's Polito Pieres leads one of two UAE teams in the Cartier Queen's Cup. ©The Art of Polo/CLICKPOLOUSA

How did you feel about La Natividad's 2020 season in Argentina?

"It was positive - it was our first year and we weren't as prepared as we should have been when it came to horses, which I think was the biggest problem. Our goal was to beat Murus Sanctus at Palermo, and we did. We also had a bad day against La Dolfina. They had lost a game that they shouldn't have and so they knew they couldn't afford to mess around."

How was it playing with Jeta Castagnola on the same team since you both are very used to playing number one?

"The key was the horses. When it comes to positions, against Murus Sanctus I was number one and Jeta was number two and it went great. He scored a lot of goals and I had a good performance. The positions weren't as strong, but both of us did good that day, not to mention our teammates Barto [Castagnola] and Nachi [Du Plessis]."

You keep talking about horses, what will happen in the 2021 season?

"We talked about it in Wellington [Florida]. We are buying whichever horses we want and we're going to do better. People are helping us too by giving us horses, and I think that as a team we'll all be better in that regard this year.”

Did having high expectations work against you?

"Yeah, for sure. We had to be more realistic and accept that we didn't have the same horsepower as Ellerstina or La Dolfina. This time we'll be on an even playing field and I have great faith in us, like never before. 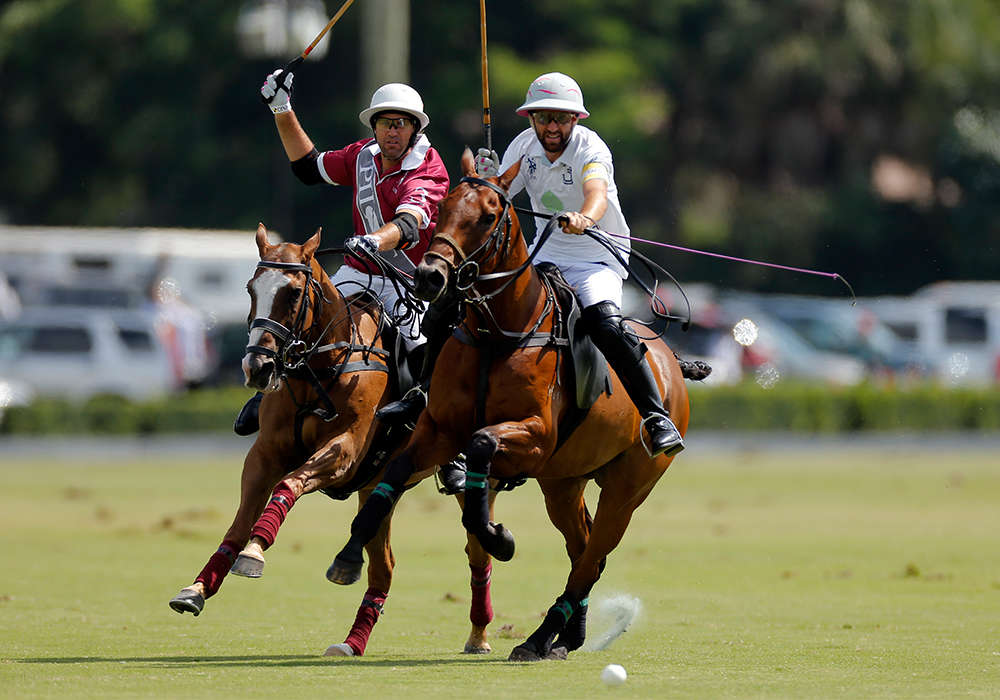 Polito Pieres and cousin Gonzalito Pieres battle for possession in the GAUNTLET OF POLO®. ©David Lominska

Will you be improving your string?

"I spend all my money on horses. Last year I made the biggest investment of my career and bought about 15 horses. It was a good year, I'm playing well in both Argentina and the United States now. Last year at Palermo I was happy to lend horses to my teammates Jeta and Barto [Castagnola], and Nachi [Du Plessis]. I'm not the most passionate horse breeder, but there is nothing better than having a good mare. I love playing a good mare, even if she isn't mine. I love spending my money on horses."

Have you ever had to choose between buying property or horses?

"It's hard to choose. Some people might choose the house as an investment. However, for me it's all about the horses. Last year I really wanted to purchase a ranch, but when I had the opportunity to buy 10 of Las Monjitas' horses, some from Los Machitos and a couple of American Thoroughbreds, I didn't doubt it for a second. For me the dream of winning at Palermo is bigger than anything else. I've been in a couple finals overseas and my goal is to win."

Tell us about your breeding.

"My breed is called Polilla and my dad and I are managing it together. We started it only a couple years ago. I have a stallion who played at Palermo. The best ones may only be four years old, when I started investing more heavily in the breeding because I had been spending most of my budget on playing horses.” 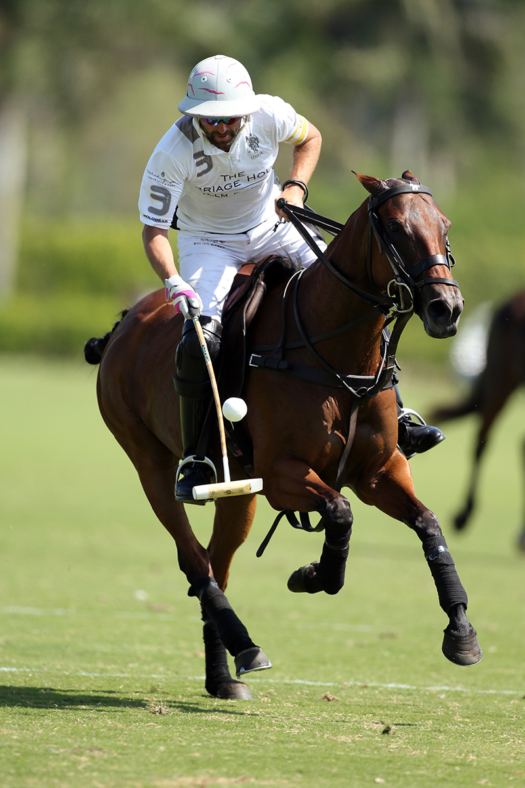 La Indiana's Polito Pieres taking the ball out of the air. ©David Lominska

You said you have great faith in your team, but it will be the most difficult year with four top teams.

"I'm optimistic. Working with former 10-goaler, Lolo [Castagnola], motivates you greatly, he's a very positive influence. We talked a lot during the Florida high-goal season and he called me before every match I played. That helps me get motivated. He pulls you into his mindset of going all in and being positive. I had one of my best seasons in Wellington this year, I hadn't done so well in years so I'm very excited!"

What did you think about the final last year between Ellerstina, your former team, and La Dolfina?

"When you watch from the sidelines of a polo game, you can see how much your family is suffering. In the semifinals between Ellerstina and La Dolfina II it was very bad and the same in the final.

They may be my former team, but they are still my cousins and I'd have been happy if they won. Of course, it would have been weird to leave and them win the Triple Crown the following year. It was an odd feeling, for sure."

So it was a bit of a relief that Ellerstina didn't win?

"I've been playing with them for a long time and I know firsthand how hard they work to win at Palermo. They are friends, some are family, and there are a lot of people working for Ellerstina whom I really appreciate. Hilario [Ulloa] was also my teammate and I know how hard he works. I was sad they didn't win, but on the other hand it'd have been super unlucky for me, if they won after I left.”

Of course you want to win Palermo more than anything, but would you feel bad if it were against your cousins on Ellerstina?

"I'd love to play a final against Ellerstina, why not? I don't really care which team I play against, I am used to playing against my cousins. It's just healthy competition, we want to defeat each other and I'd love Ellerstina and La Natividad to compete in the final."