MUSEUM ANNOUNCES HALL OF FAME INDUCTEES TO BE HONORED FOR 2022 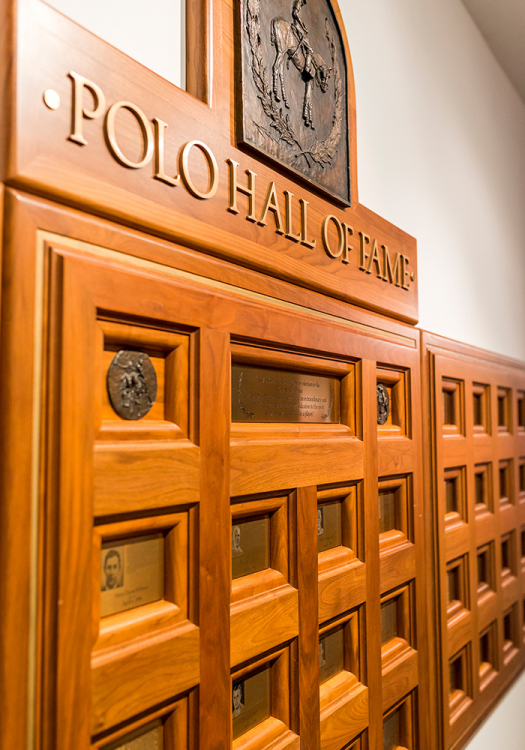 The Museum of Polo and Hall of Fame is very happy to announce that for the first time in history, the gala will honor two induction classes in one unforgettable night on Friday, February 18, 2022. Join The Museum of Polo and Hall of Fame in celebrating the 2021 Inductees Julio Arellano, John F. “Jack” Ivory, Dr. Paul Wollenman, Bert B. Beveridge, horses Silverada and Little Mary – and for 2022 Thomas J. ‘Tommy” Biddle Jr., Cornelius Vanderbilt “Sonny” Whitney, Daniel M. “Danny” Scheraga, Dr. Horace A. Laffaye, and horses Cynthia Lola and Jacobs. Save the date and make your plans early!

The Museum of Polo and Hall of Fame are able to hold the ticket price at $250.00 per person at a time when all expenses have gone up considerably. All thanks to the Museum's generous dinner sponsors Marc and Melissa Ganzi for making it possible to keep the dinner affordable for all to enjoy.

To further help with fundraising efforts, there are a limited number of Sponsor tables with premium seating available for $25,000.00 each (table of 10). They are offered on a first come, first serve basis - if you are interested in one of these tables or know someone who would like to sponsor, please call for additional details and to make arrangements as soon as possible.

The Museum of Polo and Hall of Fame are also making some changes to ensure the comfort and safety of guests: the attendance will be capped at 400 people and the size of the tent will be enlarged considerably to allow for adequate social distancing during the cocktail hour and for distance between the dining tables once seated.

There are 12 Inductees – a historic celebration of two years in one night, and to streamline the program, it will start earlier and move faster than in prior years. The doors open at 6:30pm and guests will check in at the main entry of the Museum to receive table assignments then proceed to the tent for the cocktail hour. Tables will be available to sit immediately upon arrival, if desired. All guests will be asked to be seated at 7:30pm to start dinner with the Induction ceremony to begin at 8:00pm.

Safety for COVID Protocols – at this time, the Museum recommends all attendees be vaccinated, and those who are unvaccinated to have a negative test within 24 hours of the event and to wear a mask when not seated at the event. The protocols may change with any evolving CDC recommendations. The Museum will try to advise of any changes, but recommend attendees check the CDC guidelines the day of the event for the most current information. 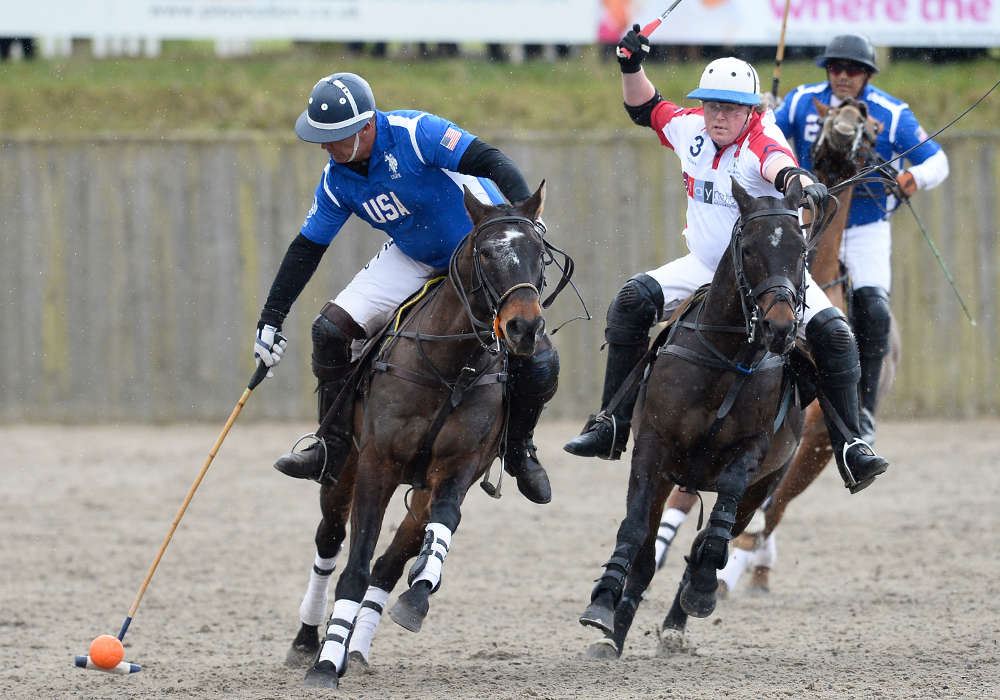 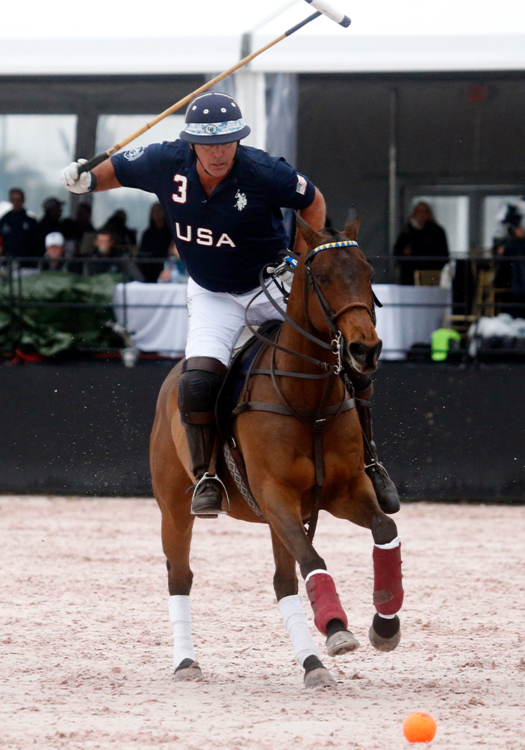 Born into a polo family, Tommy Biddle grew up in Aiken, South Carolina. At the age of 12 he played his first polo game and became a professional polo player at 18. At six foot three inches, with the build of an imposing football player, his presence on the polo field looms large, literally, and figuratively. Once called the “quickest big man to ever play the sport,” Biddle is a rare player who has been able to achieve almost equal greatness in both genres of polo, outdoor and arena. He became the fourth player in arena history to achieve a 10-goal handicap, while also reaching and maintaining an 8-goal outdoor rating. His list of accolades reflects the best of outdoor and the arena both in the U.S. and internationally and includes the 2002 U.S. Open Polo Championship®, four Monty Waterbury® titles, four Townsend Cup victories, and a U.S. Open Arena Polo Championship® win. Adding to his accomplishments, Biddle has become a highly-rated and well-respected USPA Umpires, LLC certified Umpire. 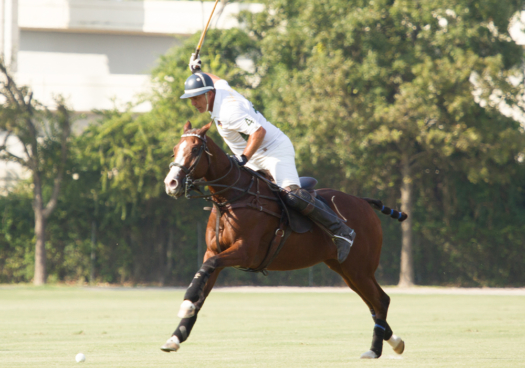 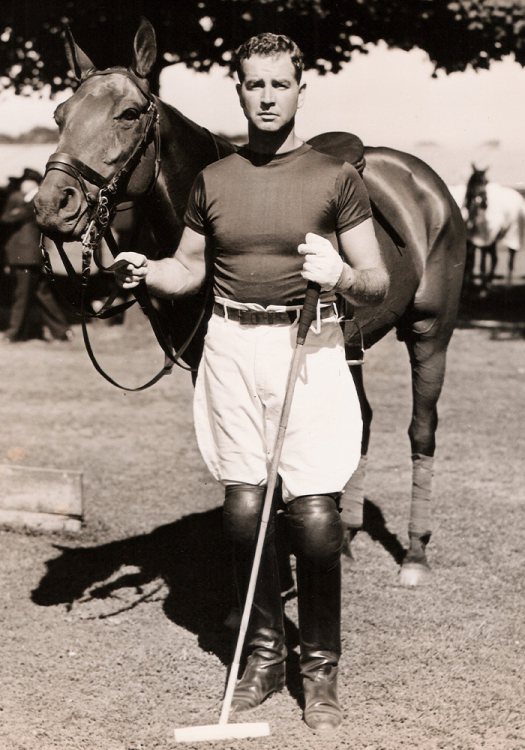 Cornelius Vanderbilt “Sonny” Whitney (1899-1992) - A man who “lived his life with a fullness that most men can only dream of,” Cornelius V. “Sonny” Whitney left a lasting mark not only in polo, but in most areas of life. Although thoroughly immersed in a business career and philanthropic ventures, he rose to a 6-goal handicap during his playing career that started around 1917 and lasted until the 1940s, a time that spanned the “Golden Era” of polo. Whitney was a formidable factor in all the major tournaments of those eras, winning the U.S. Open Polo Championship® three times and the Monty Waterbury® once. Whitney carried on the polo legacy of his father, Hall of Famer and member of the infamous Big Four, Harry Payne Whitney. Even with his playing days at an end, Whitney was well-known for raising outstanding racehorses, having 15 horses compete in the Kentucky Derby. The C. V. Whitney Cup was established in his name in 1979, originally played as the handicap side of the U.S. Open Polo Championship® and is still played today as part of the USPA’s GAUNTLET OF POLO® series. 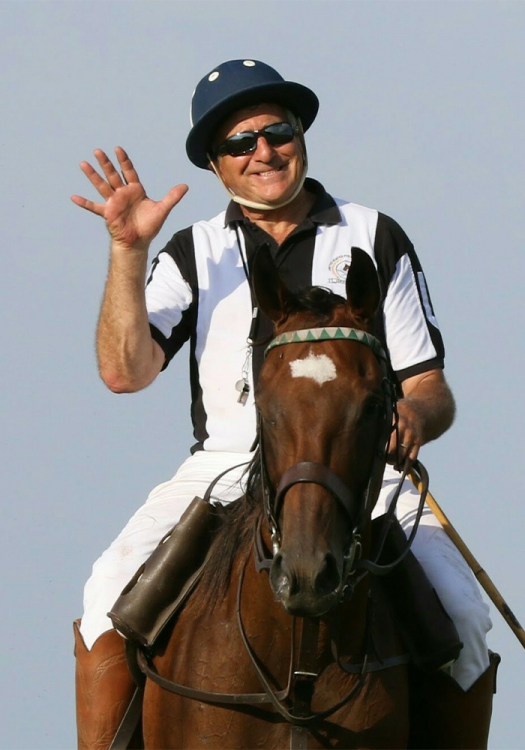 A guiding figure for the youth of polo, Danny Scheraga is dedicated to improving the quality of the sport and recognized for having spent a substantial part of his career nurturing polo players. Scheraga began playing at Cornell University (Ithaca, New York) and went on to be named their head coach in 1975. He established important programs for intercollegiate women getting them to the finals nine years in a row and winning the Women’s National Intercollegiate Championships three times. He then went to work for the USPA focused on instructing clinics, and ever dedicated to Intercollegiate/Interscholastic (I/I) development.

Scheraga moved on to spend 30 years with the Polo Training Foundation, serving 25 years as its first Executive Director. There, he spearheaded a number of ideas that went into developing programs and improving polo infrastructure by creating clinics, running a polo center at Brushy Creek in Texas for over ten years, and pushed for an expanded I/I tournament to improve chances for intercollegiate players. He has done much to bring in and influence a number of players who would go on to have a great impact on the sport. 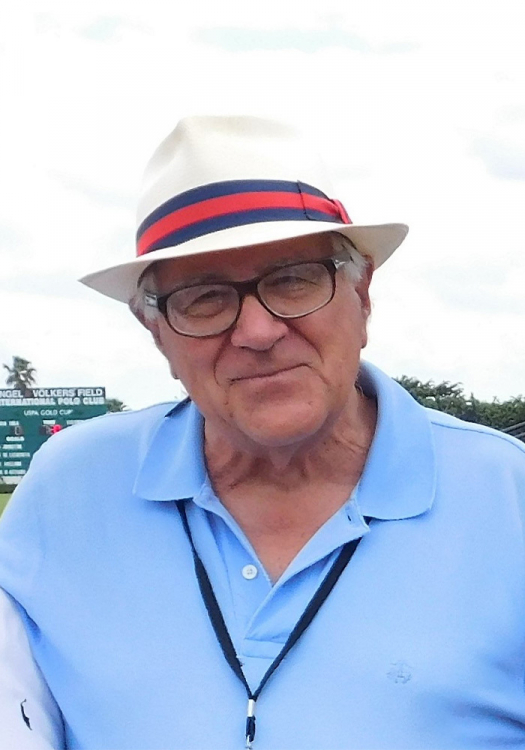 Horace Laffaye (1935 - 2021) left an impact on the sport of polo that is hard to match. He grew up in Argentina, playing polo there for a number of years before stopping to become a surgeon. He became enormously prominent and respected in this field, saving many lives with his surgical skills. A coincidental reawakening to the world of polo led Laffaye to pick up the mallet once again and play for another two decades at clubs throughout the Northeast. When his playing days ended, he took his knowledge and passion for the sport and focused it on the avenue that made him such an important part of the sport -as its most eminent polo historian. Dedicated and concise, he painstakingly researched, wrote, and published what are generally considered to be the most important treatises on polo, possibly of all time, and certainly in most recent years. In all, he authored and edited nine books and innumerable articles in both Spanish and English. Laffaye contributed his knowledge and talent to serve on the Board of Directors and Nominating Committee for the Museum of Polo, helping the organization grow immensely with his guidance. 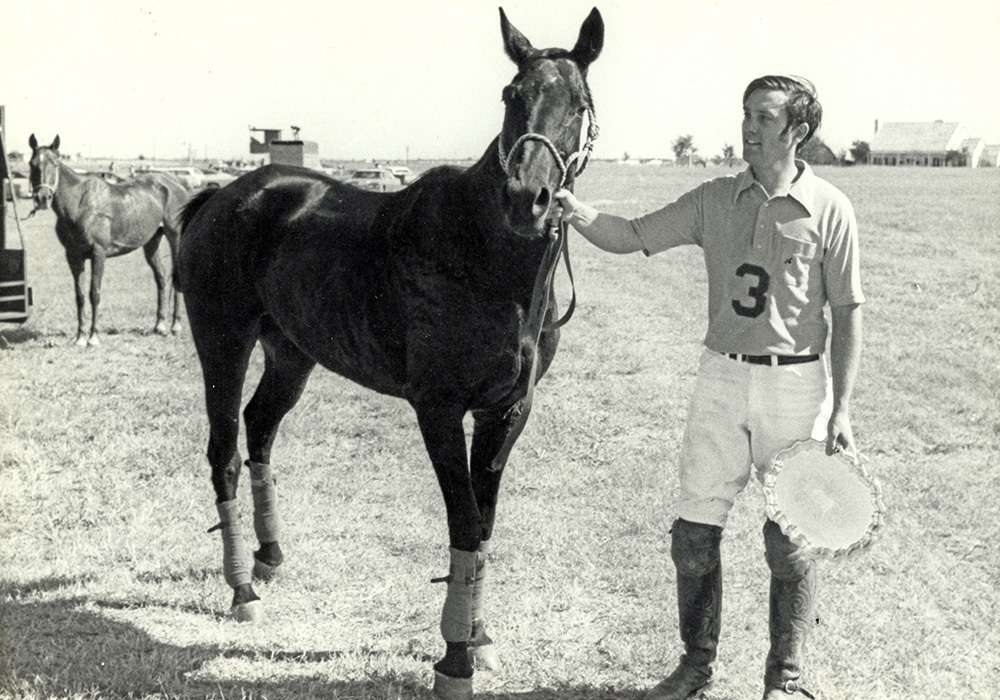 Cynthia Lola (Gold Hunter x Lola M) is just the kind of polo pony you would expect as an equine member of a legendary polo family. Foaled in 1960 in Missouri, the dark bay, thoroughbred mare was sold to Cecil Smith five years later. Both Cecil and his son Charles Smith knew she was destined for an outstanding future. She hit her stride when Charles took the reins, playing with distinction in all the major American tournaments ranging from the 1968 Silver Cup® to the 1975 U.S. Open Polo Championship®, a year in which she earned Best Playing Pony of the Silver Cup®. Over the course of eight years of outstanding performance, she continued to rack up several more Best Playing Pony awards. Cecil said, “I put Lola in polo and not everyone could play her. But Charles was a goal better on that mare than any other he ever had,” truly becoming the greatest mount to lead Charles to such success and recognition in the Hall of Fame. Cynthia Lola would die and end her legendary career in 1978. 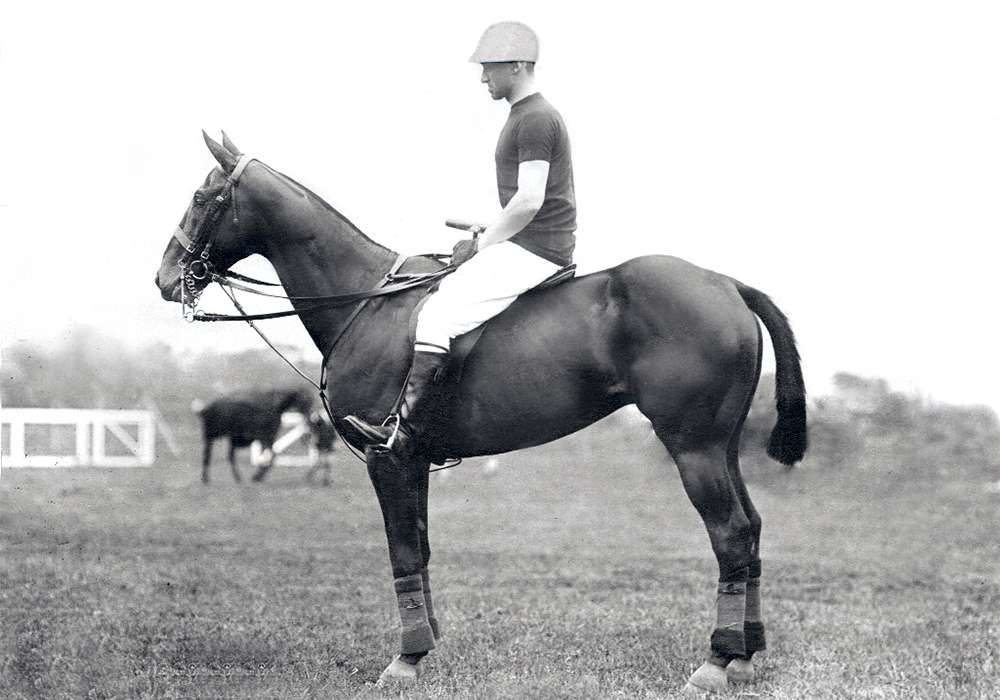 Jacobs’ career spanned ten years playing in all the top tournaments of his era including the famed international matches of 1913 and 1914. A venerable Texas-bred pony of unknown breeding, Jacobs broke polo tradition in its time. One of the first bigger ponies, Jacobs defined the approaching “modern” era of polo. Breaking the archaic height rule of 14 hands, two inches, Jacobs was a bay gelding who, standing at the unheard-of height of 15 hands, three inches, was big, rawboned, and rangy, yet incredibly speedy and powerful. Bringing fame and notoriety to the Texas cowpony, Jacobs was raised by J.C. Jacobs of San Antonio, before being sold to Whitney who made a habit of loaning his finest ponies to his best friend Dev Milburn to play. The duo of Milburn and Jacobs caught the frequent attention of the press and it was noted that Milburn’s best runs were on this mount. It is a well-known story that, along with a few other top horses, Jacobs was gifted to Milburn as a wedding present in 1913, a fitting gesture to honor the extraordinary relationship of a man and horse.