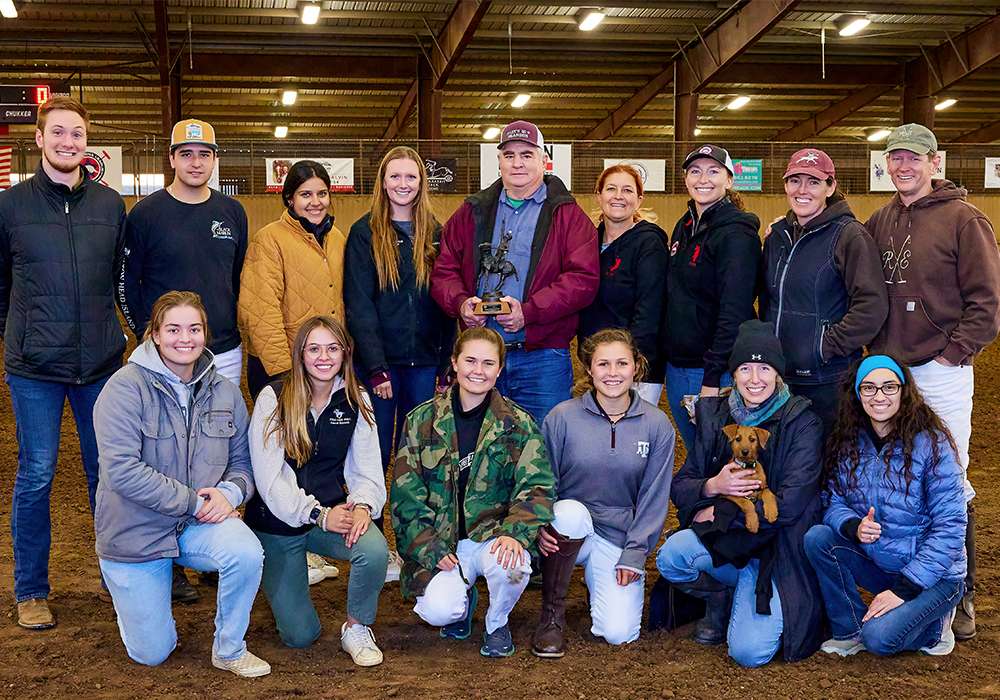 Anyone who has trained with or under Texas A&M (College Station, Texas) Polo coach Mike McCleary should be more than familiar with his famous saying, “Man. Man. Man. Line. Ball.” This and many other idiomatic sayings have come to coach McCleary after roughly fifty years of polo experience.

It is his extensive, prosperous career and life-long connections that have led to him winning the 2020 Russ Sheldon Award for outstanding contributions to arena polo. McCleary was presented with the award January 28, 2022, at the inaugural kick-off of the Texas Arena League’s (TAL) fifth season at Brookshire Polo Club (Brookshire, Texas).

“Mike has been committed to the team for fifty years with no real salary. He is here every day because he loves the horses, players, game, and just wants to give back. You will see him not just in the club, but at his personal field helping club and team members become better polo players. He doesn’t expect anything back but 110% from his players,” said Texas A&M Men’s Polo Team Captain Joaquin Arguello.

While many would guess McCleary has been in polo all his life, the start of his half-century polo career began in football. McCleary was initially a part of the Texas A&M football team in 1968 but quit after two short years once he was exposed to polo and decided to pursue it further. This marked the start of McCleary’s deep dive into the polo world.

“Mike is one of the most genuine people you will ever meet in the game of life and sport of polo.”  – Mason Wroe

McCleary has been an avid participant in both local and national polo circuits since his college days. Even though he left school for a time to marry his high school sweetheart, he later returned to Texas A&M’s campus. Between playing and coaching, polo has taken McCleary across the country. From regional to national competitions, he has always made it a point to follow in support of his team. Even despite all his cross-country travels, McCleary’s heart and home remain in Aggieland.

He is the current owner and manager of River Bend Polo Club (Wellborn, Texas) as well as the head coach for the Texas A&M Polo team. To date, he still hosts guests on his property to play and visit. In fact, every Thanksgiving he invites past and present players over to share a meal at his table. The connections he has made over his prosperous career ensure that he is well-accompanied and appreciated.

“Mike’s knowledge, guidance, and dedication makes the club what it is and defines our strong culture. The impact he has on each player that comes through Texas A&M Polo is incredible. When in doubt, ask Mike and you’ll get the right answer. This goes for in and outside of the arena. Drink your shark milk and give 100%!” shared Whitney Walker, Texas A&M Polo Club President, and women’s team player. 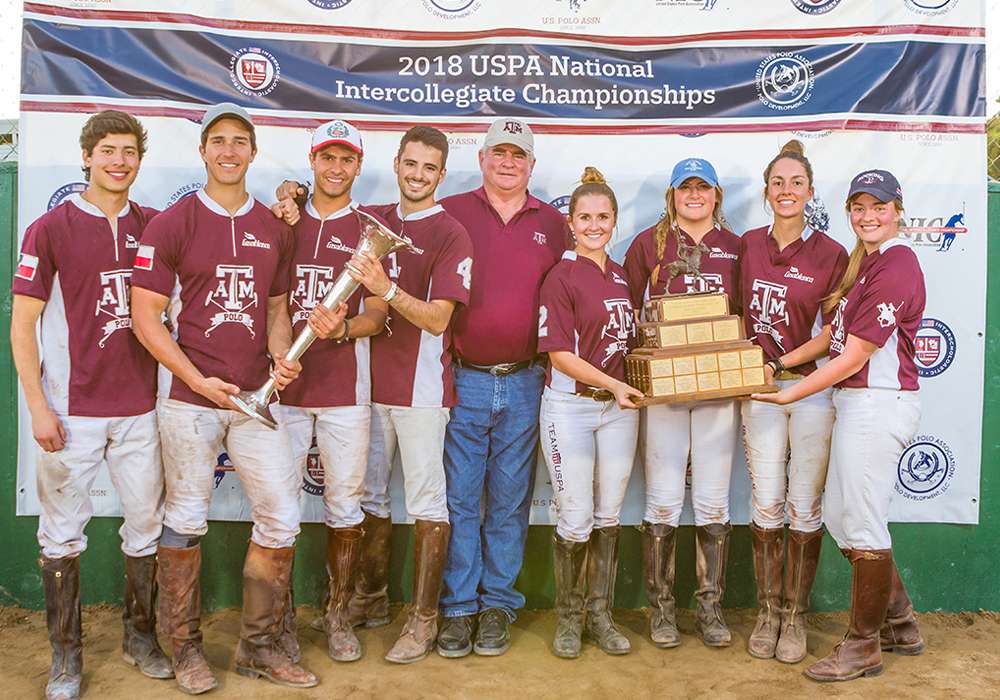 During a two-year stint, McCleary coached at Colorado State University and led their polo team to victory in two consecutive National Intercollegiate Championships in 1993 and 1994. Even in recent years, he continues to coach in College Station, Texas, and train intercollegiate players at a professional level. Both Texas A&M’s women’s and men’s teams won back-to-back National Intercollegiate Championships in 2018 and 2019 due to his guidance. McCleary’s teaching philosophy is based on the premise of developing players into the best they can be and the results speak for themselves.

2019 Russ Sheldon award winner, and long-time friend of McCleary, Danny Scheraga was pleased to hear about McCleary receiving the award. Scheraga met McCleary in 1972 as opponents in a polo tournament and they have been friends ever since. “Polo has been the love of Mike’s life through thick and thin. He is a knowledgeable horseman and quiet rider that never abuses a horse,” Scheraga commented, “besides being a consummate horseman, he looks at the whole picture, doesn’t get upset with decisions made that he can’t control, and adjusts what needs to be done. He’s calm and collected, connected with youth, and never badmouths anyone.”

Scheraga and other friends of McCleary were happy for him to receive the honor and feel that he embodies what the Russ Sheldon award seeks to commemorate.

“To say they really broke the mold when they made that one, to describe Mike McCleary, would be an understatement,” shared Texas A&M alum Mason Wroe*. “A larger than life human and a teddy bear down deep inside. Mike is one of the most genuine people you will ever meet in the game of life and sport of polo,” Wroe continued. “Mike offered help, guidance and motivation to young college kids, like me, in and around the polo field. Mike taught hard work, the value of character and striving toward your goals. I can’t think of anyone more deserving for the Russ Sheldon Award then Mike McCleary. He is a remarkable human being and a one-of-a-kind individual; I congratulate him and thank him for all the memories and time we shared. I look forward to many more!” 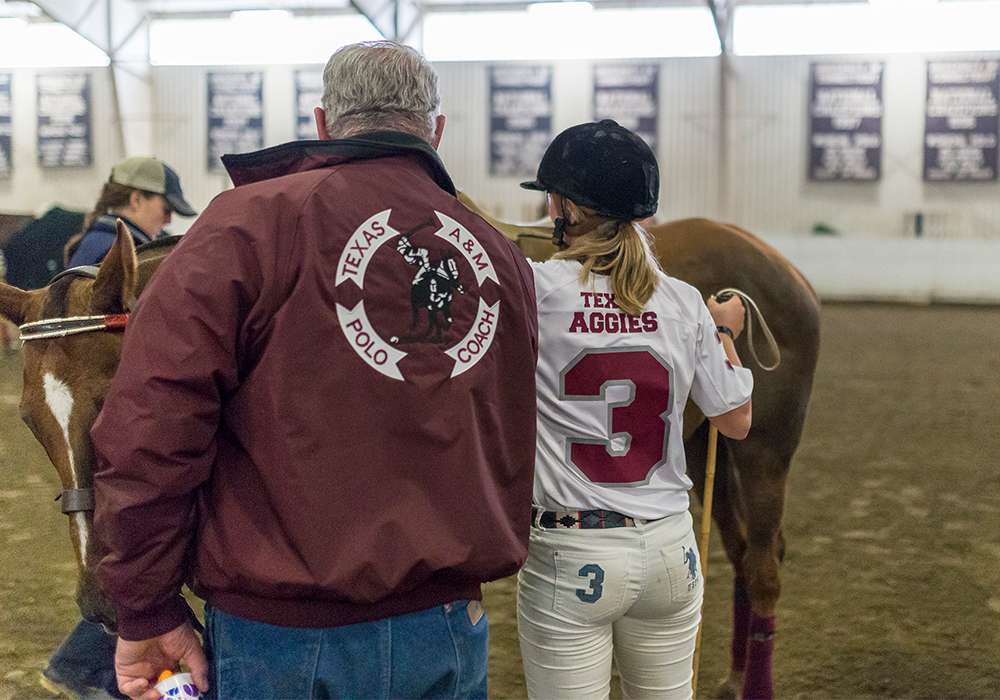 Every day, Mike McCleary continues to give his all to the sport of polo and raise the next generation of professional players. He is a man-in-action that has stayed busy with endeavors such as teaching scuba diving, serving as a Justice of the Peace, and recruiting students for Texas A&M. A man so busy, in-fact, that it took a year to track him down to accept the 2020 Russ Sheldon Award. Now, it is with great pride and honor that McCleary brings home this recognition of not only his contribution to arena polo, but also of the many lives he has touched through the sport.

*Mason Wroe is Team USPA Alumnus. Team USPA is a USPA program designed to enhance and grow the sport of polo in the United States by identifying young, talented American players and providing mentored training and playing opportunities leading to a pool of higher rated amateur and pro players and the resultant giveback to the sport of polo.