Located among the lofty pine trees and rolling hills of Northwest St. Tammany Parish in Folsom, Louisiana, just 45 miles north of the bustling "Big Easy" culture and nightlife, lies New Orleans Polo Club (NOPC). Serving as the only active USPA club in the state, NOPC has a long-running history in Louisiana, having resided on the north shore of Lake Pontchartrain since the mid 1970s. Many of the same core members have been with the club since its inception despite several location and name changes. Officially becoming a USPA Member Club in 2001, New Orleans Polo Club has thrived due to hardworking management, dedicated players and their ability to stay relevant in an ever-changing climate. 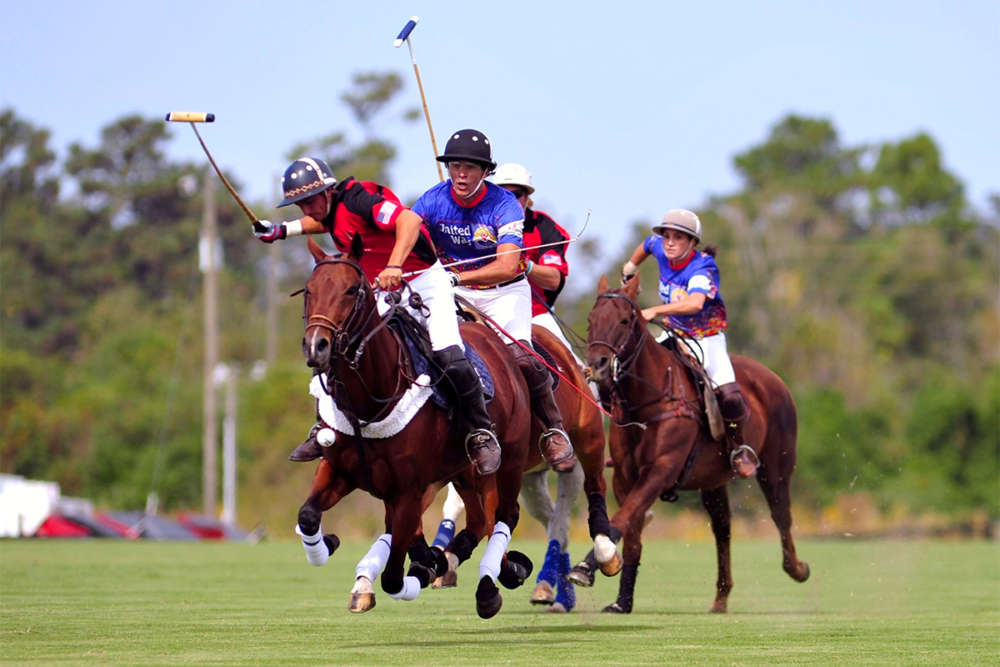 NOPC offers a full six-and-a-half month playing schedule broken up into spring and fall seasons. “We have several different facilities, but primarily focus on two main ones,” said Club Manager Doug Parsons. “The first is Innisfree Farm, a location we began using in 1992. The other is SummerGrove Farm, owned by club member David Fennelly, where we started playing in 1997 and use for our large events.” Each of the two main NOPC locations have more than one regulation field to accommodate USPA-sanctioned games and events. “We also have some practice fields at surrounding area farms,” Parsons continued. The club has benefited from the local farm owners’ willingness to change and adapt their facilities for polo. “SummerGrove Farm was originally called the Folsom Thoroughbred Training Center and it was a race track operation,” explains Parsons. “The track is still there, but the rails and starting gate have been removed. We use it to pony horses now, and they have 60 stalls in two different barns next to that field. We have paddocks available at both main farms and there are a few hunter jumper facilities that will lease barns and paddock space to players. We don’t offer a full board program, because a lot of people in polo come into town with several horses and their own caretakers, so we have found that it works best just to lease out space.” 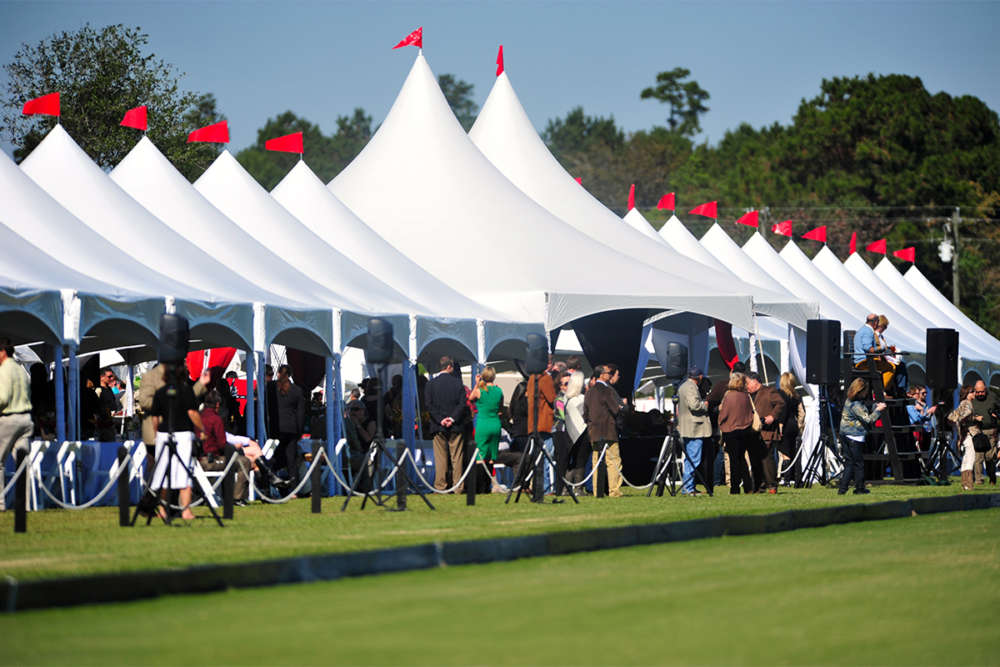 Aside from field maintenance crews, as the only full-time staff member at the club, Parsons wears many hats. “I’m the busboy, laundry man, garbage man, chukker organizer; really just about anything that needs to be done,” he said lightheartedly. “I have managed the club for about 10 years. I was president of the club in the 90s and did some management of the club then. In 2008, I was asked by one of the farm owners to manage the club again and I have been here ever since.”

Those from out of town may not be familiar with the plethora of equine activities the Folsom area boasts. Jumpers, hunters, western pleasure and racehorse operations are all prominent in the city. Polo compliments the wide offering of disciplines, and NOPC has drawn from this large pool of horse enthusiasts when looking for new members. “Our best success over the last four or five years has been getting people out of the jumping barns,” said Parsons. “We are most successful through word of mouth. One of our dedicated members, Lori Summers, has been involved in jumping, and one of the pros here was dating a woman that was very involved in jumping. So we were able to convince many of their friends to come out and give polo a try."

“It is great to have people from other disciplines try polo because they ride pretty well already, they understand the expense of the horses and they are competitive!”  – NOPC Manager Doug Parsons 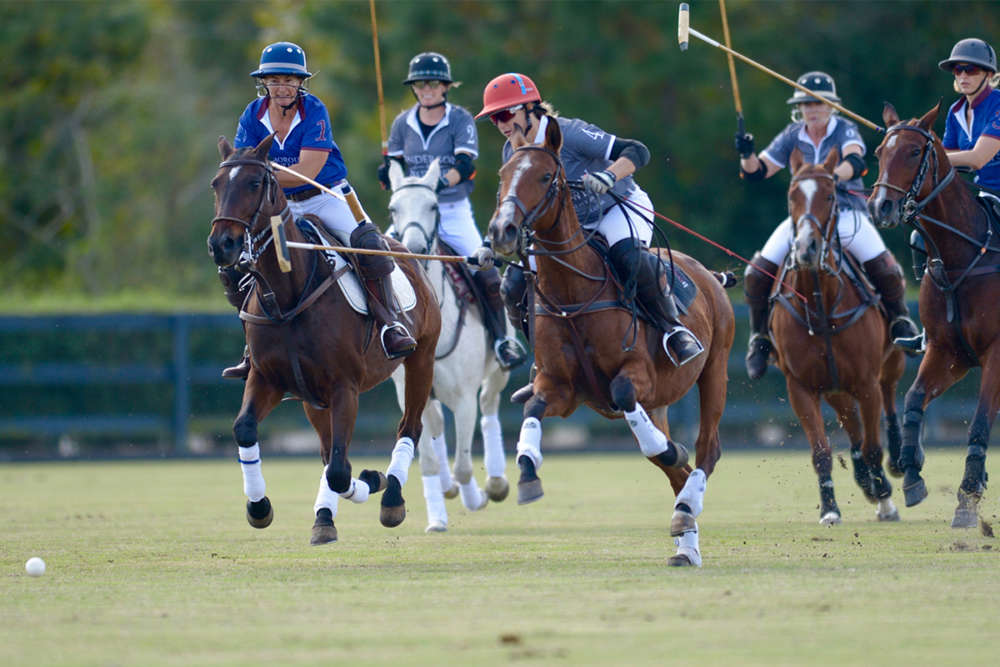 New Orleans Polo Club provides players with a well-rounded offering ranging from practices and Margarita League, to large charity events. Six USPA tournaments provide competitive play each year, and most recently the club added a well-received USPA Women's Charity Challenge. “We hosted the inaugural women’s challenge the week before the U.S. Open Women’s Polo Championship® in Houston, [Texas,] last year and have plans to do the same again this year,” Parsons said. The tournament benefitted the Thoroughbred Retirement Network of Louisiana, an organization dedicated to rehabilitation of Off The Track Thoroughbreds, and raised over $14,000. Ladies from Texas, Alabama, Kentucky, Louisiana, Puerto Rico and England battled it out. Visiting professional Sarah Wiseman led her teammates Lacey Conway, Lori Summers and Sara Regis Torres to victory and then went on to win the most prestigious USPA women’s tournament the following week. The professionals and out-of-town players loved competing at the club, with plans to return again. "Playing in the New Orleans Polo Club USPA Women's Charity Challenge was an absolute blast,” recalled visiting professional Courtney Asdourian. “Being that it was my first time in New Orleans, the club representatives could not have been more accommodating and welcoming. The tournament was professional, competitive but most importantly, fun for all involved." 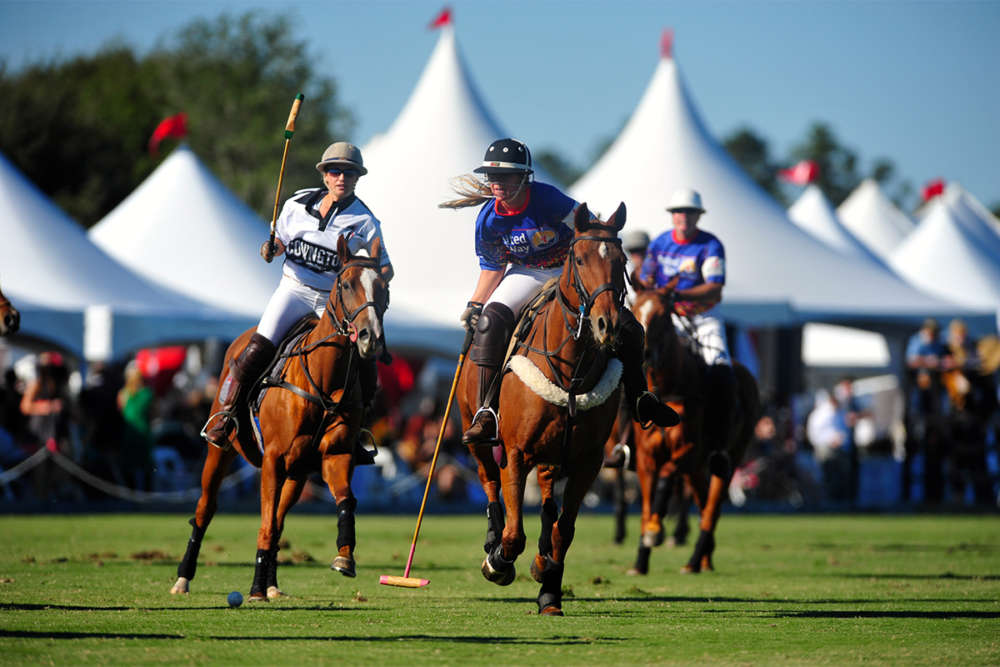 The USPA Women’s Charity Challenge supported an organization close to the hearts of many members of the club who play polo on retrained racehorses. “During the event, they painted a big heart on the flank of all of the horses that were playing that came out of the Thoroughbred Retirement Network,” said Parsons. “Lori played several rescue horses in the tournament that came out of that program. There is a big racing community here. We have the New Orleans Fair Grounds Race Course in New Orleans which is owned by Churchill Downs, so there are a lot of farms in our area that train here and race there. We really benefit from being able to find horses that may have not been suitable for racing, but can be retrained for polo.” 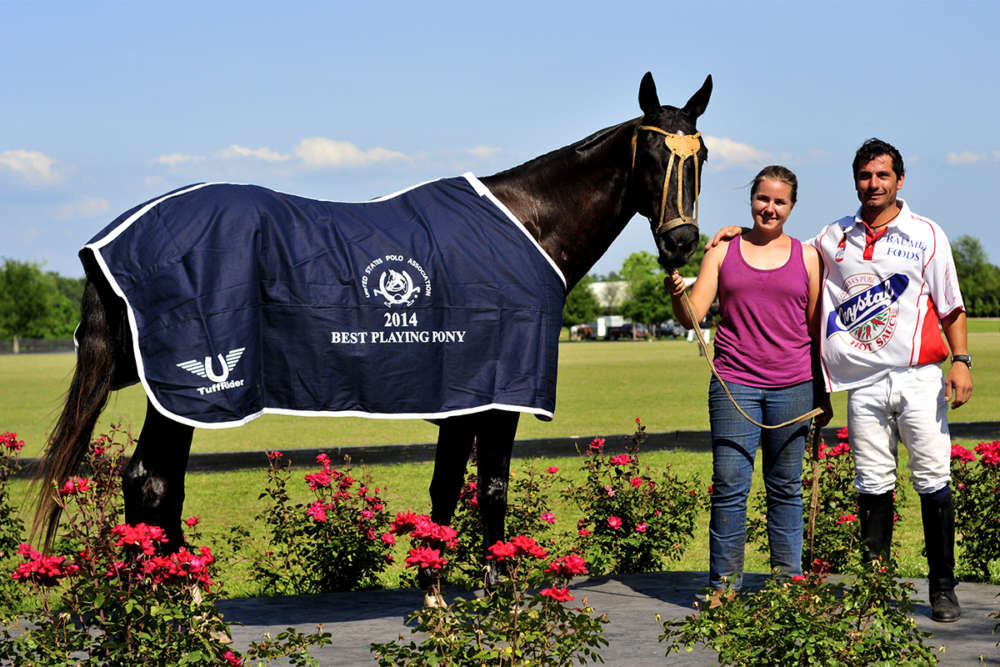 Charitable causes have been a large focus for NOPC and its members for many years. The club hosts several charity polo matches each year benefiting the Southern Hotel, Greater Covington Junior League, New Heights Riding Center, Land Trust for Louisiana, and the LSU Ag Center. Now in its twenty second year, The Harvest Cup is considered the main charitable event for NOPC drawing a robust 2,000-2,500 spectators each year. “We have two polo games in one day and there is usually a concert from a locally well-known music entertainer after the games,” said Parsons. “There are a lot of local restaurants and bars represented, a live auction, silent auction and several opportunities to donate to the Junior League of Covington. It is probably the second or third largest community event in our parish each year.” 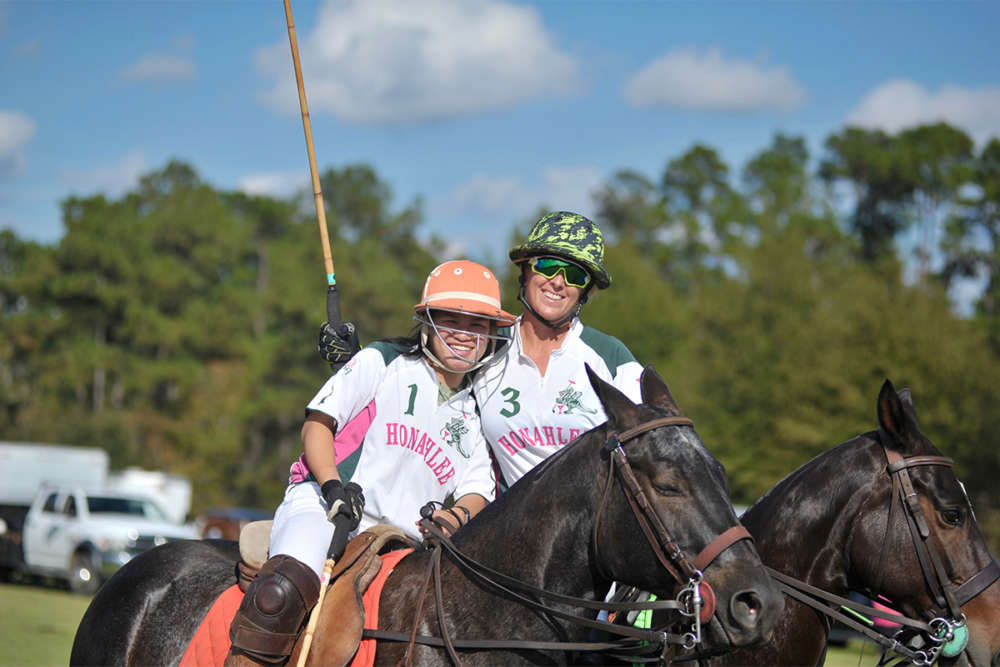 NOPC has found companies that relate to their unique demographic ranging from polo gear suppliers to stock brokers and boost revenue through sponsorship of their games. “We have an awards stage for trophy presentations and we do a number of different things for our sponsors,” explained Parsons. “The local Ford dealership is one of our sponsors. We put out a banner for them on the awards stage and then they bring out trucks and display them at the fields for the bigger games and USPA matches. You have to give the sponsors a bang for their buck, the more exposure they get, the more likely they will want to sponsor your event. Many of our spectators and players drive trucks so that works out for Ford!” 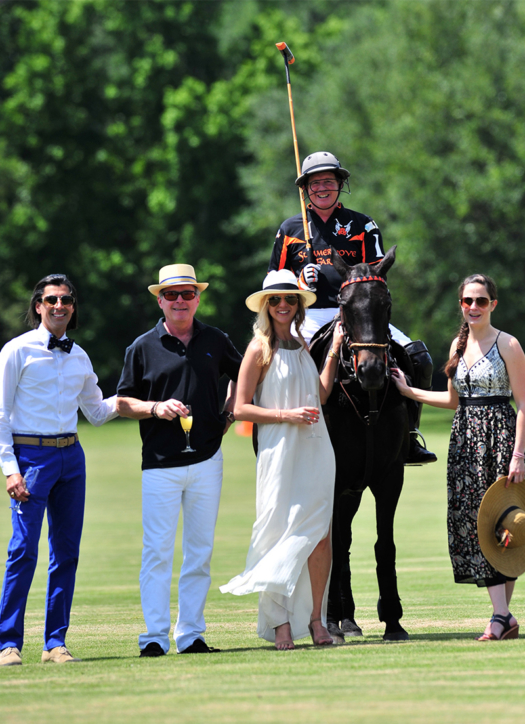 So many spectators in one place can be beneficial not only to the charitable organizations and sponsors, but it also presents an opportunity for the club to gain new members. “We have had several spectators that want to try polo,” said Parsons. “When someone shows interest, we try to get them to come out and get on a horse as soon as possible. It is easy for a person to say that they want to try it when they are in the moment at polo, but then they get home and maybe lose the spark, so we contact them within a few days after the event and invite them out to ride. I obviously tell them all about polo, but ultimately the way you get hooked is to get on a horse and feel what it is like to hit a ball, so we try to do that in the first lesson." 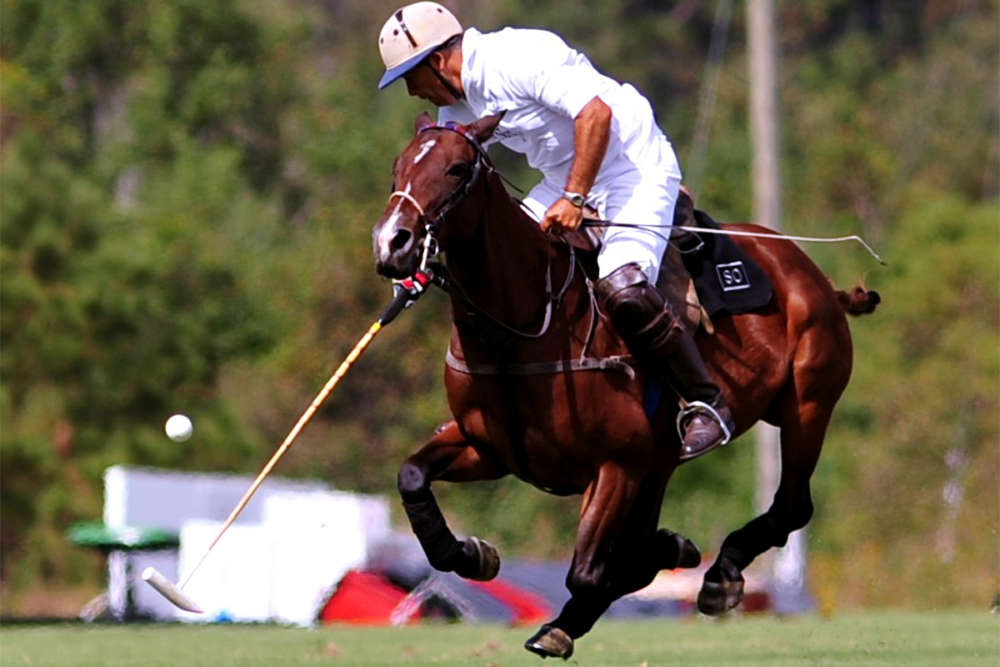 Ever growing and changing, New Orleans Polo Club adapts to member needs. “We mostly play 0- to 2-goal and some 4-goal polo here,” said Parsons. “As our membership has aged, we have moved our playing level down as many clubs in the country have.” A truly versatile club, however, the level of play fluctuates year-to-year based entirely on the current polo climate.

“We try to run a very organized club that is still a lot of fun,” said Parsons. “It is obviously very cool to come to New Orleans, as it is one of the most popular cities, not just in the country, but in the world. We tie in social events in our area to our club such as a yearly crawfish boil and Mardi Gras-themed party for our Mardi Gras Cup.” As for the future, NOPC has a member looking to build more fields which will enable the club to grow membership and play even more polo. “I think people expect us to be playing on the bayou with alligators, but that is not the case at all,” Parsons joked. “We have amazing facilities, great people, and always welcome new members of all levels and ages.”