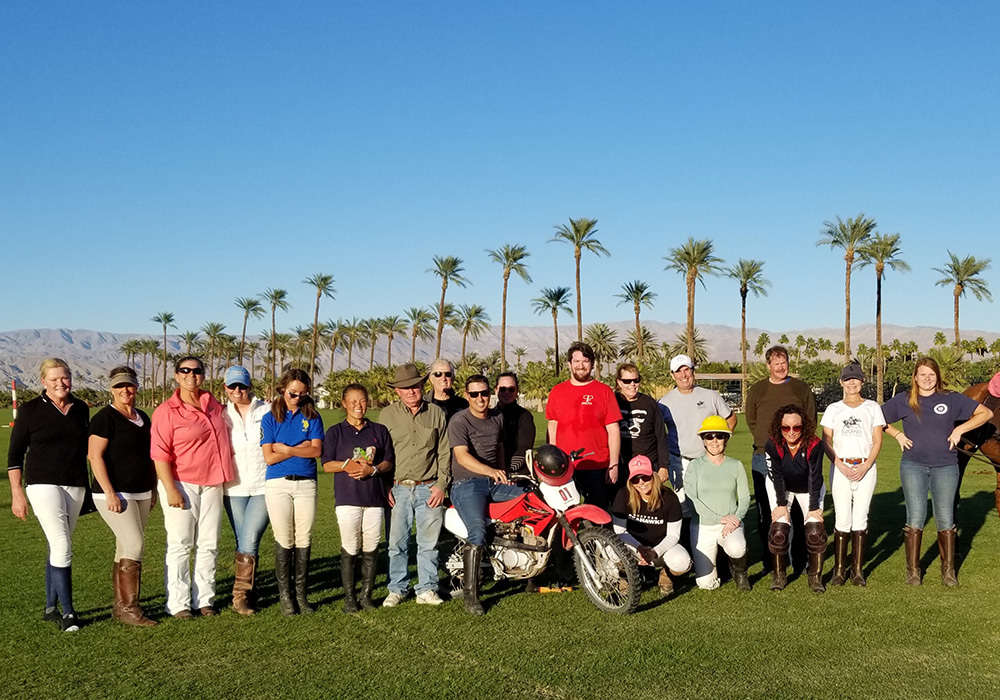 Attracting 16 participants this year, the 2019 Linfoot Clinic at Eldorado Polo Club in Indio, California, featured clinicians Corky and Kathy Linfoot, Jared Sheldon and Robin Sanchez on the weekend of December 14-15.

“The Eldorado Polo Club is an incredible host for this clinic in its fifth year,” Corky Linfoot said. “The staff at the club do everything they can to create an opportunity for individuals who want to learn and to be involved in different formats such as a Pro Pool or a coaching league system. They enable people to see what it’s like to play on good fields. Eldorado’s fields are in excellent condition.”

Participants had nothing but good things to say about the clinic and how it benefited them personally. Traveling from surrounding areas in California as well as states including Texas, Oklahoma, and Arizona, the participants had access to some of the best instructors in the industry. “I came to the clinic hoping to advance my skills and get more experience playing with others,” Kim Hillin said. “My biggest take-away has been learning tactics and strategy.” 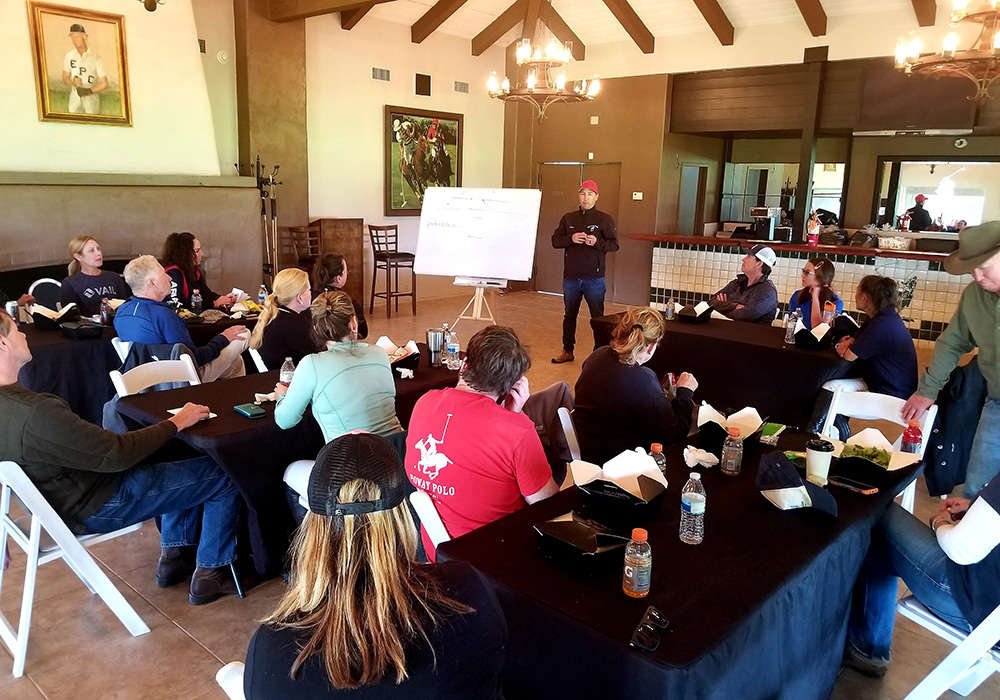 The group of 16 represented a diversified level of polo. Some of the participants had played tournament polo at the 4-goal level and above, others had only been riding less than six months and others were new to polo but had come from other equestrian disciplines including dressage, jumping, reining and cutting.

Signing up for the clinic for different reasons, participants focused on the individual areas they wanted to improve on. “This is my second time attending the clinic and I have learned a tremendous amount,” Susan Bosserman commented. “I retained a lot from the first clinic with regards to field strategy, but in this clinic I’ve really been able to work on my swing mechanics.” Fellow participant Rachel Hanson added, “I hoped to get a better understanding of the game and improve my technical skills and this clinic has been absolutely successful in that regard. I learned some things to really help my swing. My follow through has improved and because of that I am getting more distance. The game time and being able to ride different horses has been a lot of fun and the weather here in the desert is great.” 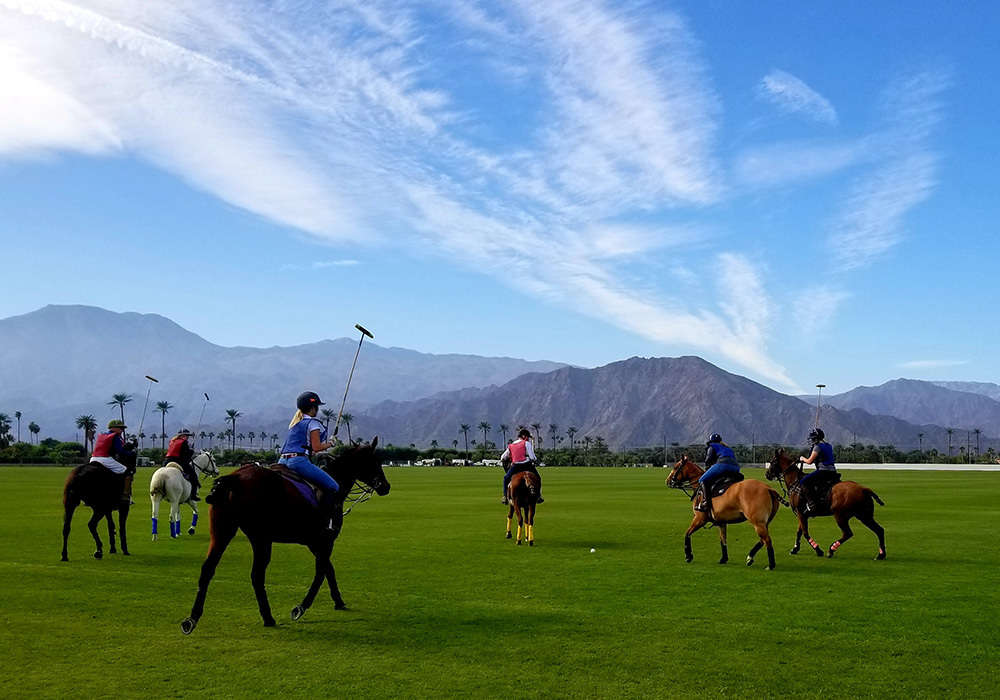 Informative for players of all skill levels, the Linfoot Clinic covered a variety of topics in two days. “This clinic is wonderful for both the beginner and seasoned player,” Carolyn Downey said. “It teaches the basics of everything – riding for polo, horsemanship, game play, and hitting. I enjoyed learning various techniques and strategies.”

“I came to the clinic because I want to learn from the legendary Linfoots and the other clinicians who are experts,” Sarah Flynn explained. “I’ve had a lot of lightbulbs go off in my head because of the instruction I’ve received. I appreciate the enthusiasm and humor in the coaching, and the stories that go along with everything that is taught. Progression of teaching was so important for what I learned in technique, rules, positioning and all of the shots we worked on.”

Kathy Wood plays at both Skull Valley (Skull Valley, Arizona) and Lakeside (Lakeside, California) Polo Clubs. “The best thing about the clinic was that there were four professionals,” Wood said. “Their ability to explain the same thing to me in multiple ways so that I understood was really beneficial.” A beginner himself, Keith Edwards learned a lot of valuable information during the clinic. “I would recommend this for people like me who are just starting out and I’d also recommend it to players further along in skill because they would pick up on the nuances that I missed,” Edwards remarked. 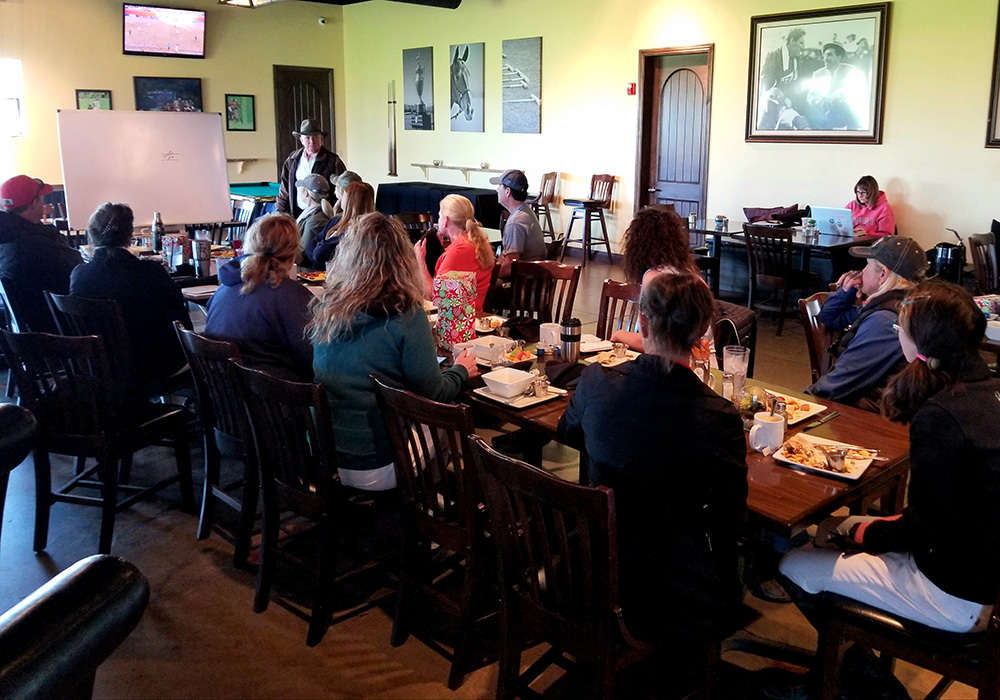 Participants meet at the Cantina restaurant at Eldorado Polo Club for some whiteboard instruction.

Teaching a myriad of clinics over the years, Linfoot expressed that this was an ideal size and it was a particularly good group. “Across the board, although we only worked with them for two days, there was no doubt that each and every one of the students was able to take away some point or aspect that will enable them to make the next step with their involvement in polo,” Corky Linfoot said. “We tried a few different aspects to our program this year that worked out well. One we called 'speed dating' where we had four separate stations and we broke the participants up into groups and worked individually with each group for half an hour. Robin worked on the nearside at one station, I took offside backshots at my station, Jared taught offside forehand and Kathy worked on controlling, rating and stopping horses. Overall, we felt that this was one of the better clinics and the participants were outstanding.”

The Linfoot Clinic is held annually in December at Eldorado Polo Club interested parties are encouraged to sign up for 2020. For more information on scheduling the Linfoots for a clinic at your club, go to www.linfootpolo.com.