Possessing the flexibility and patience necessary to teach both first-year undergraduates and varsity Intercollegiate/Interscholastic (I/I) players, the Harvard Polo string’s adaptability has earned them a new assignment: therapeutic horses to military service members. Although COVID-19 brought the intercollegiate season to an abrupt halt in 2020, it simultaneously served as a springboard of opportunity, bringing Harvard Polo coach Crocker Snow’s long-awaited dream to fruition. Serving in the Navy during the Vietnam War, Snow initiated a partnership between the intercollegiate team and Homebase, a local Boston-based organization which treats veterans and active service members with PTSD and related invisible wounds from war. Each event run entirely by current Harvard student and alumni volunteers since its inception in August 2020, Homebase weekends at Harvard have proven in a short period of time to be just as transformative for volunteers as they are for veterans.

“It's extremely rewarding to share the Harvard polo ponies with people who can really benefit from them. To be able to share each horse’s unique personality as well as their physical abilities is a privilege and I'm certain it's good for my own wellbeing too.”  – Albany Mulholland, Harvard alumnus ‘12 and British Army veteran

Piloted in the fall of last year and resuming summer 2021, Homebase weekends are all about giving service members a much needed respite from the intensity of therapy sessions while introducing them to polo at the Harvard Polo & Equestrian Center located in South Hamilton, Massachusetts. Every other Saturday welcoming a new cohort of seven to 12 men and women (all branches) halfway through Homebase’s two-week Intensive Clinical Program, volunteers use Harvard polo ponies, including Pretty Bird Woman’s T-Bird, to teach skills such as tacking up and riding. “The horses are still in playing mode, but they just know how to adjust to the veterans,” said Harvard polo alumna and volunteer Danielle Lussi. “It’s so incredible that they can be ready to perform at their best on a Sunday game, but are really relaxed the day before with the veterans.” Standing calm and quiet to be brushed one day and switching gears for a competitive game the next, the Harvard string are the perfect ambassadors for the sport for people of all ages, skill levels and backgrounds.

While a full schedule of guided activities is provided for the day, the Harvard volunteers always allow for flexibility to adjust the plan based on the group. “Each group is different and you have to be sensitive,” Snow emphasized. “Our role is not to add to the treatment they are receiving, but instead give them a relaxed weekend.” Each at different stages of the recovery process and utilizing the farm as an outlet to decompress, veterans are encouraged to participate as much or as little as they feel comfortable. “Frequently some of the veterans arrive tired and less than enthusiastic but as soon as they touch the horses they're keen to learn and connect with them,” said Harvard Polo alumnus and volunteer Albany Mulholland. “Everyone who comes is treated as an individual so some will be stick and balling by the end of the day while others are content to watch the horses graze and appreciate their beauty.”

Participants are treated as individuals and some will be stick and balling by the end of the day. ©Amy Trytek

“I had no idea going into the day that I would build relationships with some amazing people who helped restore my faith in humanity and allowed me to trust. Amy [Trytek], Danielle [Lussi], Martin [Luginbühl], and Chelsea [Messinger] have become my newest friends, along with Yahtzee of course. They are not just friends though, they are my polo family.”  – Captain Joel Silva, U.S. Army Retired

After introductions and a brief farm tour, participants are broken up into small groups before heading out to collect a few horses from the paddock and learn how to tack up for a game. “A lot of the veterans really love the brushing element of it,” Lussi shared. Starting with an exercise bridle and working up to a full bridle with draw reins and polo wraps, the veterans are consistently noted for immediately picking up each new skill after only one demonstration.

“It’s quite fascinating - everyone's been very attentive,” Lussi commented. “They learn so quickly - you explain how to do something once and typically they can already replicate it shortly after.” “I think because of their military background they pay close attention and internalize instructions really well, so we are able to do a lot in a short amount of time and it goes very smoothly,” Harvard alumna ‘12 and former team captain Marion Dierickx added. “Personally, I find it very rewarding to see what we can accomplish over the course of one weekend with them.” 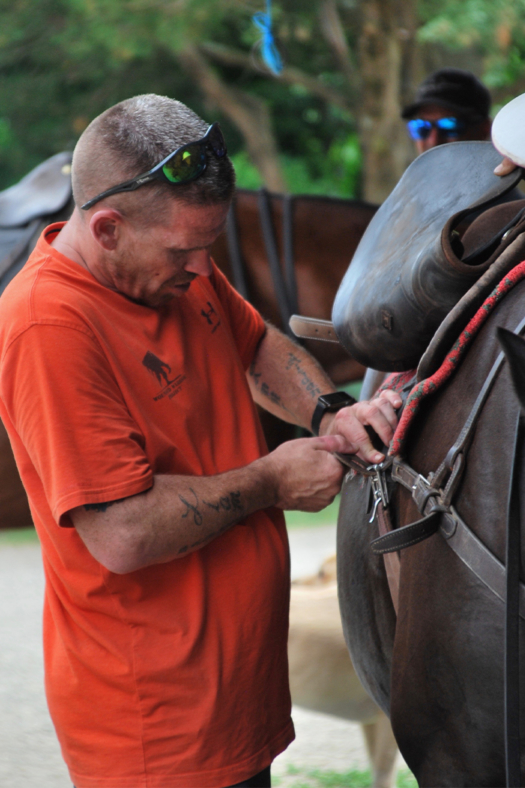 Veterans learn skills such as how to tack up for a game. ©Amy Trytek

Choosing from activities including hiking, farm improvement duties such as mending fences, or rolling bandages on the hillside, participants are given the freedom to decide how they would like to spend their time and at what pace.

Although Harvard Polo is associated with an ivy-league university and by nature viewed through a lens of privilege, the hard-working student athletes are challenging outside perceptions. “Our farm is nice, but some of the facilities could use some maintenance and we work our butts off,” Dierickx said.

Transitioning after lunch into riding for the remainder of the afternoon, the participants tack up a new group of horses and focus on learning the basic skills in the arena. “Lately the groups that have been doing well, we've taken on a short trail ride which has always been a hit,” Lussi said. “We walk through the woods and pass a neighboring field full of rescue donkeys.”

“Some show up to the farm having a certain expectation about what Harvard polo may be, but the reality is vastly different. We are very much a working, hands-on program and they walk away from this experience having a changed perception of polo.”  – Marion Dierickx, Harvard alumna and volunteer 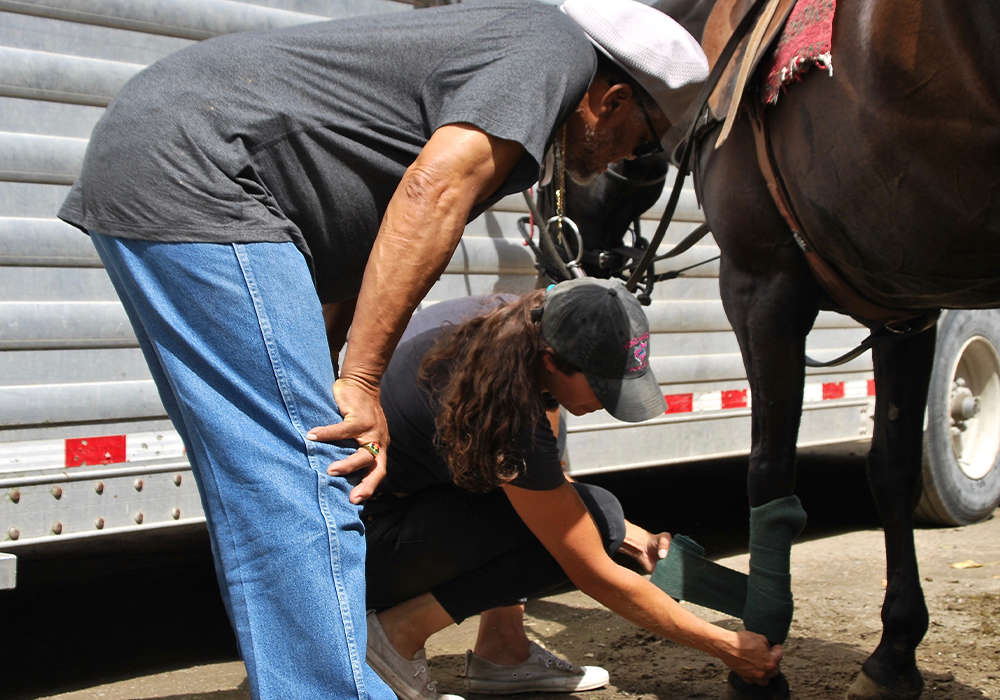 Often presented with situations they weren’t anticipating, the volunteers themselves are learning as they go, adjusting to the needs of each participant as their eyes are opened to the effects of trauma. Working with a woman who shared she had short-term memory loss, Lussi was initially caught off guard when asked to repeat a horse’s name several times. “I was a little bit unprepared for that because my first experience was with a group who remembered every detail,” Lussi shared. “You begin to realize if a participant is asking the same question multiple times maybe they don't want to tell you that they suffer from short-term memory loss. Not wanting to embarrass anyone I continue to remind the group about the correct way to do something, for example rolling each wrap.” Gradually gaining a more heightened sensitivity to both disclosed and undisclosed conditions, the volunteers and Harvard Polo string have also helped many people begin to overcome their fear of horses. “We have this really sweet, old gray mare nicknamed Granny and she’s helped at least four or five people I've worked with,” Lussi mentioned. “She just stands there so quietly and the veterans ended up hugging and riding her, it was really sweet.” Assessing each individual’s level of comfort, the volunteers have succeeded in creating a safe and enriching experience for everyone. 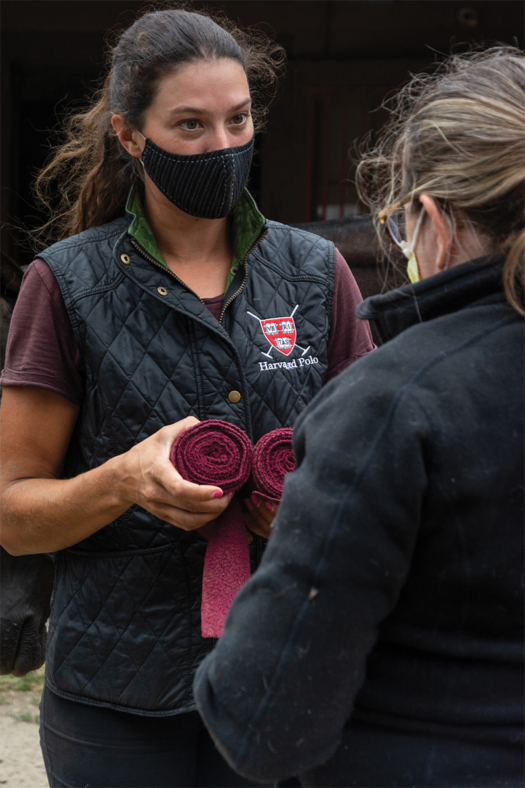 Bringing people together during an especially difficult time, Homebase weekends have served as the bridge between two worlds, allowing both to come away with a better understanding of each other. Although the volunteers are not able to fully relate to what their visitors have gone through, the brief interactions have been no less fulfilling. “Helping people overcome fear has been the most rewarding part for me – figuring out who is hesitant and showing them we have very sweet polo ponies that will look after them,” Lussi shared. “Also to just be there to listen to their stories if they want to share or just standing there in silence brushing the horse together – it’s a special experience.” “Especially during the COVID-19 shutdown when this program started I felt very isolated and disconnected, so being able to contribute and feel like I was making a difference was very therapeutic for me,” Dierickx added. 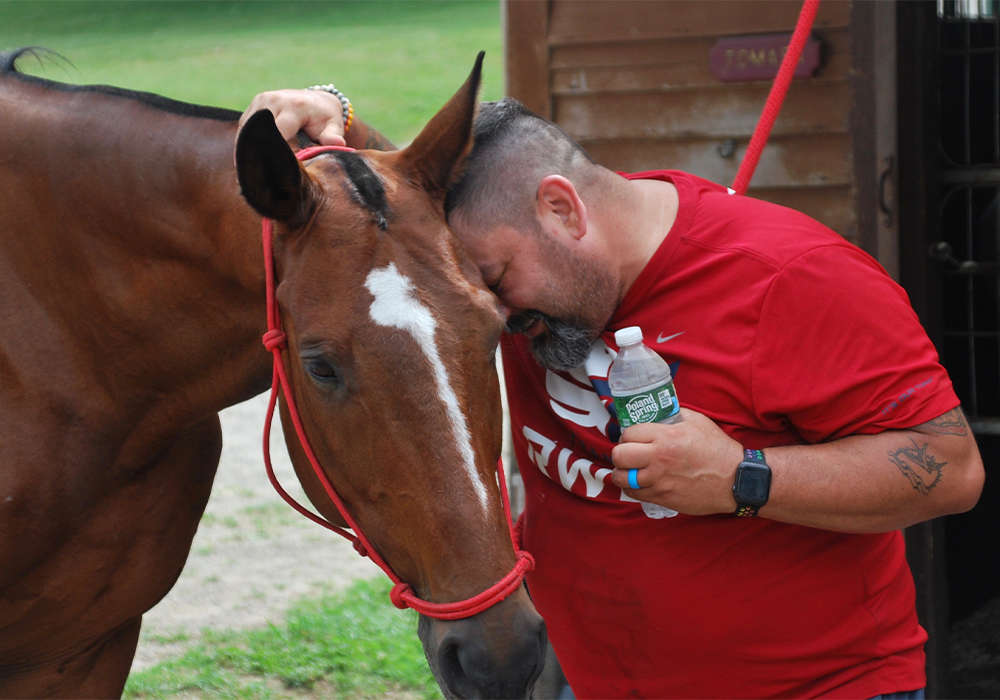 Leaving a lasting impression on certain participants, the experience has even inspired several to seek out equestrian facilities and polo clubs once they return home. “I’ve found that people who want to stay in touch often send me pictures of them riding,” Lussi said. “It’s incredible how the horses changed their life in one day!” "In one weekend a new polo fan was born," Captain Joel Silva confirmed. Mutually beneficial in more ways than one, Harvard Polo’s initiative has paved the way for many people’s lives to be impacted for the better through the therapeutic power of polo ponies.