GILLIAN JOHNSTON SHARES HER PASSION FOR BREEDING – AN ARTICLE BY CLICKPOLOUSA 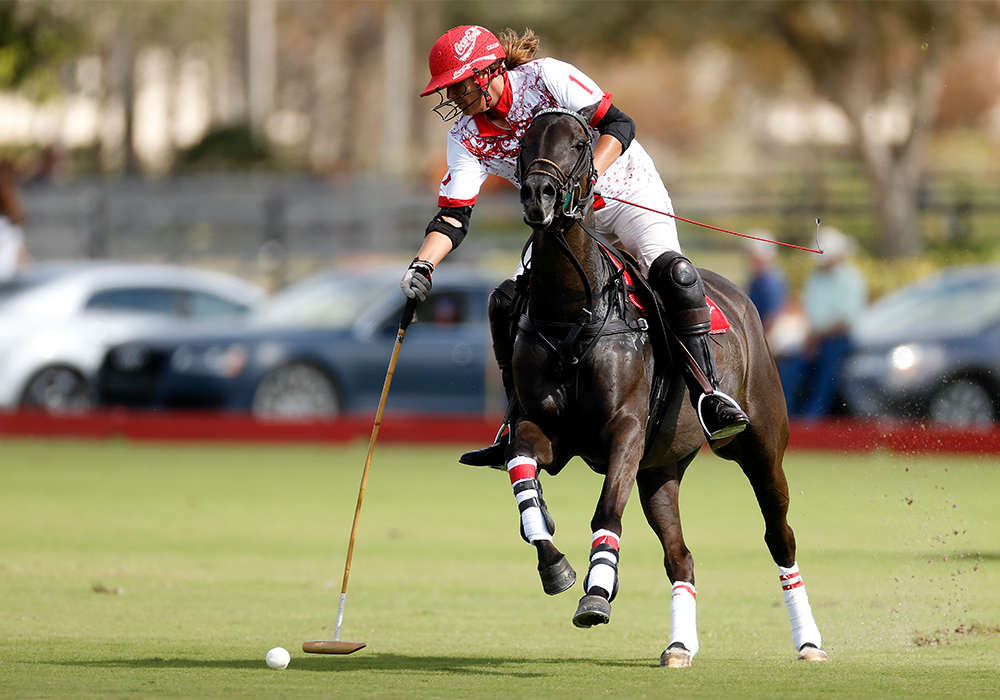 Coca-Cola's Gillian Johnston has been a mainstay in high-goal polo.

Gillian Johnston has been a cornerstone of American polo for several years now, and her family has played in many different tournaments across the country. Competing in mixed and women’s tournaments, Johnston is very active between Florida and Wyoming.

“Polo is a huge part of my life and has been enjoyed by many generations of my family,” Johnston shared. “I love polo, but I especially love the horses.” After competing in the GAUNTLET OF POLO®, Johnston returned west to her home base where she runs her breeding operation G String Polo Ponies. “I am in Wyoming for the summer getting ready for the upcoming season,” Johnston said. “Our club is at full capacity so it should be a very fun, competitive season." 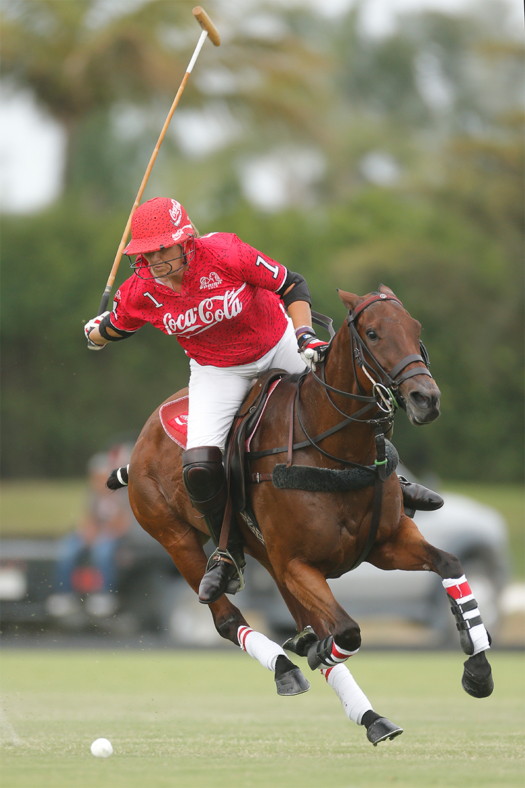 “Polo is a huge part of my life and has been enjoyed by many generations of my family,” Johnston shared. “I love polo, but I especially love the horses.” After competing in the GAUNTLET OF POLO®, Johnston returned west to her home base where she runs her breeding operation G String Polo Ponies. “I am in Wyoming for the summer getting ready for the upcoming season,” Johnston said. “Our club is at full capacity so it should be a very fun, competitive season."

Known for producing quality polo ponies, Johnston’s horses often win awards including most recently the 2021 International Polo Club Best American-Bred Horse of the U.S. Open Polo Championship®. “We have been breeding polo ponies since the 80s on our ranch Flying H in Big Horn, Wyoming,” Johnston said. “I took over the operation around 2006 and named it G String Polo Ponies.” 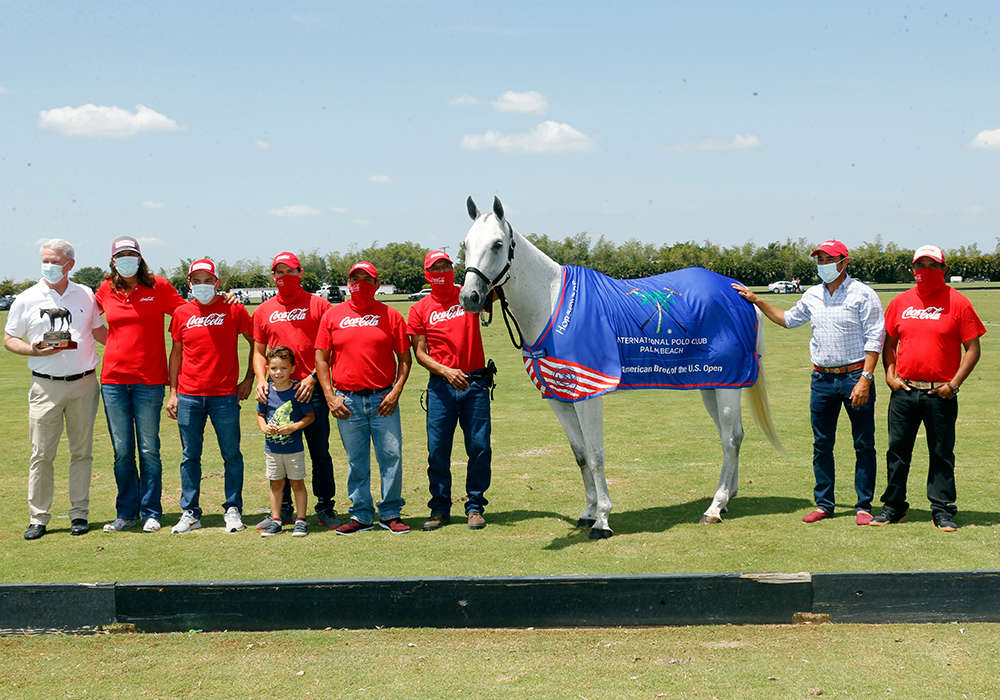 Perfecting the process over the years, Johnston explained the program each of her homebreds go through before making their debut on the polo field. “I run about 35 broodmares and choose which to cover each year hoping for between 12 and 15 babies,” Johnston said. “We try to keep the numbers small and manageable so that they all get the attention they need. My broodmare string consists of many older mares we bred in the past and a few other players have generously given me. I currently have four stallions: Pingo (Pinta x River Slaney) from Miguel Novillo Astrada, Meetmeathemint who is a strike horse I bought in the Thoroughbred sales, and two young playing stallions McDreamy (Beckon x Boeing) and Ghost Rider (Luthanza x Medallion).”

“The babies are born and raised in Wyoming and each of them will experience all aspects of working on the ranch while they are young,” Johnston revealed. “They do a lot of cow work which makes a very solid horse with a great mind. There are many people responsible for getting my horses onto the field. I send them as two-year-olds to Paul Van Dyke who takes care of them for a month and tames them. As three- and four-year olds, with many miles on them, they are introduced to polo with my head manager, Brendon Whittle, Christian Pessina and Murray Townsend. Together they start the young horses with stick and balling and then move on to the first few chukkers. From there they go to Sergio Villanueva and he takes them to Florida as five-year-olds where they play their first tournament polo which is slower and he prepares them to come to my barn." 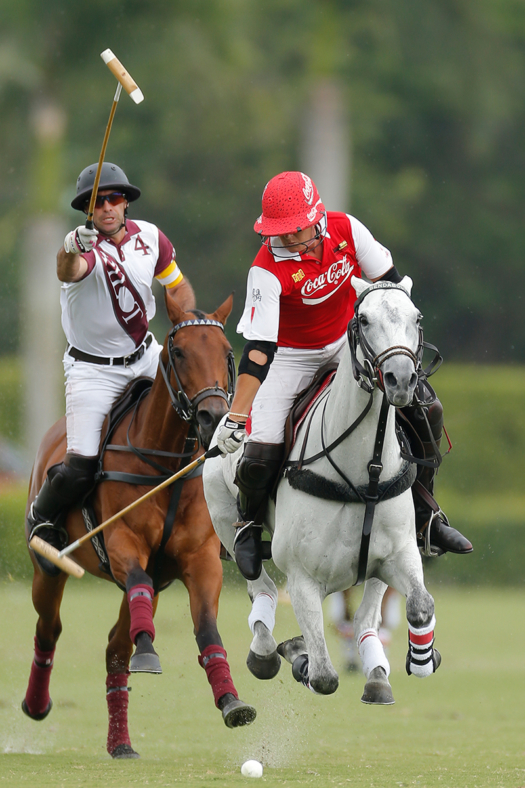 Coca-Cola's Gillian Johnston ahead of Pilot's Facundo Pieres in the GAUNTLET OF POLO®.

“During the summer of their sixth year, Miguel Novillo Astrada and Julian de Lusarreta play them in Wyoming at Flying H Ranch Polo Club,” Johnston continued. “After that they go to Florida and most are ready for some high-goal polo at that point in their training. We are proud that almost 90% of every group makes it through our program. They may not all play high-goal polo, but almost everyone will end up somewhere in polo. I keep some every year and also sell quite a few. They have a very good foundation and people always seem to like them because they are very quiet.”

Competing in the most prestigious USPA tournaments in the country, Johnston knows the quality of horses required to endure a lengthy high-goal season. “My string in Florida for the high and medium goal is almost entirely made of homebred horses,” Johnston revealed. “Some are third generation out of my dad’s old mares. I’ve also sold many horses to some top players and enjoy competing against them and a few have even made it to the Argentine Open. A great example is Fanta who is played by Nico Pieres.” 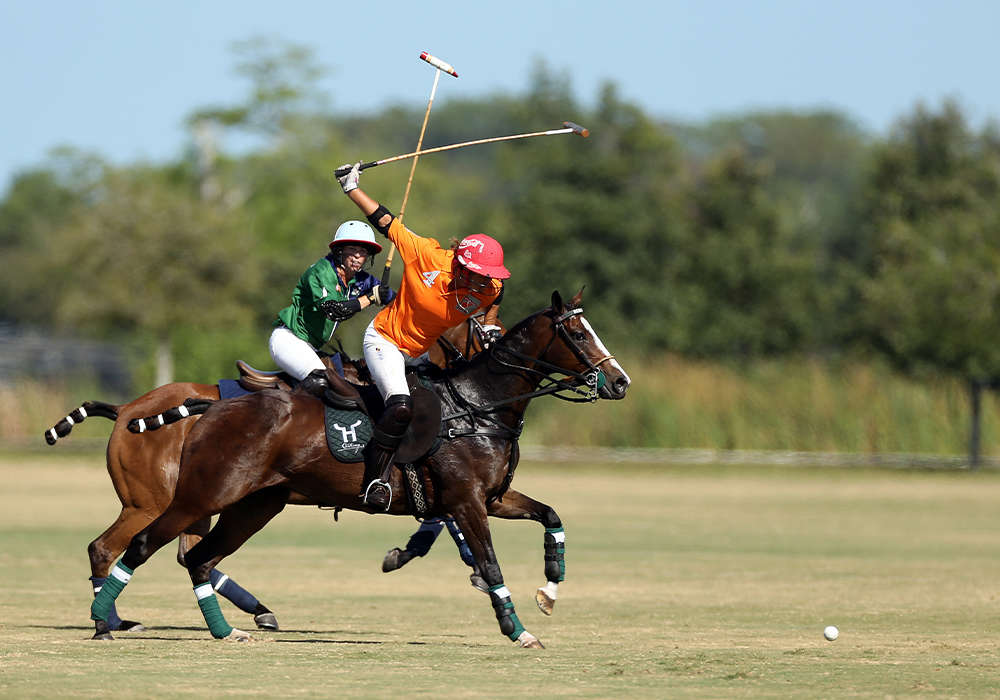 “The advantages of breeding in the United States are that as a player I have almost fully mounted myself on homebred horses,” Johnston continued. “I also have been with these horses from birth, so there are no surprises. When I get them, I know what they are and their compete history. However the disadvantage is definitely the cost! It is very expensive to raise horses in the United States. You definitely have to do it for the love of horses and not for profit. The horses are what I enjoy the most about the sport so I feel a lot of joy seeing them perform whether it’s with me or another player knowing they have come through our program.”

A fixture in the sport for many years, Johnston shared her thoughts on the health of American polo. “I believe polo in general in the United States is doing quite well,” Johnston said. “The summer clubs seem to be flourishing and I have seen many new faces coming into the sport in recent years. I also believe that youth polo is doing well and producing new players. Port Mayaca Polo Club [Okeechobee, Florida] did a great job this winter, organizing more competitive medium-goal tournaments, which had been missing in Florida for a number of years. That level of polo does a great job of attracting new people to the sport.”

All photos courtesy of ©David Lominska.