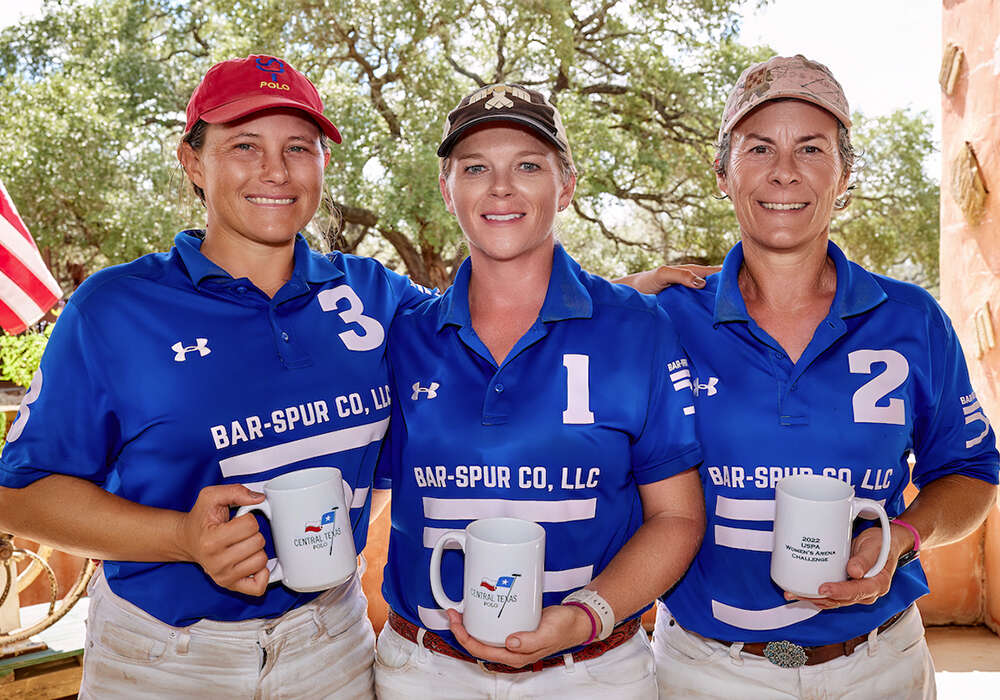 The Central Texas Polo Association (CTPA) hosted the Southwestern Circuit Women’s Arena Challenge the weekend of October 15-16 at the Texas Military Polo Club (Poteet, Texas) facility. The event was played in “The Best Little Grass Arena in Texas.” Three teams participated in the event, with Wendy Stover and Tiamo Hudspeth returning to defend their 2021 title. Played on a warm and beautiful weekend, the tournament showcased some of the best polo in the region in years.

“We knew it would come down to grittiness, as it often does in the arena”  – Tiamo Husdpeth

As there were only three teams, a modified round-robin format was used as well as continuous scorekeeping, which means each team played two chukkers in a round-robin fashion. At end of Saturday there was an overnight halftime with the second half finishing on Sunday. During the Friday night dinner, there was a draw to determine which two teams started tournament play. It was determined that Elite Motion and LeasePlan would play first, then Bar Spur would play the low scoring team from the first two chukkers. After the first day of play, Elite Motion led 6-4 over LeasePlan, Bar Spur led 6-3 over LeasePlan, and Bar Spur and Elite Motion remained in a 5-all deadlock. 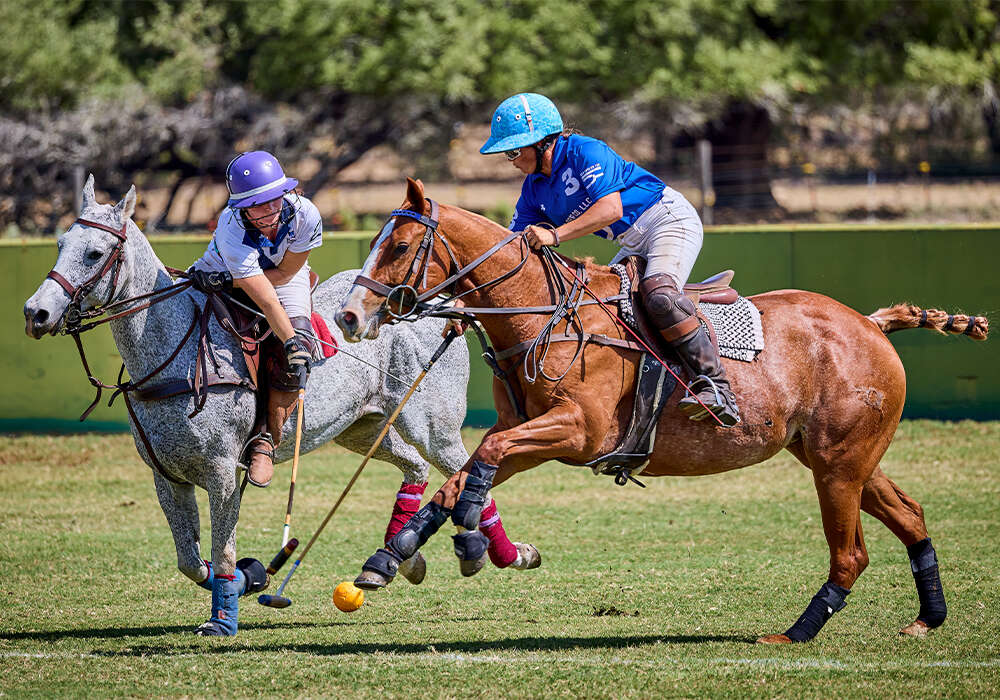 Next into the arena were Bar Spur and LeasePlan. Stover and Hudspeth combined forces for three goals while holding LeasePlan scoreless in the third chukker. The fourth chukker showcased an amazing display of talent from Hudspeth, who scored five goals in three-and-a-half minutes on her first horse of the chukker and then closed out the chukker with one more goal on her second horse. LeasePlan responded with goals from Yanskey and Rahlfs, but it was not enough to overtake the lead Bar Spur had created. 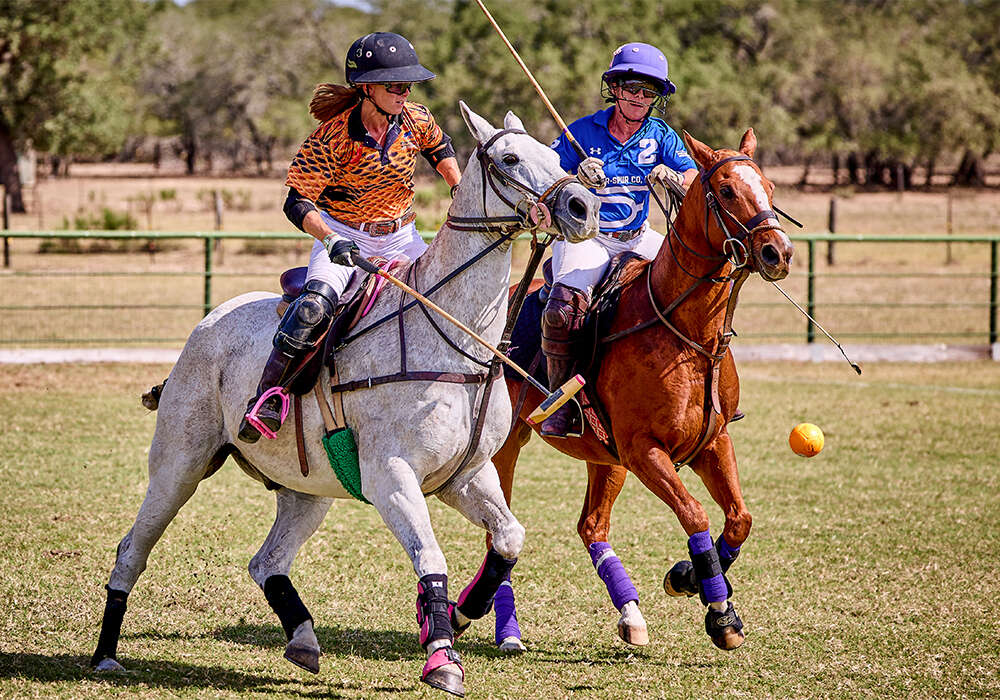 Noting her team’s awareness of both their own strengths and weaknesses and those in their opponents, Hudspeth shared, “There were definite strengths we were looking out for in the other teams, and we were aware of our weaknesses and tried to cover them up! We had great respect for the other teams and knew they were a threat. All of the teams were strong. We knew it would come down to grittiness, as it often does in the arena.”

The final two chukkers of the day served as the finale, as both Bar Spur and Elite Motion had 1-0 records and were tied at 5-all vying for the first-place trophies. Starting the scoring it was Elite Motion’s Massey, but Bar Spur’s Stover and Hudspeth were able to score from the field and draw a Penalty 1 to give their team a two-point lead at the end of the third chukker. In the fourth chukker, all the players were on point and playing great defense, with multiple saves in the goal mouth. A mistake by Bar Spur led to Elite Motion’s Massey converting a Penalty 2, but this was the only goal of the chukker for either team, allowing Bar Spur to hold tight for the 8-7 win.

For her impressive performance on both the offensive and defensive ends of the game, Audry Persano was awarded Most Valuable Player. Hudspeth praised her opponent, noting, “It was a close game and Audry and I really battled it out. I think Audry had an exceptional game. We were back and forth the whole time.” Persano was presented a custom George Wood mallet, which was donated by George Wood. Noting her appreciation for the award and recognition, Persano shared, “I really was honored to be named MVP. I think between a lot of the players there [and] the higher rated pros, it really could have been given to anyone. But something that helped me earn this recognition was my horses. They played really well and [were] all heart out there. My teammates [also] really helped me to play well because I could rely on them.” 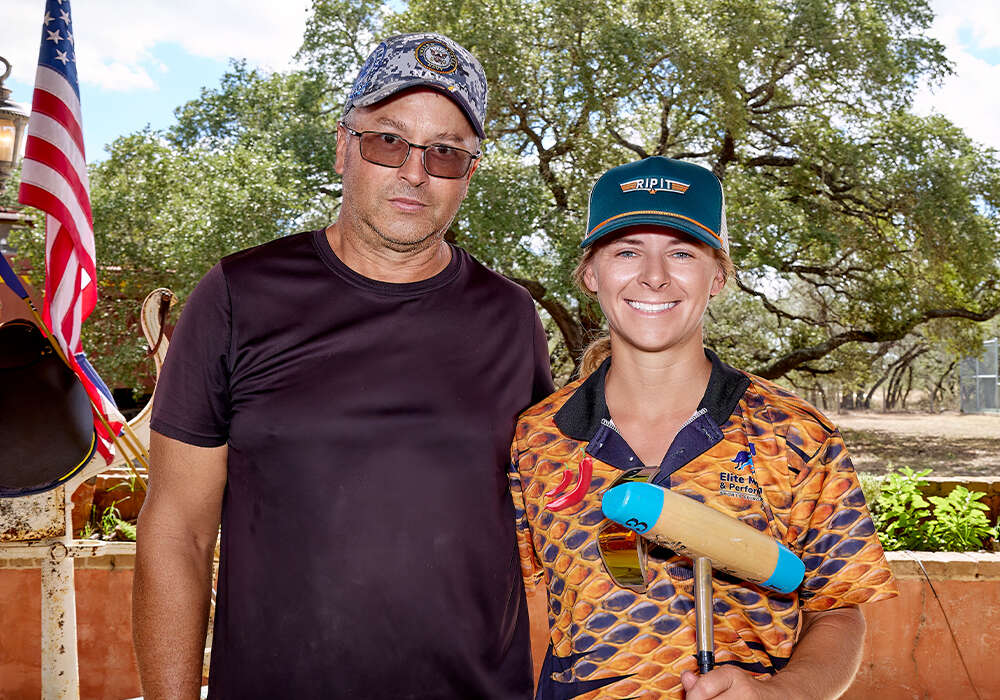 Most Valuable Player Audry Persano was presented with a custom George Wood mallet and presented by Karl Hilberg.

“I’iwi is a horse I trained and sold to Mark and Amanda Osburn during this same tournament in 2021. It was so special to get to play her along with another horse I had sold to Mark a few years back, Blueduck. [...] I can’t express how much it means to me for my horses to end up in a home like this family. They are so well cared for and played the same as the day they left my barn! It makes my heart smile.”  – Tiamo Hudspeth

Best Playing Pony honors were presented to I’iwi, played by Tiamo Hudspeth and owned by Amanda and Mark Osburn. A horse all too familiar to Hudspeth, she fawned, “I’iwi is a horse I trained and sold to Mark and Amanda Osburn during this same tournament in 2021. It was so special to get to play her along with another horse I had sold to Mark a few years back, Blueduck. Both horses are total machines in the arena and have so much heart. I’iwi really stands out for her quickness and lightness. She is incredibly handy, but also powerful. I can’t express how much it means to me for my horses to end up in a home like this family. They are so well cared for and played the same as the day they left my barn! It makes my heart smile.” A Tato’s polo bridle donated by Shawn Gibson was presented as the Best Playing Pony award. 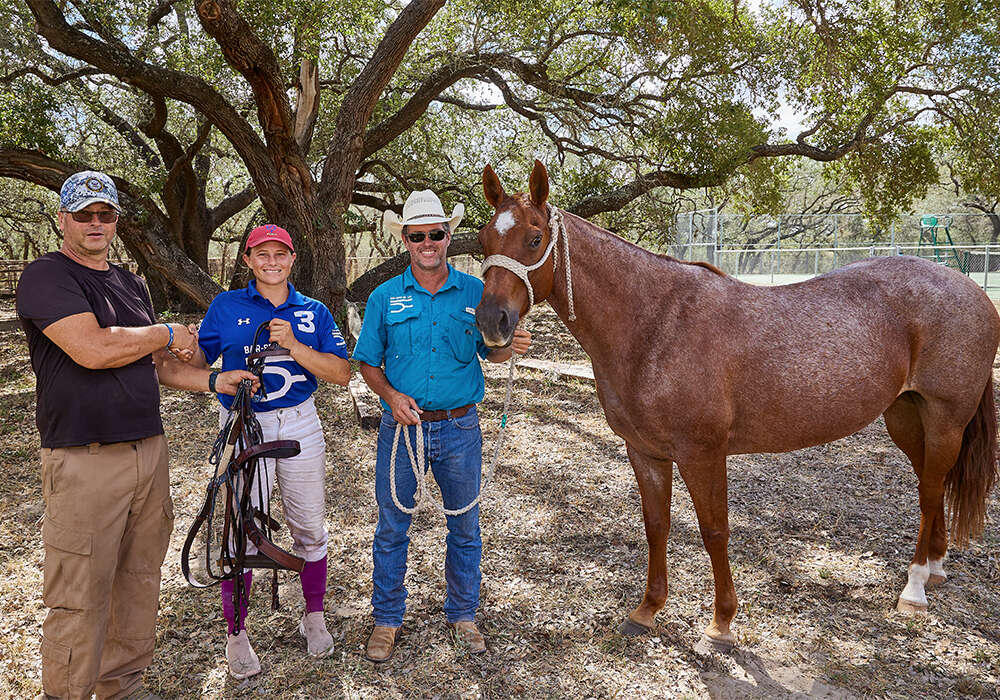 Exemplifying great sportsmanship throughout the weekend, Lisa Yanskey was the recipient of the Sportsmanship Award. She was presented a Tato’s polo saddle, donated by Shawn Gibson. Brought to joyful tears by this recognition, Yanskey shared, “The Sportsmanship Award actually made me tear up! When we lost the first game by one point, I knew my teammates were going to be down and I wanted them to know that I was so proud of how we played. We had to go back out and play our second game and I knew it would be tough. So, I just tried to let them know that I was proud and to really look at this as a learning experience. I guess that positive attitude got noticed.”

Taking a moment to appreciate the facility, Hudspeth shared, “I grew up in Maui, Hawaii, so I am very accustomed to playing on the grass and it’s my favorite. There are less divots or holes than arena, and the footing at Texas Military Polo Club LLC is super sandy underneath the grass, so your horses always have really good traction. It’s an awesome arena they have there.” On the opposite end of the spectrum, Persano had never played on a grass arena. She added, “I really enjoyed it. I’ve never played in a grass arena, but being on the grass made me feel like it was faster, the ball was never stuck, and also it really translated to playing zone polo. It was really cool. I enjoyed that arena and it was nicely kept.” 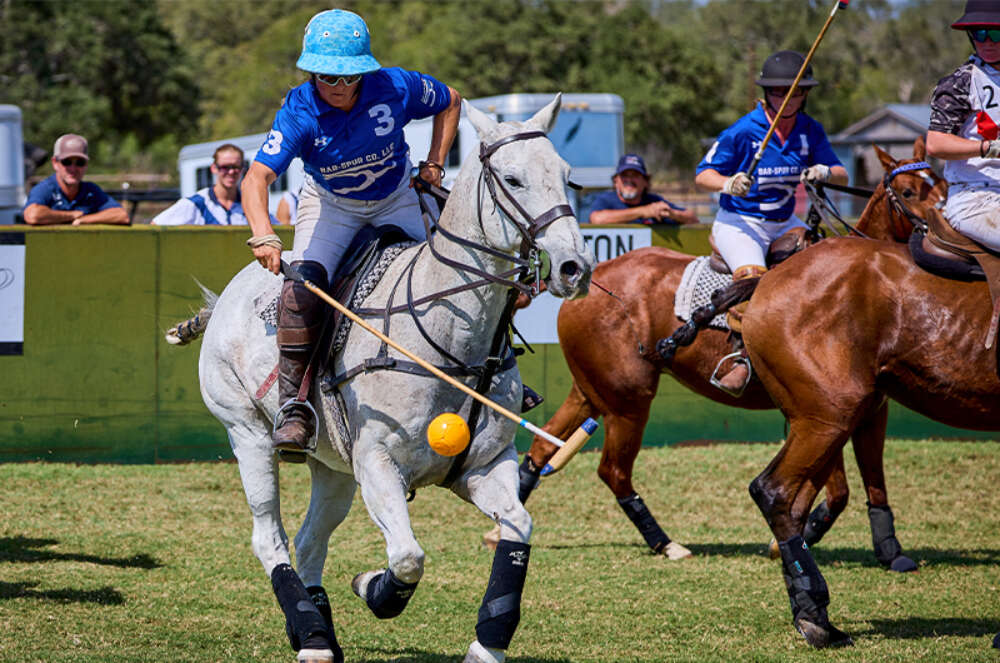 Hailing from Hawaii, Huspeth shared her appreciation of the traction and playability of the grass arena at Texas Military Polo Club.

Reflecting on the weekend overall, Hudspeth added, “The tournament was most definitely an enjoyable experience. This was my second year playing in it and I will definitely be back. They have wonderful prizes; it is well organized and a beautiful facility. Wendy and I won in 2021 and returned this year to win again! There is nothing more fun than winning with a dear friend.” Similarly, Persano noted, “I met a lot of new girls I hadn’t met before. I liked it because it seemed like a small community and that they all know each other, so it was very pleasant. The tournament host Karl Hilberg and the Texas Military Polo Club were just so great, and it was a very well hosted tournament. I had so much fun, and I hope I can be invited back next year. More people should come. I’m hoping to help a couple of teams get put together so it can be a bigger tournament next year because it was a blast.”

“There is nothing more fun than winning with a dear friend.”  – Tiamo Hudspeth

An event like this takes an army of supporters to make it successful, so the CTPA would like to thank Murrell Photography, EMT Rusty Wood, scorekeeper and third-man Jack Crea, umpires Robin Sanchez and Brady Williams, prize donors Shawn Gibson and George Wood Mallets, the USPA and event hosts Julie and Karl Hilberg for such a wonderful weekend!

*Tiamo Hudspeth and Audry Persano are is Team USPA alumni. Team USPA is a USPA program designed to enhance and grow the sport of polo in the United States by identifying young, talented American players and providing mentored training and playing opportunities leading to a pool of higher rated amateur and pro players and the resultant giveback to the sport of polo.

All photos courtesy of ©David Murrell.