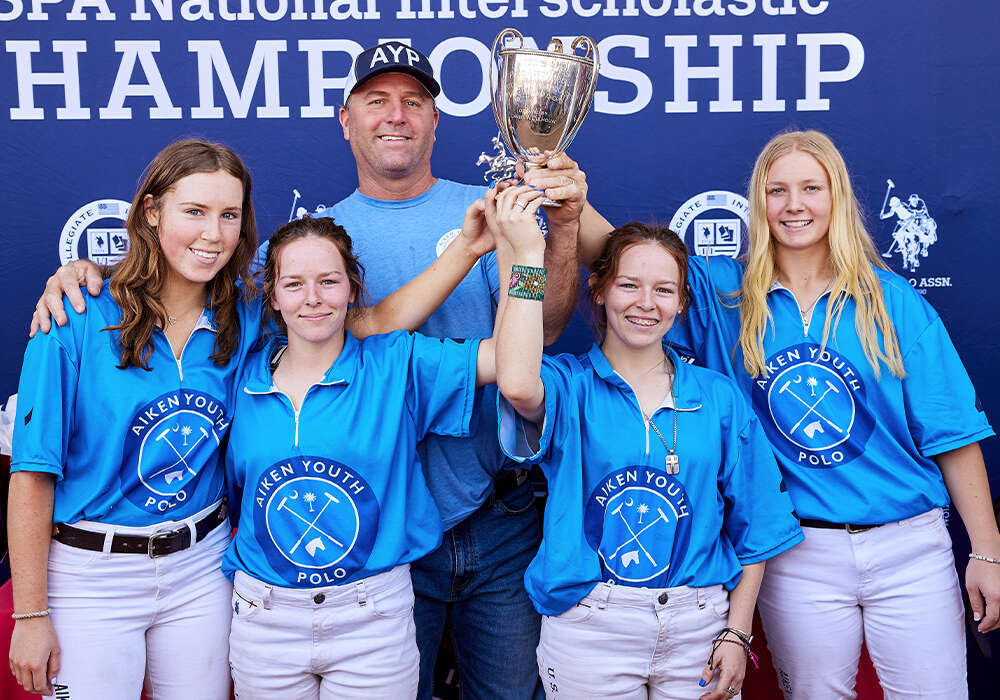 “I feel blessed to be able to coach and mentor these kids [...] I’ve had Summer, Reagan and Robyn in my program for the past five years when we first started Aiken Youth Polo. To see them mature as players and more importantly young women has been amazing.”

Emerging from a field of five competitive teams, Aiken dominated in their semifinal over Yale to secure a finalist position, while Maryland defeated Houston 14-10 to earn their tenth finals appearance. Displaying determination and urgency, Aiken got off to an early lead from Kneece and despite a push from Maryland, a six-goal run for Aiken in the final chukker sealed their championship repeat 16-10.

“This is what you have worked for. You know you have it in you, now go get it done and enjoy this moment.”  – Aiken Polo Club's Coach Tiger Kneece to his team moving into the final chukker

Following the graduation of Sophie Grant* in 2021, Aiken started their search for a new addition to the close-knit team. Kneece stated, “I’ve been friends with Madison and Brianna Jordan and played with them a lot. I thought Brianna [Jordan] would be a great addition to the team, and Madison [Jordan] a great addition to the Open team. The team chemistry was great. Brianna [Jordan] fit in with the twins [Reagan and Robyn Leitner] and I so well. We are all like family now. I can’t wait to play with her more and watch us improve together.” 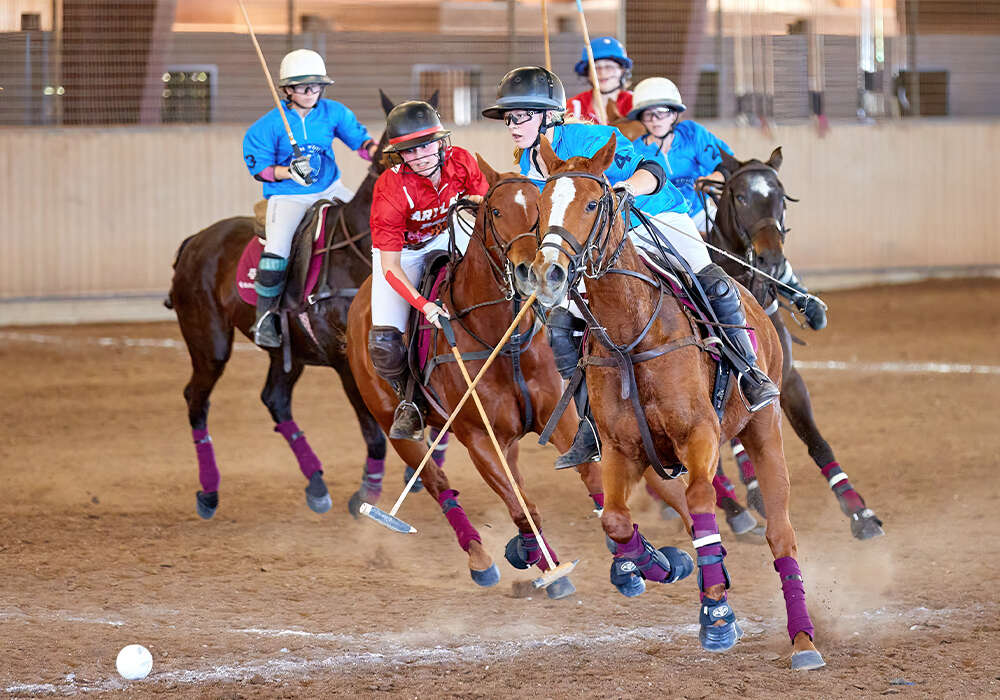 With a revised team in place, Aiken was also facing the reality of losing high school seniors Reagan and Robyn Leitner after the championship final match. Playing with Kneece in Aiken Youth Polo for five years, the sisters had one last bid as a unified team to stamp their legacy on interscholastic polo.

Knowing this would be their final chance to lift the trophy as teammates, Aiken came out confidently on their home string, with high school junior Kneece scoring the first goal without hesitation. Maryland’s Beard was quick to respond with back-to-back goals, from the field and penalty line to give Maryland a narrow edge. Aiken tied things up after a melee in front of the goal mouth and a Penalty 1 automatic goal. Eager to take back the lead, two more goals from Aiken doubled up the score 4-2 moving into the second chukker. 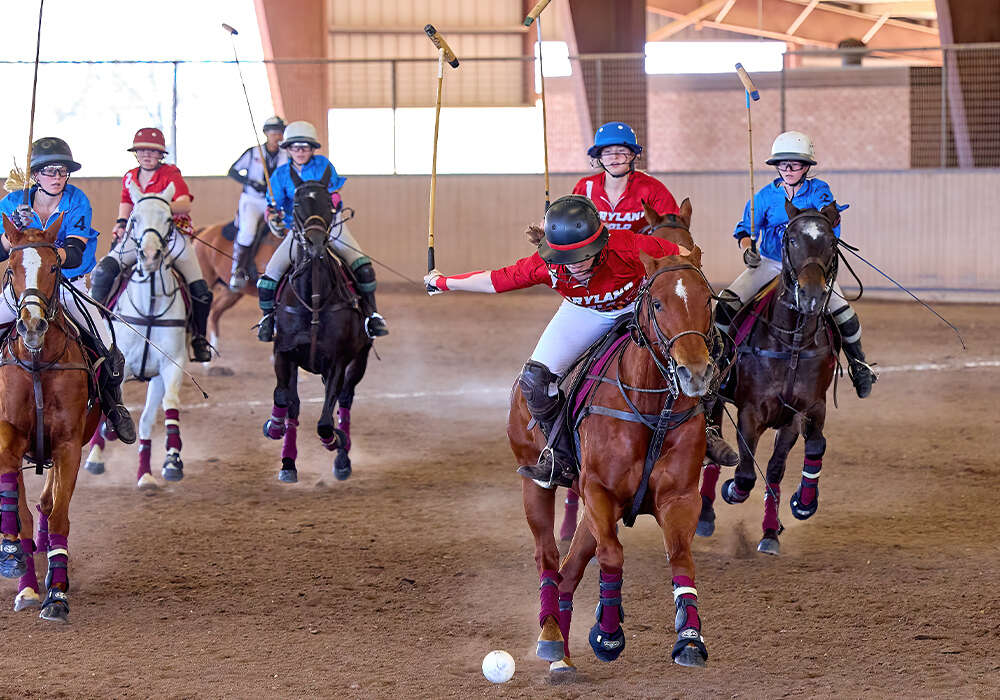 Maryland's Kylie Beard on a breakaway.

Making the trip from Aiken, South Carolina, to Brookshire, Texas, with their home string provided the Aiken Polo Club team with a leg-up on the competition. “It was really nice having our own horses because we knew there would be at least two chukkers that we could rely on them,” said Robyn Leitner. “I think bringing them gave us an advantage because we all knew how our horses played, and how to make the most of them." She continued, "It took us two days to get to Houston [Texas] and both days we spent about eight hours on the road! Travelling together was a great bonding moment for our team, as we were able to go out for dinner and enjoy the trip together.” 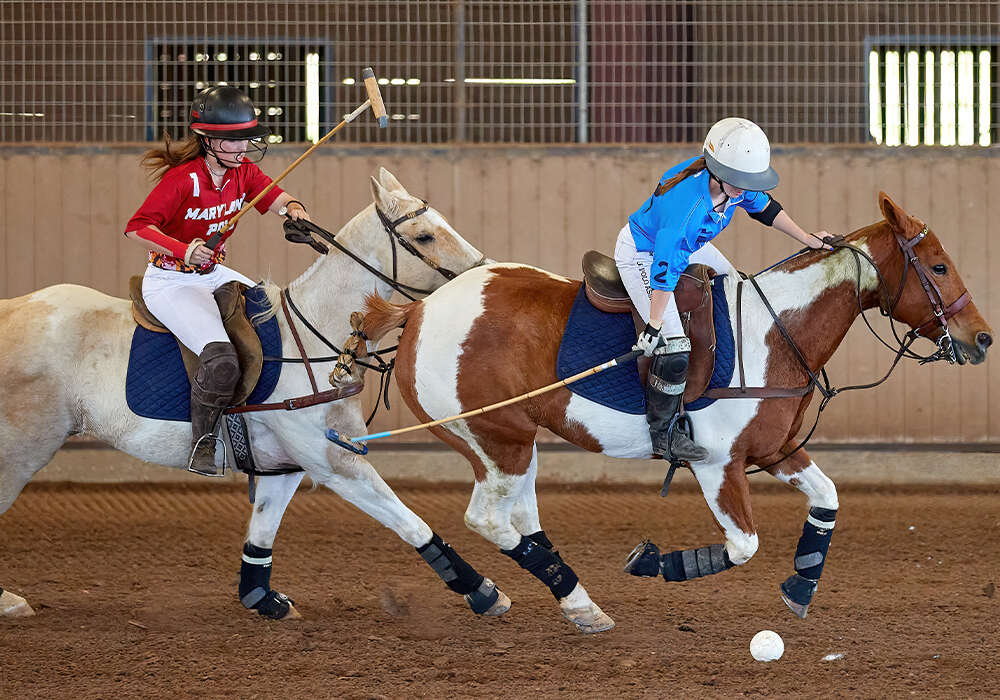 Kneece wasted no time in the second chukker, this time riding Texas A&M (College Station, Texas) ponies, who were serving as Maryland’s string for the weekend. After three consecutive goals from Kneece, Maryland’s Blevins and Peterson focused on defense, thwarting Kneece long enough to allow space for two Maryland goals. Ending the first half, Aiken’s Brianna Jordan sunk her first goal of the game, taking the ball coast-to-coast to end the chukker in favor of Aiken 8-4.

Taking time to reflect on Aiken’s first half strengths, Reagan Leitner expressed, “Maryland is very strong and talented. We knew going into it that the girls on this team were aggressive players that could ride well. We wanted to start the first chukker hot and be ready to strike hard and fast, scoring as many goals as we could. We planned to play super open and control the pace of the game. [We knew] they would make their penalties, so we couldn’t foul!”

Re-invigorated after productive halftime strategizing, Maryland came into the third chukker firing on all cylinders. Peterson started things off beautifully with the first two-pointer of the day to chip away at the four-goal deficit. Tying the game once again, Beard followed suit by capitalizing on back-to-back penalty conversions. Aiken sprang back into action with Robyn Leitner sinking a Penalty 2, while Jordan added her second from the field to end the chukker ahead 10-8. 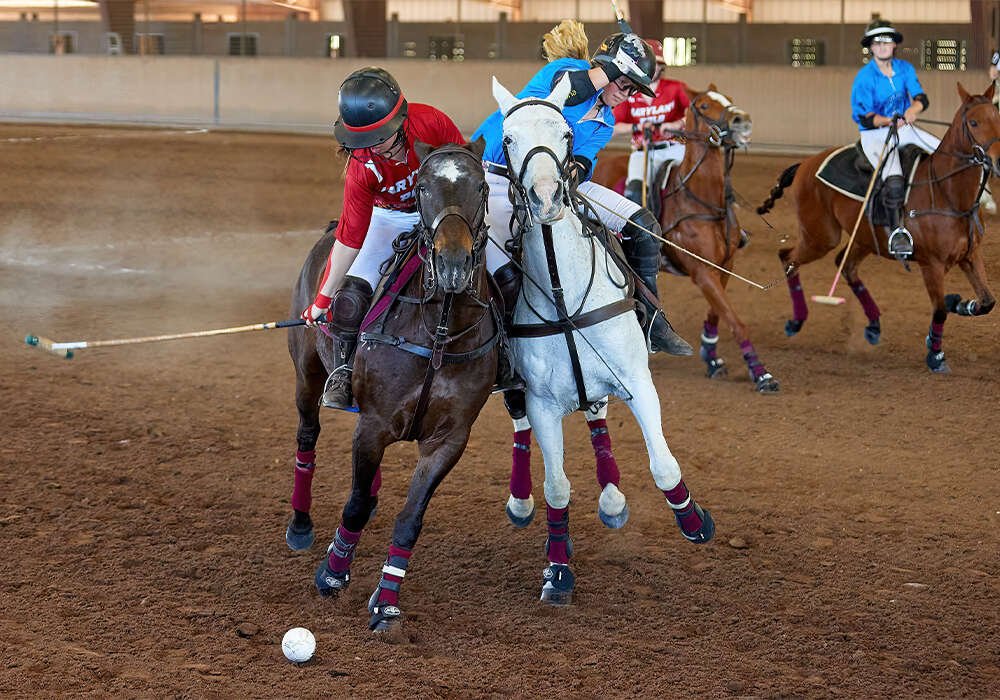 Prepared for the final push to the finish line, Coach Tiger Kneece gave daughter Summer and the Leitner sisters invaluable advice, “this is what you guys have worked for. You know you have it in you, now go get it done and enjoy this moment.” Hungry to defend their title, Aiken tapped into an offensive flow, reaching another level to outscore their opponents 6-2, with all Aiken players contributing.

Maryland’s Beard started off the chukker with a penalty conversion to come within one, but Kneece knocked in the second two-pointer of the day, to start off a six-goal Aiken streak. Peterson attempted to re-energize the Maryland effort with a final field goal, but as the clock wound down, Aiken’s powerful scoring cemented the win with a decisive 16-10 victory. 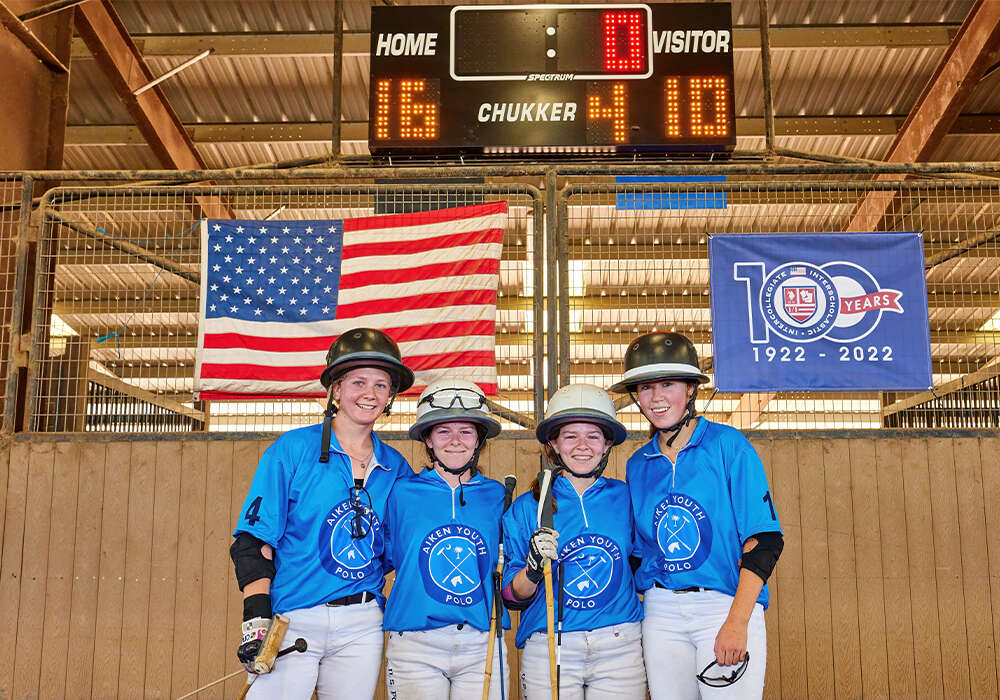 Contributing nine of her team’s 16 total goals, Kneece reflected on her team’s triumphant victory, “I feel that my whole team and I played very well through the whole game but the last chukker was definitely our best.” Kneece continued, “it was the last chukker I had with Reagan [Leitner] and Robyn [Leitner], so we went out there and gave it everything we had. Texas A&M also provided the amazing horses that we had for the fourth chukker.”

Jordan, fresh of her first National’s win and Aiken’s newest member shared, “playing for Aiken there is a strong bond between my teamamtes and within the entire program. Winning alongside Reagan [Leitner], Robyn [Leitner], and Summer [Kneece] is an unforgettable experience.” Rotating positions with the twins throughout the final, Jordan elaborated, “I wanted to let the Leitner twins play more because it is their senior year and they helped build the first Aiken Youth Polo team. Our usual lineup has each of us playing three chukkers but I wanted to give up my third chukker, since it was the Leitner’s final game in interscholastic polo.” 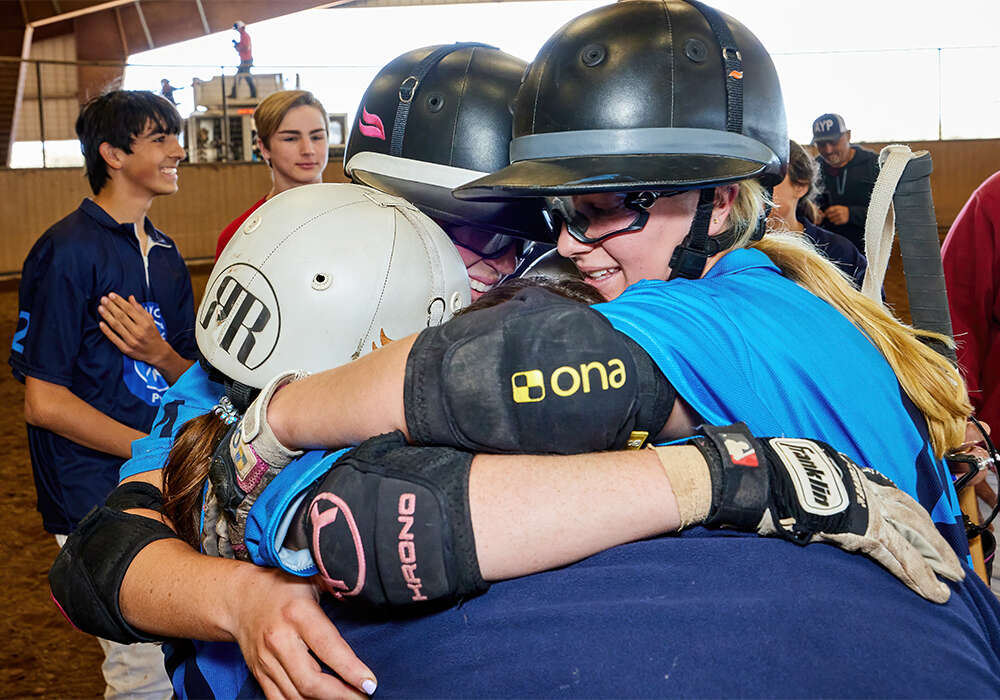 Completing their final interscholastic challenge as two-time champions, both Leitner’s reflected on their time in the program. “Playing in the finals for my last I/I game was such an honor! I’m so thankful for this opportunity and to have played with the hard-working team who helped earn the trophy,” Reagan said.

“It was amazing to be able to finish my last interscholastic game with my sister and such amazing friends,” noted Robyn. “I think we all cried when the game ended, we huddled together and hugged it out. Winning two years in a row was really a bonus, I didn’t really think about it at first, we just took it one game at a time. Looking back, I’m so thankful for amazing teammates that encouraged and worked for one another!”

“It was amazing to be able to finish my last interscholastic game with my sister and such amazing friends. I’m so thankful for teammates that encouraged and worked for one another!”  – Robyn Leitner

Reflective on the growth and experience of his talented players, coach Kneece, stated, “I feel blessed to be able to coach and mentor these kids. Winning the National Championship was just an added bonus. I’ve had Summer [Kneece], Reagan [Leitner] and Robyn [Leitner] in my program for the past five years when we first started Aiken Youth Polo. To see them mature as players and more importantly young women has been amazing.”

Maryland’s Beard also noted her appreciation sharing, “we got the opportunity of a lifetime being able to play amazing horses and hang out with people that have the passion and love for the sport that we have.” A team full of up-and-coming players, don’t be surprised if you see Maryland again next year vying for the championship. 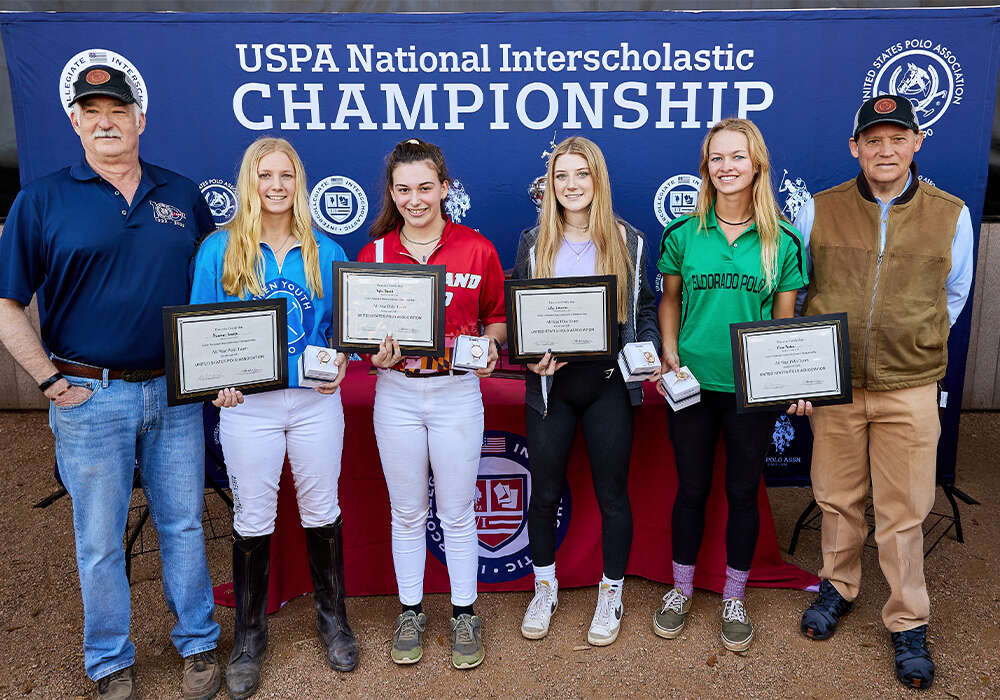 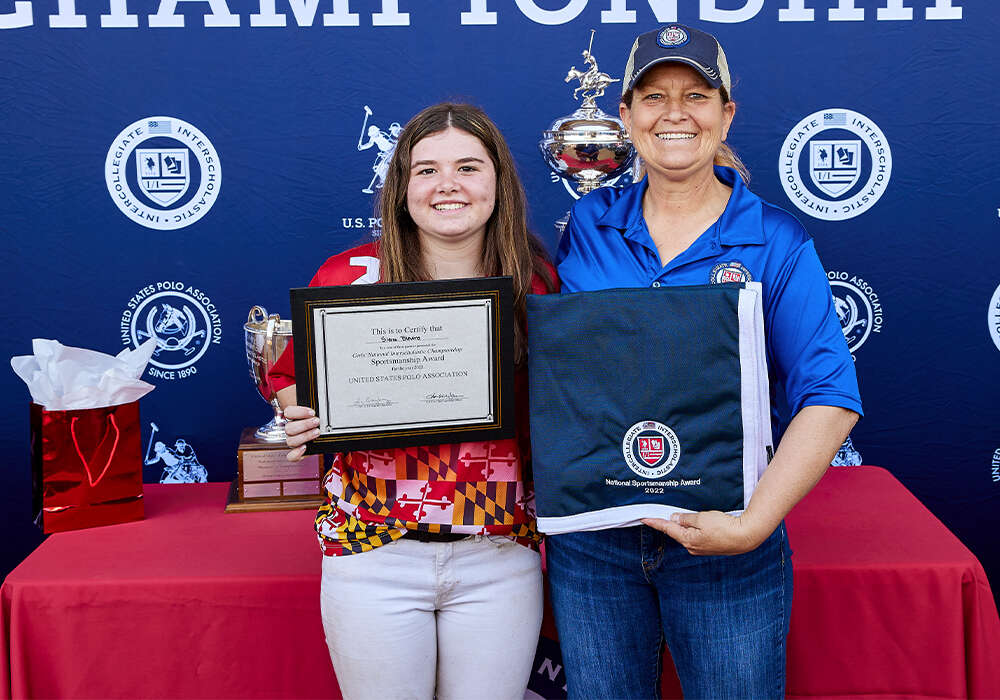 In one final celebration, the Aiken girls grasped each other tight and jumped off the infamous good luck dock next to Brookshire Polo Club. Bright-eyed about her polo future Robyn expressed her plans and dreams, “I will be playing low goal and women’s high goal in Aiken. In the future I want to enter many high-goal women’s tournaments across America, and I would love to compete one day in the U.S. Open Women’s Polo Championship®!”

The future for the Aiken Youth Polo program is also limitless, with a winning reputation and strong mentorship from Coach Kneece, Aiken’s newest additions are sure to be up to the challenge. Already stacked with their newest number one fans, Robyn added, “I will continue to cheer on and support Aiken Youth Polo and wish them the best!” 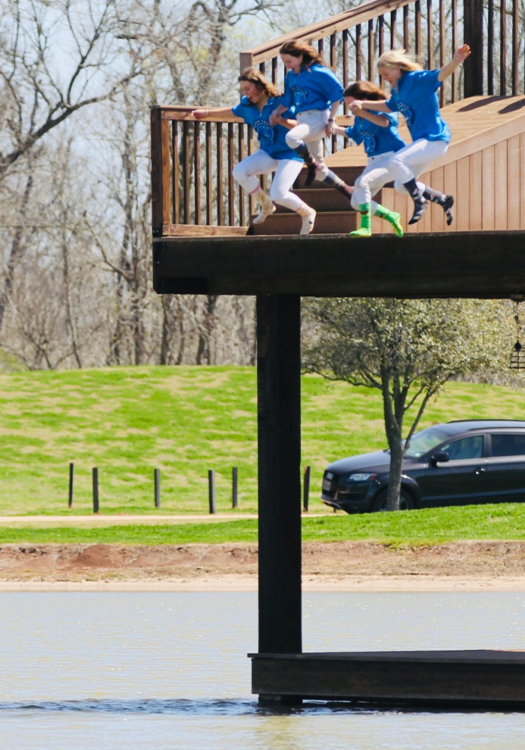 *Sophie Grant is an Active Team USPA Member. Team USPA is a USPA program designed to enhance and grow the sport of polo in the United States by identifying young, talented American players and providing mentored training and playing opportunities leading to a pool of higher rated amateur and pro players and the resultant giveback to the sport of polo.

All photos courtesy of ©David Murrell.