A NEW CHAMPION TO BE CROWNED IN THE U.S. OPEN POLO CHAMPIONSHIP® 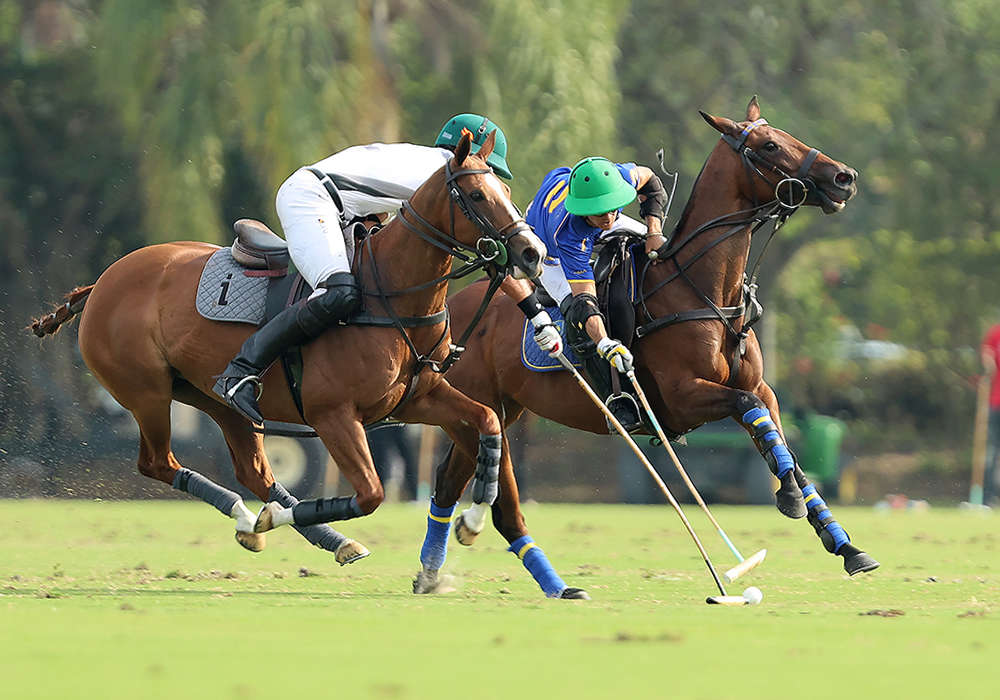 The first semifinal was decided in open play where Scone displayed a proficient defense that stifled Pilot’s 10-goal duo of Facundo and Gonzalito Pieres, limiting them to zero field goals over the first four chukkers. Generating 27 shots at goal, Scone dominated possession and remained organized throughout the match, preventing any significant counter attacks from Pilot. Despite finishing a perfect five for five from the penalty line, Pilot was outscored 10-1 from the field up until the final chukker, resulting in the impressive 14-10 victory in favor of Scone.

On the opening play of the game, Adolfo Cambiaso won the throw-in and scored from distance for Scone to set the early tone in the game. Pilot’s Facundo Pieres provided a brief response on a Penalty 4 conversion, but the remainder of the first chukker belonged to Scone as they continually pressured the Pilot defense with a determined attack that received three fouls. Gonzalez converted both opportunities from the penalty line while adding a goal from the field, leaving Pilot facing an early 4-1 deficit.

Missing all 10 of their shot attempts in the first half, Pilot struggled to match the offense of Scone, but stayed within reach on three penalty conversions from Facundo Pieres. Poroto Cambiaso added his name to the scoresheet before the end of the half to give Scone the 6-3 advantage.

A decisive fourth chukker changed the game as Pilot continued to go scoreless from the field, leaving Scone to build on their lead. An exceptional ride-off from Gonzalez set up Cambiaso as part of a three-goal chukker for Scone. Trying relentlessly throughout the game to score from the field, Pilot finally broke through in the fifth chukker when Magrini scored on Pilot’s twelfth shot attempt.

However, the day belonged to Scone as Poroto Cambiaso stepped up in the late stages of the game, scoring back-to-back goals to leave Pilot with a nearly insurmountable seven-goal deficit entering the final chukker. Despite the best efforts of Facundo and Gonzalito Pieres, who combined for four goals and four assists in the sixth chukker, Scone completed the impressive 14-10 victory to reach their third consecutive final in the GAUNTLET OF POLO®.

The second semifinal produced a comeback to remember after Park Place entered the final chukker down four goals and proceeded to score five consecutive goals, including the game-winning goal from Coppola inside the final minute to capture the spectacular victory. Accurate five for six penalty shooting from Ulloa, along with efficient 64% shooting from the field for Park Place helped them overcome the eight-goal performance from Polito Pieres. La Indiana used the pass exceptionally well throughout the game, collecting eight assists on 11 field goals, but the game was decided in the final moments with Park Place’s persistence leading them into the final with the 14-13 victory.

La Indiana's Jeff Hall swinging through a ball out of the reach of Park Place's Matt Coppola. ©David Lominska

In the first minute of the game, Britos scored near identical runs, winning the throw-in and racing to goal on a breakaway to give Park Place the 2-0 lead before 60 seconds had ticked off the clock. Controlling possession on the third throw-in, La Indiana reset and quickly brought the game even at 2-all after consecutive goals from Pieres erased the rapid start from Park Place. Turning to their defense, Park Place limited La Indiana to just one more goal through the end of the second chukker and built a two-goal lead in a complete team effort that resulted in contributions from all four players. Before the end of the second chukker, Hall took a mallet to the chin, bloodying his jersey but he bravely carried on and was instrumental in La Indiana’s surge to end the half. Scoring five goals in a dominant third chukker, La Indiana found both Escobar and Bickford at the front of the game, with the duo scoring two goals each to give La Indiana their first lead at 8-6.

Building off their momentum from the end of the first half, La Indiana controlled possession to begin the final three chukkers and leave Park Place in their defensive half. Tournament scoring leader Polito Pieres pushed his team forward with consecutive goals that left Park Place trailing by four. Withstanding seven shot attempts from La Indiana in the fifth chukker, a determined Park Place team remained behind by four entering the final seven minutes. Wasting little time, Borodin received a foul that led to a Penalty 2 conversion for Ulloa, which he followed up with a field goal just minutes later to bring Park Place within two. As time began to tick down, Ulloa converted a second Penalty 2, leaving Park Place in desperate need of a tying goal.

Winning the throw-in, Britos fought through the pressure of La Indiana’s defense and ran the ball through the goal, pumping his fists as the game was tied at 13-all. However, Park Place pushed for the incredible victory on the following play. Winning the ball out the back of the throw-in, Britos left the ball for Ulloa and a long pass found Coppola in front of goal. Just as he did two years ago in the semifinal with Las Monjitas, Coppola sent the ball through the goal, scoring the game-winning goal as a last run from La Indiana was stopped and Park Place celebrated the memorable 14-13 triumph.

*Nico Escobar, Peke Gonzalez and Kristos Magrini are Active Team USPA Members. Matt Coppola is a Graduating Team USPA Member. Team USPA is a USPA program designed to enhance and grow the sport of polo in the United States by identifying young, talented American players and providing mentored training and playing opportunities leading to a pool of higher rated amateur and pro players and the resultant giveback to the sport of polo.