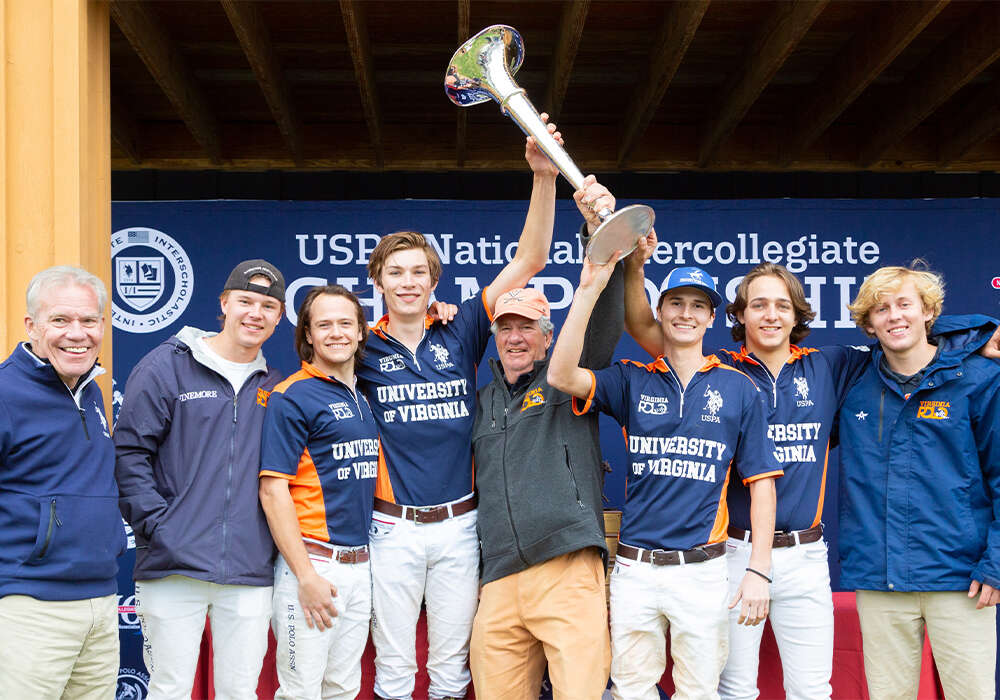 The conclusion to an electric week of National Intercollegiate Championship play at Virginia Polo Inc. (Charlottesville, Virginia) featured the men’s final with the University of Virginia (Jack McLean, Parker Pearce, Brennan Wells) seeking a double victory on home soil after the women’s team captured the victory just minutes earlier. Their opponents, the University of North Texas (Vance Miller III, John Dencker, Vaughn Miller Jr.), entered the final riding the high of a hard-fought semifinal win against Texas A&M under the lights of the outdoor arena, that was tirelessly prepared to ensure the best conditions for the highly anticipated finale. 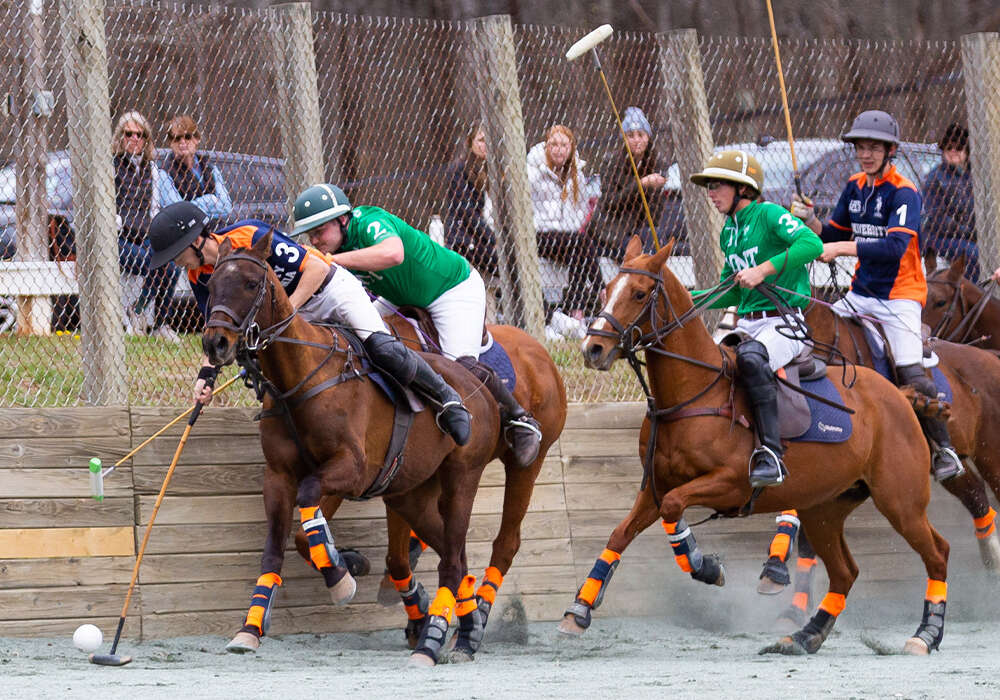 UVA's Brennan Wells carries the ball along the boards as UNT's John Dencker reaches for the hook.

After two years of COVID cancellations, the Men’s National Intercollegiate Championship was up for grabs for the first time since 2019 and for UVA, the long-standing chemistry between their three players was evident as they had one final chance playing together to claim the most prestigious title in intercollegiate polo. “We've played together for so long. I first played with Jack when I was about 11 years old. It’s been a decade with Jack and maybe eight years with Parker. We have had a lot of experience together,” shared Brennan Wells, who along with McLean, entered the final game of his fourth and final year. 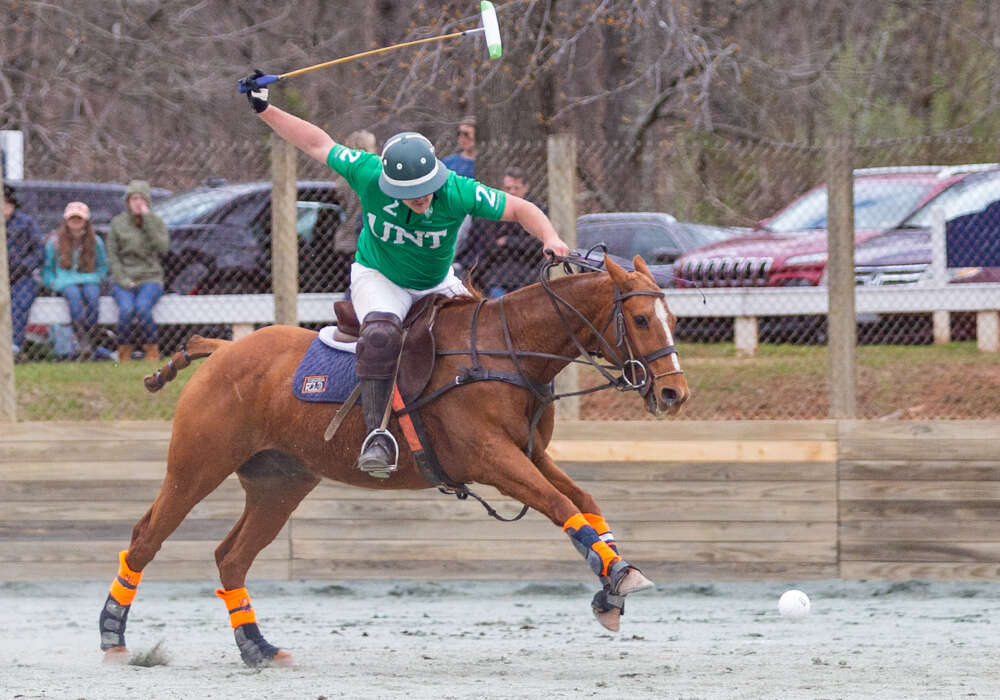 On the other side, the youthful, energetic UNT team featured brothers Vance and Vaughn Miller Jr., along with John Dencker, who joined the team after a successful interscholastic stint with Gardnertown Polo Club. All three returning next year, the trio displayed fight and grit in a triumphant semifinal victory against Texas A&M, showcasing a determined style of play that set up an intriguing final on Saturday, April 9. “We haven't played UNT this season but we knew they are a very tough team… All very talented players and we have a lot of respect for them,” mentioned Wells. Tied at the half with identical stats from both open play and the penalty line, halftime allowed UVA to refocus and play their game. “We weren’t playing how we normally do. We weren’t passing to each other. We were just focused on the ball and running all over the place. When we slowed it down and started thinking about it and making plays it felt like every goal we scored in the second half, every man touched the ball.” said Pearce. Exploding with four goals in the fourth chukker, UVA never looked back and played cohesive team polo to capture the coveted Men’s National Intercollegiate Championship title 13-7, joining the UVA women with a double-victory on home turf. 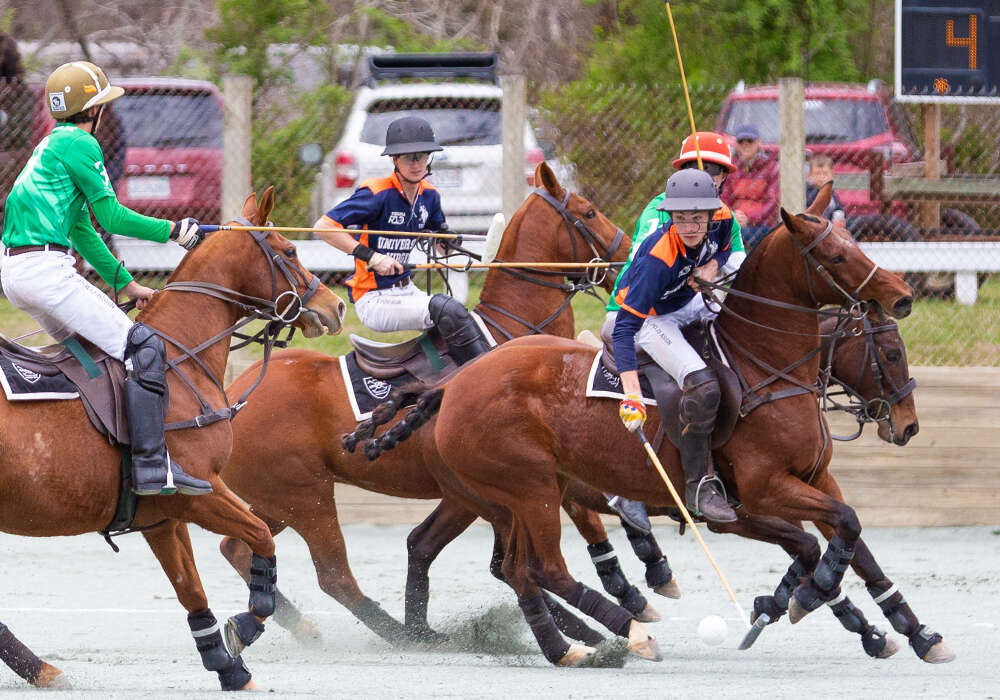 UVA's Jack McLean turns the ball down the arena.

Playing in the larger outdoor arena for both the semifinals and final, UVA utilized their knowledge of the different style that comes from playing on the bigger surface. “The outdoor arena is a huge change but that’s where we love to play,” shared Parker Pearce. “We grew up playing in a little, tiny arena and we love that too but it’s a different game.” Despite there being more space, UNT quickly asserted their quick, physical style of play that resulted in a low-scoring start to the match. A penalty conversion for Wells provided the only offense in the opening five minutes, leaving the score 1-0 in favor of UVA at the conclusion of the first chukker.

After two more minutes of scoreless play, McLean worked the ball down the boards on the nearside where he was followed by Wells, who tapped the ball into the goal for a 2-0 lead. Just a minute later, Wells returned the favor, sending a nearside necksot to goal where McLean knocked it in, extending their team’s lead to three. “We’re a finesse team. Something that we practice are fast transitions and moving the ball quickly from one to another,” said Wells as UVA was finding their footing with time running out in the second chukker. Threatening another goal, a Wells shot was blocked by Vaughn Miller Jr. who took the ball the length of the arena for an incredible solo effort to exit the second chukker trailing 3-1.

Bumping and battling for every loose ball, the competitive first half concluded with a valiant effort from UNT, as they held the prolific UVA offense scoreless. Winning a play in the corner, Vance Miller joined brother Vaughn on the scoresheet with his first goal of the day, and finding some momentum, UNT continued to drive forward. Receiving a Penalty 2, Vaughn Miller Jr. calmly sent the ball through the goal, sending the teams into halftime deadlocked 3-all.

UVA showcased a revitalized attack exiting the break. “We weren’t as nervous after halftime and we just played simple. We started communicating a lot more. I think we really just calmed down,” shared Wells. Wasting little time, UVA received a Penalty 1 and quickly followed with a Penalty 2 conversion to hold a 5-3 advantage. Pressuring the UNT defense, effective team play for UVA helped extend the lead to three after McLean hit a neckshot into goal. Completing the dominant chukker, Wells converted another Penalty 2, giving UVA a commanding 8-4 lead.

With two chukkers remaining, UVA held the title in their sights and displayed a stringent defense that prevented UNT from closing the gap. “Our game plan was to eliminate Vaughn as much as we could and make plays considering where he was on the field,” said McLean, as UVA held UNT off the scoreboard in a crucial fifth chukker. Tournament scoring leader Brennan Wells continued to produce from the penalty line, adding two more conversions to his total—leaving UNT facing a six-goal deficit. Scoring two goals early in the sixth chukker, Wells and UVA were left just steps from victory and despite an inspired effort from UNT’s brother duo of Vaughn and Vance Miller who combined for three goals in the final moments of the game, UVA celebrated the 13-7 triumph.

Celebrating the 100-year anniversary of Intercollegiate polo, UVA’s Parker Pearce had a unique connection with his grandfather playing on the inaugural 1922 winning Princeton team. “I can’t even believe it was that long ago that this started. It’s amazing to watch history repeat itself.” The only non-fourth year in the starting line-up, Pearce cherished the opportunity to play one final game alongside Wells and McLean. “What really means the world to me is winning it with my teammates that I have played with my entire life. I knew we would get it done eventually and got robbed of a couple of years, but we made it count when we needed to.” 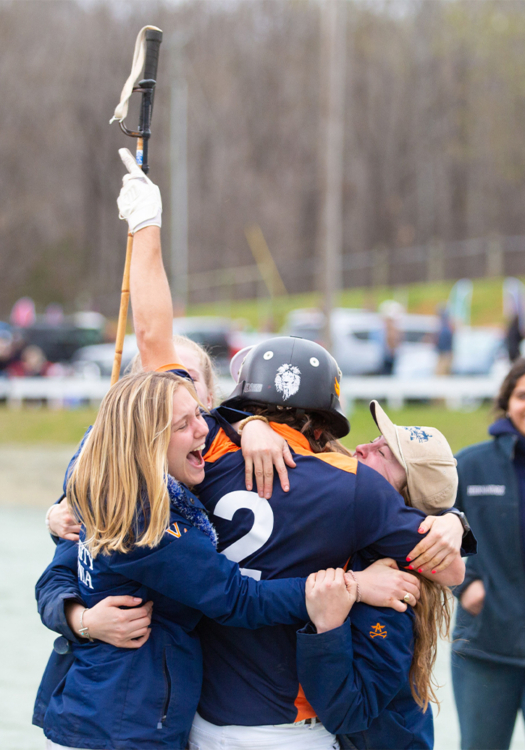 The significance of the moment for both teams was evident after two years of cancellations due to COVID made the 2022 edition more meaningful for the players who missed two years of competition. Following in the footsteps of the women before them, UVA secured the double-victory in their home arena, capping off an exceptional week at Virginia Polo Inc., a place that means so much to the players who have worked tirelessly to get to this moment. “I’m so grateful to this place for giving me the opportunity to play three times a week and prepare for this like nowhere else,” exclaimed McLean. 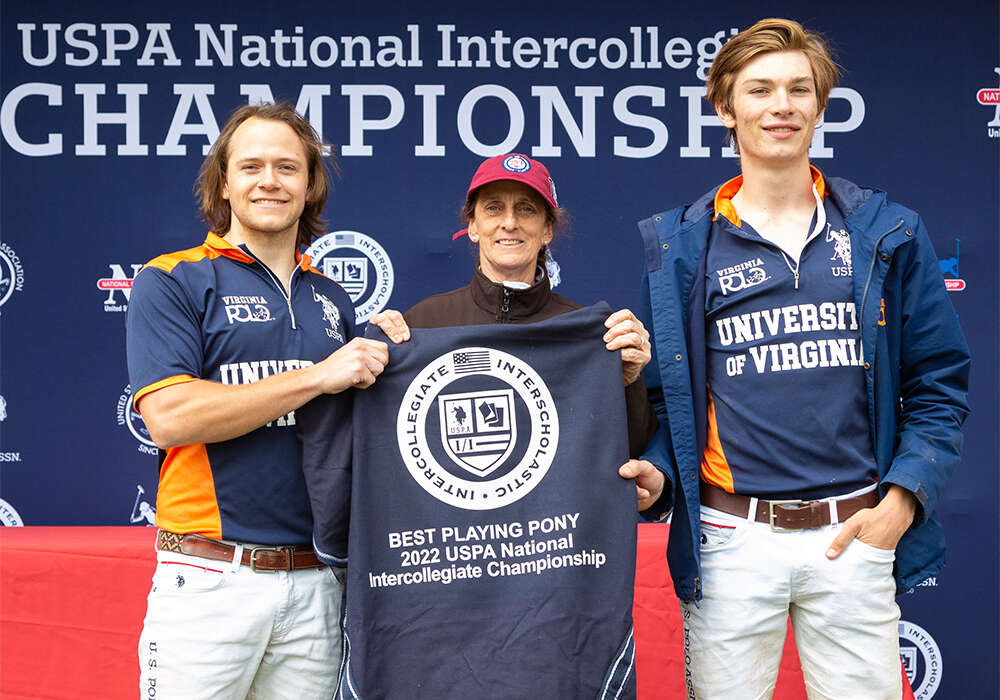 Celebrating the titles, coach Lou Lopez beamed with pride at both team’s successes as well as having showcased an elite event at Virginia Polo Inc. including dragging the arena numerous times to combat wet conditions. “I’m still dizzy,” laughed Lopez, but it was worth it as he shared what the moment meant to him. “After two years of COVID to produce two top national championship teams is a dream come true.” He continued by saying, “They were not easy games for either team to play. My goal was to get these kids to play the best polo they could possibly play, and I think they did that today.” 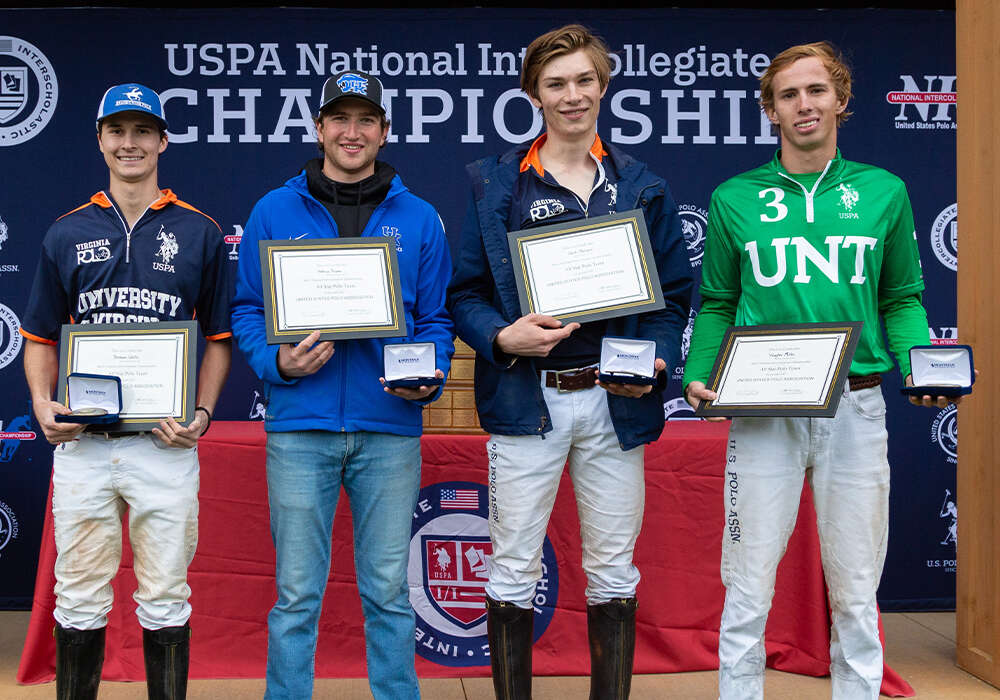 Along with the two titles, UVA won Best String, providing exceptional horses for all participants. “We had a lot of horses here, and I am happy that people appreciated the type of horses that we were able to offer,” said Lopez. A legend at UVA, originally donated by Scott Devon, Nemo was named Best Playing Pony. Played by Parker Pearce in the sixth chukker of the final, he commented on the notable UVA horse. “Nemo has been here since the dawn of time it seems like. I’m so happy to see him win that award after all the years he has given us.” Providing context, Pearce first came into contact with Nemo at a young age. “When I participated in the UVA camps in high school he was here. He is steady and he is going to do everything you want and all you have to do is play the game.” 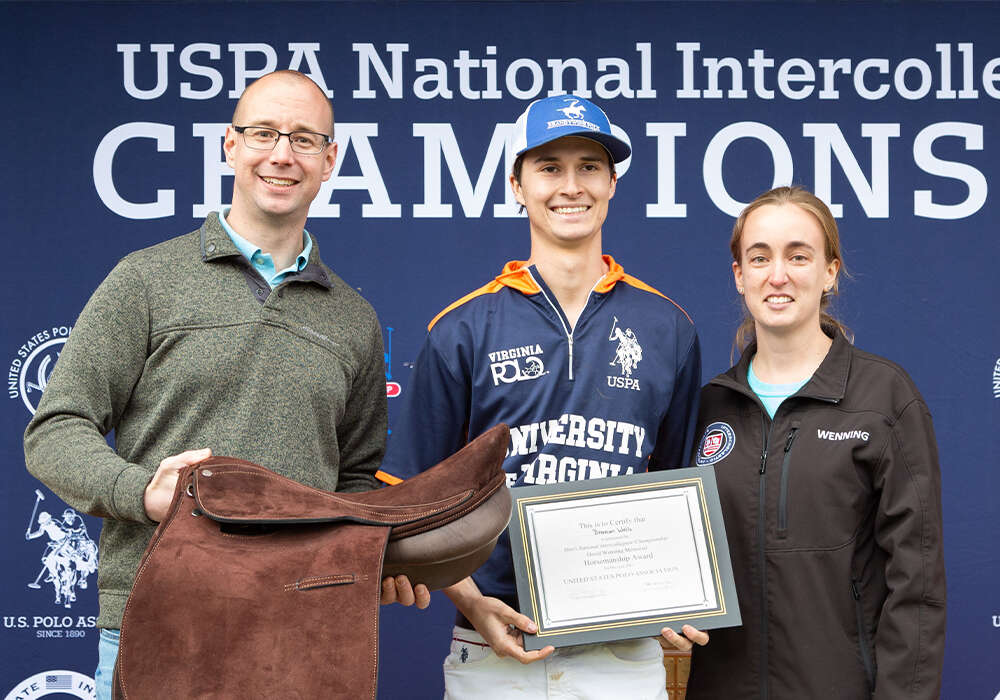 Highlighting the exceptional week of competition, Jack McLean, Brennan Wells, Vaughn Miller Jr. and University of Kentucky’s Federico Puyana were named All-Stars. Brennan Wells was also presented with the David Wenning Award for horsemanship and Joaquin Arguello (Texas A&M) received the Connie Upchurch Award for sportsmanship. Both McLean and Wells graduate this year, but leave a legacy of polo at UVA of quick transitions and team polo. Reflecting on the memorable victory, Pearce said “it felt like every goal we scored in the second half, every man touched the ball and I think that’s how the arena game should be played.”

The Men’s National Intercollegiate Championship Final will air for the first time on ESPNU. Relive the action, Sunday, April 17 at 7:00pm ET. 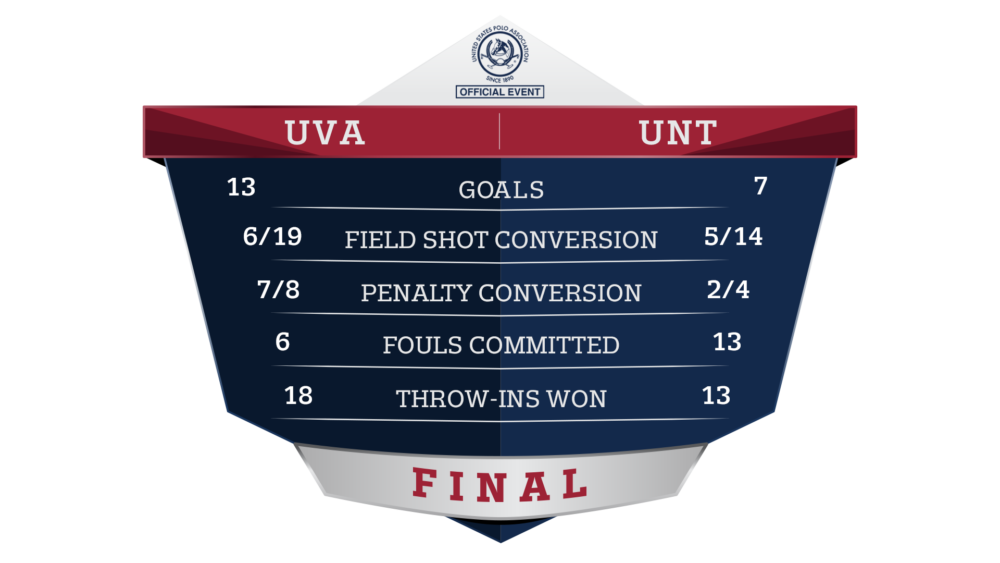 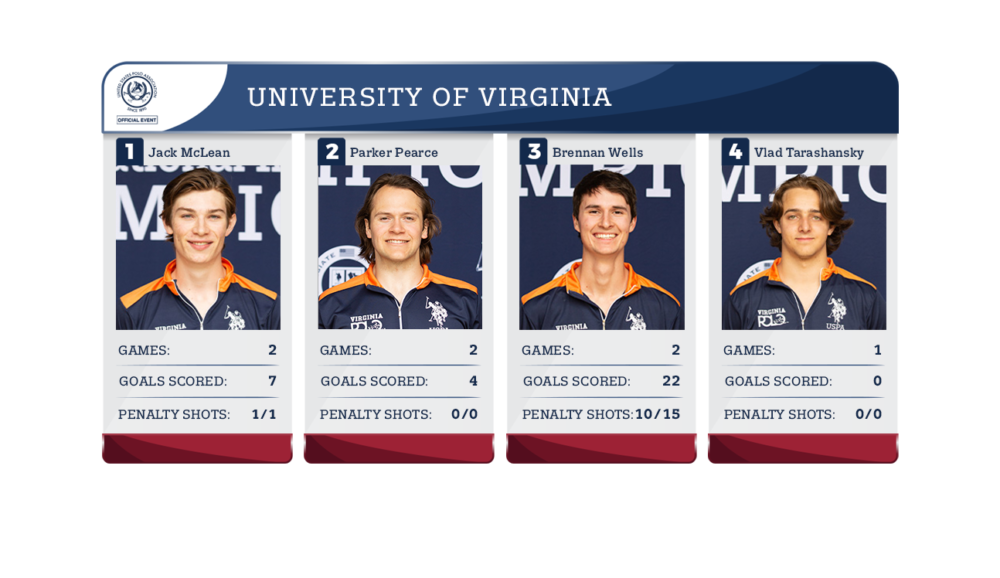 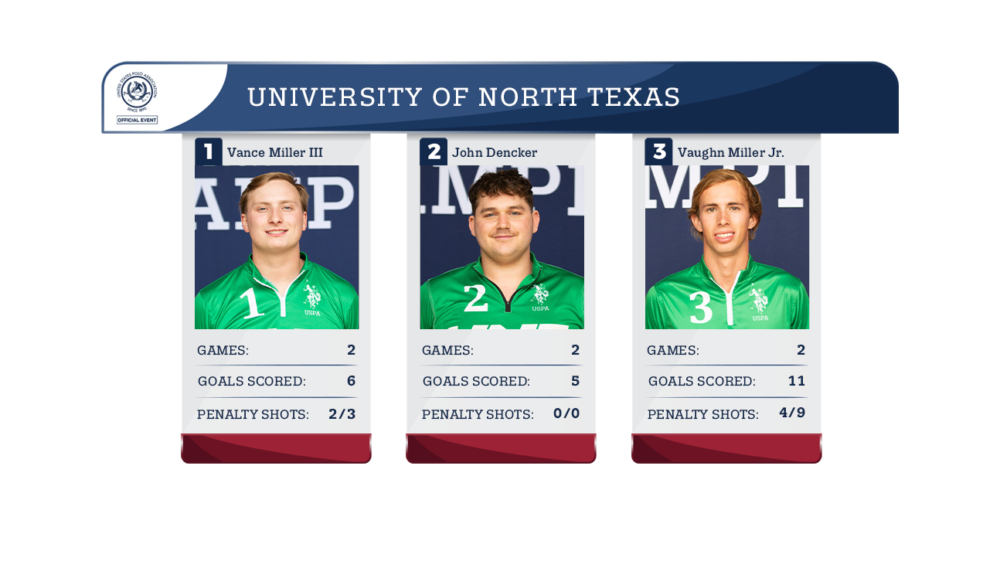 All photos courtesy of ©Oana Moore.